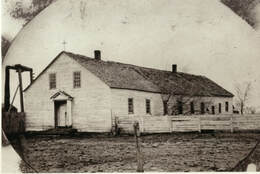 The Original St. Francis Catholic Church Sat Just West of the Existing Rectory. (Photo - Osage Mission - Neosho County Historical Society)
The longevity of the Johnston and Speake family stories, as they made their ways through St. Mary's County, Maryland; and eventually, to John and Teresa's wedding at the original  St. Francis de Heironymo log church at Osage Mission on August 8, 1876, backs Randy's comment!   Even after their arrival in southeast Kansas, they have crossed lines with a lot of our other older families.  In researching this family, Randy found ties with his own Jarboe family, Parsons, South Mound, etc..  This is a web of information that cannot be covered here, but we will try to give you an idea of the the Johnston  -  Speake family details that are in Who's behind the Window?. ​
We won't go all of the way back here — not enough room.  We begin with the grandparents of donor John Aloysius Johnson (1847-1923).   William Waller Johnston (1764-1823) and his spouse Ann Bunker (2770-1834) were born in St. Asaph's Parish, near Bowling Green Virginia.  Together, they raised ten children.  Ann Bunker Johnstons Grandfather, William Bunker (1758-1843), was the Surveyor General of the colonies.  After Williams death in 1823, Ann and family acquired land in the Wax area of Grayson County, Kentucky.  This is where lines between the Johnston and Jarboe families began to cross.  Records show a large number of Johnstons and Jarboe's interred in area Kentucky cemeteries — Ditto our own local cemeteries. [1]

Ann Speake's early family members were colonial settlers Thomas Speake and his wife Elizabeth Bowling, from England.  They started a family in St. Mary's County, Maryland.  As the family grew, subsequent generations spilled into Virginia, Kentucky, Ohio, Indiana, and southward into the Carolinas, Georgia and Alabama.  Who's behind the Window? goes into quite a bit of detail about the origins and variations of the Speake name and some of the family migration routes.   But seven generations later Teresa Elizabeth Speake (1852-1938) was born in Grayson County, Kentucky to William (1810-1874) and Mary Eades Speak (1817-1858).  After Mary's death, and the Civil War, William found his way to Osage Mission in about 1868.
Enough with lineage — that is what the book is for.  The 1867 marriage of John and Teresa started one of the most respected families in Neosho county.  They were known for excellence and innovation in farming.  They had eight children: Pius Fredrick, Charles Roy, Paul Bertram, Francis A "Fanny", Mary Estella Johnston Brown, John Omer, Joseph s. and N.N. Johnston.

In time, the Johnstons migrated from Mission Township down to Lincoln.  The Johnstons were farmers and cattle ranchers who also played an important part in the founding and early growth of South Mound, Kansas.    In 1903, Teresa Johnson was active in soliciting to have a Catholic Church built in South Mound.  On June 4, 1905 the New St. Joseph's Catholic Church held its first Holy Communion Service.  By 1906 John was referred to as a Big South Mound Merchant in the St. Paul Journal; and he was instrumental in getting gas, telephone and water routed into town.

The following clip regarding and 1915 wolf drive will give you and example of the St. Paul, South Mound and Parsons names that appear in the Johnston section of Who's Behind the Window?:

(Source: ww2dbaseUnited States National Archives)
Lt. Lawrence Raymond Johnston.
The Johnston section of Who's Behind the Window? concludes with an interesting but unfortunate article about John and Teresa's grandson Lawrence Raymond Johnston.  Lawrence was the youngest son of Charles Roy Johnston and in 1942 he was a college student and roofer in Davenport, Iowa.  On June 12th, 1942 he enlisted in the Marine Air Corp.  By January of 1943 he was a second Lieutenant Corsair pilot and in July he married Mary E. McDonald.   Lt. Johnston saw some quick transfers before assignment to Marine Fighter Squadron 113, Marine Air Group 31, Fourth Marine Base Defense Air Wing, Fleet Marine Force, San Francisco.   Unfortunately, he was listed as missing in action in July of 1944.  The book contains about three pages about Lt. Johnston and his fighter squadron.  We salute Lawrence Raymond Johnston for his service and courage. 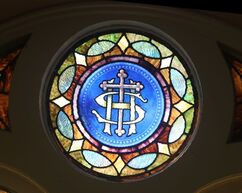 The J.A. Johnson & Family stained glass Window is Adorned with the Greek Symbol of Jesus — IHΣΟΥΣ. This symbol is known as the I. H. S. Cross. (Photo R. Brogan)
Some Reference Information.
1.  To further substantiate Randy's comment above, we have heard it said that walking through some Kentucky Cemeteries was similar to walking through St. Francis Cemetery at St. Paul.  A few years ago we had the opportunity to walk through the cemeteries at Holy Cross and Manton Kentucky, as well as the Loretto Motherhouse Cemetery at Nerinx, Kentucky.  There are many, many familiar names:  Norris, Graves, Owens, Johnston, etc.

2.  As with all of the website donor pages, the above is a snapshot.  This entire page is about the size of a brief magazine article — about 900 words.  The Johnston section of Randy's early draft is twenty pages long and was still under development when this page was laid out.  There is much more information including research data, newspaper articles, obituary clips, etc., in the book.

3. In the early days of Osage Mission and St. Paul, there were many devout Catholics and an impressive number of religious vocations.  The Johnstons are a good example.  Three Johnston women entered the convent:   *  According to record, she went under the guardianship of her older brother for health reasons.