A few years later records show that Thomas and Mary had traveled to Dodge County, Nebraska, at about the time the county was formed.  Presumption suggests they had moved to Nebraska to take advantage of Kansas-Nebraska Act farmland acquisition opportunities.   In any case by 1857 Thomas had become active with the commissioner's court of Dodge County and took part in a reorganization.   By 1860 it seems evident that they were doing better than many early immigrant settlers.  They were farming, with a family of five children, and the value of their personal estate was $1,250 ($38,615 in 2020 dollars).  Perhaps this was a preview of their future success.

The Fitzsimmons' were devout Catholics and that might have drawn them to the brand new town of Osage Mission in 1868.  Unlike many upstart frontier towns, Osage Mission already had a Catholic Church.  Existing  Indian schools were being retooled and staffed by experienced Loretto,  Jesuit and lay teachers.  They took up farming in Mission Township and by 1870 their personal wealth had increased to $9,000 ($179,000 today).   Mary's brother David and family also settled in Mission Township for a while, but they eventually moved Oregon and never returned.

At this point, we can fast-forward through many details laid out in the book, Who's behind the Window?.  But on May 18, 1880 tragedy struck.  One of Osage Mission's earliest settlers, Thomas Fitzsimmons. died in his home of dropsy [1].  His funeral was held in the original log church. 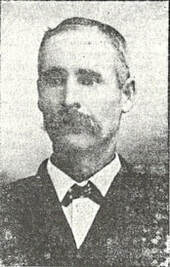 Basil B. (B.B.) Fitzsimmons
it might seem like Mary had the rug jerked out from under her.  Suddenly single, with farming operations and six children.  But the Fitzsimmons were strong and several of the children were mature.  Three of the boys had attended the St. Francis Institute college at Osage Mission and had distinguished themselves with good grades.  New businesses with the Fitzsimmons name were started and the farm and family continued to do well.
​
At around the turn of the century two of the Fitzsimmons men again distinguished themselves by taking on a couple of ventures that ranked in both local and national events:
When St. Francis de Heironymo Catholic Church asked for help to buy windows in 1900, Mary was in a fine position to step up.  She and her husband had been successful and had raised a remarkable family.   She had only a few years to enjoy it.  On March 21, 1906 Mary Bloomer Fitzsimmons was interred at St. Francis Cemetery.  He brother David, who traveled to America with her, passed in October of 1916 at his home in Portland, Oregon.
Note:  The above is a very brief overview of the Fitzsimmons family story.  Like other window donors, the family was well known, active in church and civic events, and some members held political positions.  The study of the Fitzsimmons family is a study of early life at Osage Mission and St. Paul; and the many other families who crossed paths with Thomas, Mary and the family are mentioned in the book "Who's Behind the Window?".  The Fitzsimmons section of the book is about 24 pages in length.