The Dimond Sale and Family.
The Dimond Estate Sale attracted a large crowd of bidders and curiosity seekers from several states.  The unusual collection of antiques and machinery appealed to the varied interests of collectors and machinery enthusiasts.  This was no small wonder.  The Dimond family, who had accumulated several acres of antiques, were among the more interesting settlers in Southeast Kansas. 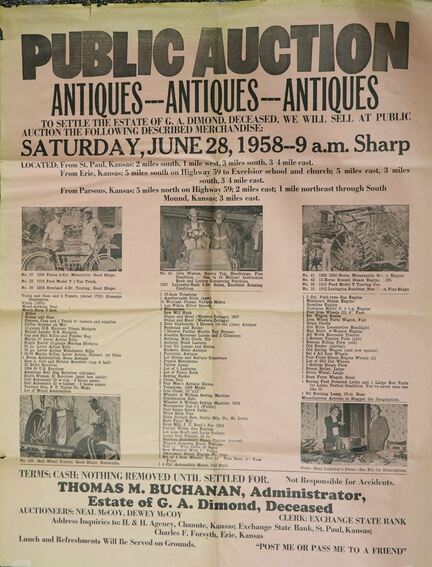 Dimond Sale Bill. Click to Open or See Note 5 for a higher resolution copy.
An article in the July 3, 1958, issue of the St. Paul Journal stated “All in all, the Dimond antique auction will probably be remembered in this community for quite some time.”  That article, written by Fielding S. Hopkins, described a large estate auction that was held at the farm home of the late Guy Allen (Al) Dimond on Saturday, June 28 of ’58.  Early newspaper estimates from Wichita and Kansas City, as well as St. Paul, predicted the sale would attract 4,000 to 5,000 people from a large area.

​Estimates were accurate.   The final attendance included more than 4,000 people from Kansas, New Jersey, Florida, Iowa, Washington, Nebraska, Missouri, Arkansas and Oklahoma who were on hand for a very unusual offering of antiques — items that spanned many interests as well as years.
​
Why?  It was well known that the Dimonds were a very unique family and Al Dimond never threw anything away.  Also, he and his family members had a broad range of interests that led to the accumulation of steam engines, automobiles, a rare motorcycle, guns, rock collections, books, a telescope,  a grist mill and items way too numerous to list here.  Open the sale bill for a partial list of the items that caught the attention of many. 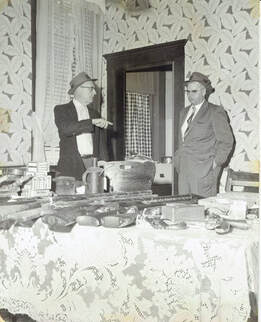 Fielding Hopkins (L) and R. C. Buchanan look over the gun and ammunition collections
​Al Dimond had passed away on April 1 of 1958.  Other that one sister, Myrtle, Al was the last survivor of the pioneer family who were known locally as being eccentric, a little reclusive but also smart.  After Al’s death planning for an estate sale got underway.  It quickly became evident that it was going to take a team of experts to sort through and liquidate the large collection of items stored and scattered around the home and farm which was located about five miles south of St. Paul, near the Big Island.

​The Exchange State Bank was appointed as estate clerk with R. C. Buchanan as guardian.  His son, Thomas Buchanan, was appointed as the estate administrator.  After an initial inspection, the Neosho County Probate Court appointed three appraisers; Raymond Carter, Fielding Hopkins and Marvin Snider to uncover and remove the many items from the home, farm sheds and adjoining fields.  Large trucks and a tractor were employed to tow some machinery into the central auction area.  Working with County Attorney Charles Forsyth, it took the appraisers eight days to recover and list all of the items.

Appraisers Marvin Snyder and Raymond Carter inspecting an old steam tractor.
​Come sale day, the McCoy Brothers Auction Company of Chanute had five people on hand to conduct the sale.  The Exchange State Bank also had a team of five to assist in all phases of clerking the sale.   News media included reporters for the Kansas City Star, the Wichita Beacon and a photographer from Life Magazine.  Buyers from the ten states represented remarked it as one of the best conducted sales they had ever attended.

​A Personal Note.
At the time of the sale I was eleven years old.    Our Boy Scout Master, Murrell Volmer, arranged for our troop to provide a concession stand for the sale.   That gave us an opportunity to be on-site during Friday's  final preparations.   After setting up tables, stock tanks for ice and other provisions for the next day’s sale we were able to walk around the site.  I was able to climb up into the very rare 1904 Winton touring car, via its rear door, sit on the 1909 Pierce motorcycle and handle a few of the guns.  I remember a large rock collection that included several pieces of rose carved sandstone.   As “part of the team” the Scouts were able to do and see a lot of things we would have missed on sale day. 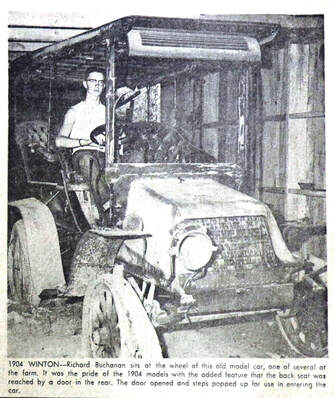 Richard "Buck" Buchanan checks out the 1904 Winton "surrey topped" motor car.
On Saturday, the twenty acre parking area, controlled by four parking attendants, filled early.  Overflow parking lined the country road for hundreds of feet from either side of the Dimond farm lane.   We were thankful for the Friday preview because on sale-day we were BUSY!    I cannot recall our entire concession menu, but I do remember the large circle of tables shaded by a huge tree, tanks full of soft drinks chilled in ice, five-gallon ice water cans similar to today’s plastic Igloo jugs but made of galvanized metal.  Cone-shaped paper cups kept folks hydrated for free, but we did a brisk soft drink business.   As the day warmed  and the ice began to melt, dipping into the stock tanks for glass bottles of Coke or Pepsi became a stinging, cold task — but it was fun.  This sale attracted four to five times the population of our hometown.  We knew we were an important part of a pretty big deal! 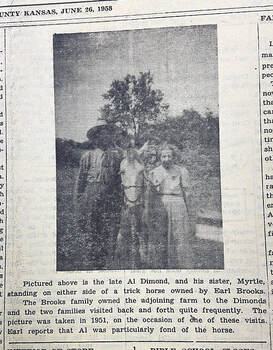 Photo of Al and his sister Myrtle Dimond taken in 1951. (Source June 26, 1958 St. Paul Journal.
​The Dimond Family.
Perhaps one of the things that made the Dimond sale so interesting was the family itself.  In writing an article about the upcoming sale, Fielding Hopkins said: “The Dimond family are definitely pioneers of this 111 year old community … and in making an inventory of their personal belongings one can readily see results of pioneers, their way of life … the things they treasured, the things they undertook. The pleasures they had, the many other things the present day folks would call ‘hardships … all in all, just their every day way of life.”  (St. Paul Journal, July 15, 1958)

The Dimond family was truly of pioneer stock.  Al Dimond was born in Kentucky and came to Kansas with his parents who made the trip in a covered wagon.   Besides Al, there were three brothers and three sisters.  At the time of Al’s death, only his sister Myrtle survived.   None of the brothers or sisters ever married.

For a family who kept a private lifestyle, they were fairly well known.  It is believed that Al and his siblings did not attend public schools but were home-schooled by their mother.   Apparently they were well-schooled.    Many considered Al and some of the brothers to be geniuses.

In early days the family operated the Dimond Rock Quarry which was located just west of the Big Island in southern Neosho County.  Even in later years they might have continued some quarry work because the sale included some well-kept stone tools.  Later they did considerable logging and lumber work.  Their home was built from native lumber with boards wider than most locals had seen.

Al Dimond was a steam and mechanical engineer who claimed much of the family’s reputation for brilliance.  He and a brother built the first water plant in Parsons, Kansas.  The brothers farmed, worked and hobbied with automobiles in an era when automobiles were considered an oddity, not hobby material.

Al, a brother and perhaps other family members, attended the St. Louis Exposition in 1904.  Folders from the Exposition were still at the home.   At the Expo, they viewed, and became enamored with the 1904 Winton automobile which was manufactured by the Winton Motor Car Company of Cleveland.  Four years later a 1904 Winton was shipped, by rail, from Cleveland to Parsons and into the possession of the Dimonds.

The Dimonds love for things that ran didn’t stop with the Winton.  Jessie Dimond purchased a 1912 Lexington Roadster that was in good condition when auctioned.  In 1916 the brothers bought an Overland touring car from the Dowd Brothers of St. Paul.  In 1918 they obtained a Ford 1-ton truck and later a 1919 Ford touring car —later a new 1937 Lafayette made by Nash.  These cars were offered at auction along with an assortment steam tractors, gasoline and steam engines, farm implements and other items that were part of the Dimond’s “every day life.”

In addition to engineering, Al Dimond was a businessman.  He was the business manager of the Dimond Group.  On October 8, 1914, the South Mound State Bank was organized with F. M. Denton, president, G.A. (Al) Dimond vice president; T. J. Ousely, cashier.  In November of 1934 the bank moved to St. Paul and its name changed to Exchange State Bank.  Al served for a short time as a member of the board of directors for the Exchange State before retiring from banking.
A Sad Side Note.
As noted above, the story about the Dimond sale appeared on the front page of the July 3, 1958 St. Paul Journal.  On an inside page appeared Myrtle Dimond’s brief death notice:

​Myrtle Dimond Dies
Miss Myrtle Dimond, last surviving member of the Dimond family died at noon Wednesday at the Erie nursing home where she made her home.

She was a sister of G. A. (Al) Dimond, whose estate was liquidated Saturday with a sale of old and antique articles which attracted several thousand people from all over the United States.

Miss Dimond was the last surviving one of seven children, four boys and three girls, none of whom ever married.  The family lived on a farm about five miles south of St. Paul.
​
Al Dimond died last April 1, shortly before his 97th birthday.  Miss Dimond’s age was not known.
Funeral arrangements will be announced by the Carson Funeral Home of St. Paul.
​
​ 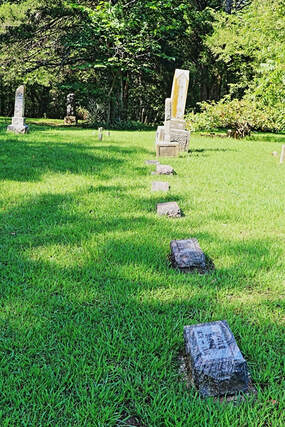 Dimond Stones in Brown Cemetery
​Myrtle’s death ended her family’s story in the St. Paul, Neosho County area.  But memories of the remarkable family remain, even if they are hidden in old newspaper stories and history books.  The Dimonds are buried in Brown Cemetery, only a short distance from their farm.

Brown Cemetery was active from 1865 to 1959.  It dates back to the earliest settlement in Neosho County after the first Osage land cession of 1865 [6].  Al and Myrtle were among the last buried there.  It is nestled in a small clearing among several Neosho River fishing cabins and a home or two.  The cemetery is maintained and we found it mowed, trimmed and "guarded" by three local cabin dogs — one of them was a Doberman.   After some friendly conversation, through the window of our pickup, all three seemed fairly friendly.  So, after a deep breath, I opened the door and stepped out.  The Doberman gave me a lick on the hand, then it seemed to guide me directly to the Dimond graves.

There are eight Dimond headstones arranged in a row through the middle of the cemetery.  Parents William T. and Sara J. Dimond have large stones at the north end of the row.  Six more small stones are laid out toward the south.  Summary information from inscriptions includes: Seven Dimond siblings are mentioned in some newspaper articles and above.  But number seven does not seem to be buried at Brown Cemetery unless the grave is unmarked.  Find A Grave only lists six children with William and Sara Dimond.[4]  Also, in addition to Kentucky roots, some family members appear to be linked to Illinois.
Ron Brogan - A Catholic Mission.org — August 2019
​Some Reference Information:
1. Photo Credits:
2.  Newspaper and other written references: 3.  Thanks to the hard work of David O’Bryan in compiling his “Annals of St. Paul:  The Swan Song of the St. Paul Journal, July 2, 1936 – November 16, 1961.”  His indexed newspaper clips led directly to many of the microfilmed newspaper articles noted above.  His book offers a wealth of research links to early and mid-20th century local history.  If you want more information about this book, or would like to purchase one, follow THIS LINK.

4. Here is a Find A Grave link to the Dimond memorials in Brown Cemetery, Neosho County, Kansas.  As noted earlier it only recognizes six Dimond children.  https://www.findagrave.com/cemetery/92088/memorial-search?firstName=&lastName=Dimond&page=1#sr-25688383