​Joseph joined the Union Army at Indianola, Iowa with the 34th Infantry, of the Iowa Regiment, company "H" and mustered in for three years of Federal Service in October 15th, 1862.   A total of 1081 men served in the 34th at one time or another.  One officer and eleven enlisted men were killed in action or died of wounds, and disease took a terrible toll.  While up north, two officers and 244 enlisted men died of disease.    The regiment was conveyed to Helena, Arkansas, in November of 1862, arriving on December 5th under the command to General Steele.  Shortly after arrival, epidemics of smallpox, measles and pneumonia  claimed the lives of 600 men.

Men and officers, who were fit for duty, joined the expedition of General Sherman against Vicksburg by way of Chickasaw Bayou.  General Steele commanded troops which composed the Fourth Division of the Sixteenth Army Corps and the Thirty-Forth Iowa formed the Third Brigade which was commanded by Brigadier General John M. Thayer during the days of battle, December 27, 28 and 29, 1862, at Chickasaw Bayou.

Private Joseph Gutting was discharged on April 13th, 1863, in St. Louis, Missouri, due to Chronic Malaria.  At that time Joseph was 5' 5" tall with hazel eyes.

After the war the Gutting's are found in Monroe, Madison County, Iowa where Joseph was farming for a living.  The nearest Catholic Church was 46 miles southwest - St. Patrick's in Cummins, Iowa.  By 1874 the family was newly established in Osage Mission, Kansas.  Joseph Gutting is documented in the Osage Mission Journal, on September 25, 1878, as a soldier in the 34th, Iowa Infantry, company H., along with other Civil War veterans living in Osage Mission.  The vets were organizing, and electing officers for the new club. 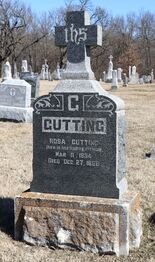 Rosa Gutting Grave, St. Francis Cemetery - Photo Ron Brogan.
​During their time in Osage Mission, Rosa seems to have taken a lead in raising and supporting the family.  While Joseph is active in some old soldiers activities, it is Rosa who is described as putting up a good barn near the rear end of her lot, near the ice-house in August of 1883.  She also erected a two-story dwelling house (hotel) on Main Street in April of 1885.
​​
On November 6, 1898 ​Rosa Gutting had her Last Will and Testament subscribed before J.W. Riney, Notary Public.  It was witnessed by Jacob Koenig and Katherine Koenig.   The will included her children but was silent with regard to her husband Joseph.   Barely more than a month later Resille​, Rosa, Gutting passed away on December 27th, 1898.  The winter of 1898-99 was brutal and Rosa's funeral must have been dreadful.  It is also sad to know that she was buried 4,900 miles from her native Wurttemberg, Germany, and all alone in St. Francis Cemetery.  Her children were scattered from Colorado to Louisiana to Oklahoma to Texas.  Rosa's tombstone, in St. Francis Cemetery, St. Paul bears no mention of Joseph. 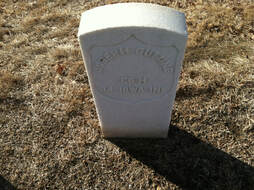 Joseph Gutting Grave - Billion Graves.com
Joseph Gutting suffered from Chronic Malaria since his Civil War days — and perhaps PTSD.    The loss of his spouse, reoccurring bouts with malaria, and senility forced Joseph to be admitted to the  National Home for Disabled Volunteer Soldiers in Leavenworth, Kansas on March 23rd, 1899.  It appears that son Frank, located in Ft. Smith, Arkansas, was his nearest caretaker.  Joseph's stay at the "Old Soldiers Home," was brief.  He passed on July, 18, 1899.  Joseph is buried in the Leavenworth National Cemetery, 160 miles from Rosa. 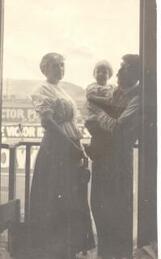 Emma Gutting, Husband Eston & May Otto Ovren Photographed at Victory, Colorado. Shared by Jean Tocco.
The Saint Paul Journal, on February 1, 1900, confirms that it was the Gutting's daughters who donated the Gutting Window.  Daughter Mary Ann was married to George Emmons (no marriage record). After their marriage they traveled to Colorado and Nebraska, eventually landing in Oklahoma.

Emma Gutting married Eston M. Ovren in 1884, likely in Leadville, Lake County Colorado.  There is evidence of several moves and business ventures.  Emma passed in Los Angeles, California in 1917.  Eston remarried and died in 1946.  He is buried at Colorado Springs, Colorado

Josephine "Josie" married an Indiana man, Theodore "Ted" Michael Perry in Bourbon County, Kansas in 1883.  Ted's work took him to Arkansas and eventually to Shreveport, Louisiana.  Ted passed in 1925 and Josie in 1939.  Both are buried in Shreveport.

Perhaps the daughters, realizing their parents could not be buried together, decided to immortalize their union in the glass of St. Francis Catholic Church.
Some Reference Information.
1.  Joseph's status during much of the family's time at Osage Mission is not clear.  Most of the press attention goes to Rosa, and later to some of the family members.  The fact that he seems to be here for a short time after Rosa's death suggests he stayed at Osage Mission, but he is a bit of a mystery.

3.  This  page is only a summary of the Gutting family information provided in "Who's Behind the Window?".   The manuscript includes about 22 pages of information, including some genealogical information on the Gutting children.  There is also mention of local businesses and Osage Mission, St. Paul residents. 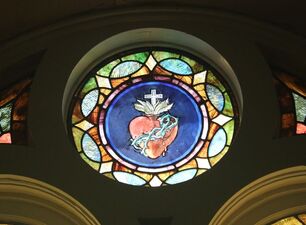 ​The top of Mr. & Mrs. Gutting stained glass (Right) is graced with the Sacratissimum Cor Iesu Representing the flaming power of Divine Love, His thorns of passion and Crucifixion. Jesus boundless and passionate love for mankind.