​St. Francis Catholic Cemetery, St. Paul, Kansas
Collectively, the stories represented by grave markers in St. Francis Cemetery, St. Paul, Kansas, tell much of the story of the birth of civilization, commerce, education and religion in southern Kansas and the four state region.  You have to wonder why the cemetery has not received national attention.
Cemeteries are our ongoing connection with departed loved ones laid to rest within them.  Each grave marker represents a final tribute to a person and the memories of a person’s life.  The collective memories represented by markers within a cemetery, especially an old historic cemetery, tell much of the story of a community’s past.

The collective story told by headstones within St. Francis Cemetery is that of the earliest history of Kansas and the people who led our ancestors here.  The cemetery is, by succession, the oldest in Neosho County known to have been used by white people.  St. Francis Cemetery was started in 1868 which dates to some of the earliest settlement in our area.   But the cemetery also includes graves that were relocated from an early Mission Cemetery that was located on and east of Miles Field in St. Paul.  By about 1871 all of the graves were moved from that cemetery to St. Francis.  Those early graves included Osages, early settlers and at least three of the earliest Catholic Mission missionaries.

See the satellite map at the bottom of this page for locations of the following grave sites. 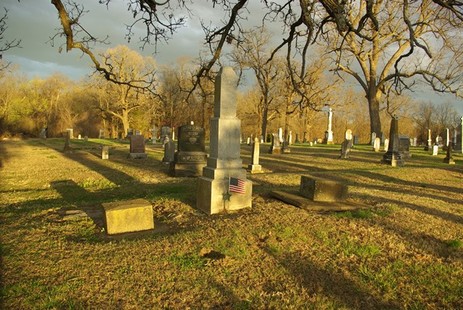 The Osage Grave.
Without the influence of the Osages much of southeast Kansas and northeast Oklahoma would be different.  The economic and political influence they brought with them changed the way Kansas was developed.  Closer to home, without the Osages we simply would not exist and many of our older families who came together here in the late 19th century would not exist.   It was not by their design that the Osages led our ancestors to Osage Mission.  But it was through their persistence during treaty negotiations that they gave us the land our town is on.  We owe them a great deal of gratitude.

The Osage gravesite is on the northeast edge of the cemetery.  It is marked by three stones.  Two 30” sandstone cubes were moved from an earlier mission cemetery to St. Francis and they mark two common Indian graves.  The tall stone marks the grave of Osage-Cherokee Charles Mongrain. Mongrain was a locally influential Civil War scout and interpreter for the Union.  All of these bodies were moved from the original Mission Cemetery that was being crowded by growth of the new town of Osage Mission.  By current standards “common graves” seems harsh but it wasn’t.  Father Schoenmakers had requested all remains in the Mission Cemetery to be moved to St. Francis.  At some point the Indians and likely some settler’s graves that still remained were moved.  Father Schoenmakers had the greatest regard for his Indian brothers and moving the remains was done respectfully.

The Indian graves have fallen into disrepair.  The slabs under the stone cubes have sunken and they are uneven.  In the shady area under the trees grass struggles to grow.  Given the Osages role in our existence, it is a bit of an embarrassment.  Some believe it is up to the Osage to maintain the graves—but after all they are in our cemetery. This area seems like a great opportunity for an organization or Eagle Scout candidate looking for a service project. 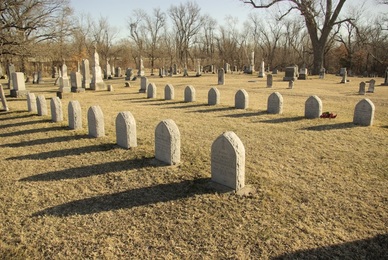 The Osage Mission Missionaries.
The Catholic Mission missionaries are buried in two well-kept parts of the cemetery.  The Jesuits are east of the central crypt and statues, or straight south of the Osage grave site.  The Sisters of Loretto are northwest of the crypt. They are in often-walked parts of the cemetery and yet people pass through not realizing they are among the remains of very special people.  To borrow a phrase from Mother Bridget Hayden’s January 30, 1890 obituary; these are among the most remarkable people that have ever set foot on the soil of Kansas.  I won’t elaborate more here.  Hopefully the remainder of this site, including some of the profiles, will speak for them.

The Jesuit Area.
The sixteen Jesuit Graves are in two rows of eight.  One of the graves, Father Paul O’Bryan Smith S.J. is a modern grave dating to 1993.  The remaining fifteen dates of death range from May of 1852 (Brother Anthony Toelle) and August of 1852 (Father John Bax) to April of 1886 (Brother Joseph Wellner).  The bodies of Brother Toelle and Father Bax were originally buried in the old Mission Cemetery and moved to St. Francis.

All but one of the most notable Catholic Mission missionaries are buried here.  Father Paul Mary Ponziglione is buried in Chicago. 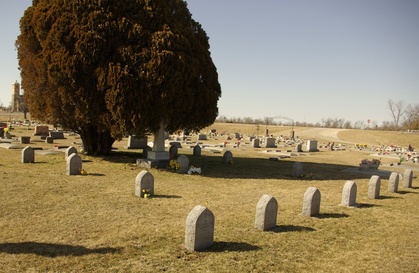 The Sisters of Loretto.
Seventeen of the missionary Sisters of Loretto are buried around a large, round evergreen in the northwest part of St. Francis cemetery.  Mother Bridget Hayden’s stone is directly east and beneath the tree.  The remaining graves are arranged around her stone.   All of these graves were moved.
​
The original Loretto Cemetery was on the grounds of St. Ann’s Academy in an area near the existing museum school house.  In 1930 parishioners were concerned that the small plot was not fitting for the pioneer sisters and the decision was made to move them.  The remains were carefully dug up and identified.  Sixteen of the graves contained scraps of bone, scapulars, rosaries and casket handles.  The decayed casket of Sister Bridget Hayden contained well-preserved skeletal remains and her habit was in good condition.  On September 15, 1930 a reinternment Mass was held in St. Francis Church.  After the Mass the sixteen men carried small, child caskets to the cemetery on their shoulders.  A group of pallbearers carried Mother Bridget’s coffin.  (See Basement Chapel) 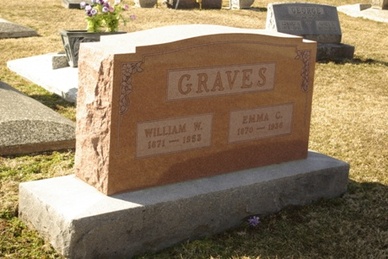 See the note below about Mr. Graves' tombstone.
William Whites Graves.
W. W. Graves is buried just east and slightly north of the Loretto field.  Look for a modern, rose-colored tombstone.  Mr. Graves deserves recognition here because he dedicated much of his life to preserving the story of the Osages and Catholic Mission missionaries.  During his life he also transcended from being a writer and historian to being a historical figure himself.  In May of 1952, only eight weeks before his death, he received a Vatican Knighthood of St. Gregory the Great—the highest honor a Catholic lay person can achieve.  At the same time he also received an honorary membership to the Osage tribe which was rare at that time.  Between 1902 and the early 1930’s he was a very influential member and officer in the Anti-Horse Thief Association.  During his active time with the association the group saw their ranks swell from about 8,000 to 40-50,000 members; and it was Graves organizational skills that are credited with the A.H.T.A’s growth to maturity during that time.

​Note - A bit of Irony:  W. W. Graves was described as the man of a million words—and he got the words right.  If you read his books, or the microfilm of his newspapers, you know he made very few errors.  As he finished his "History of Neosho County, Volume II", his health was failing and he called in helpers.  The introduction to the book included a mild scolding that the work wasn't quite up to his standard.  He wouldn't have been pleased with his tombstone engraver.  Mr. Graves passed away on July 22, 1952 and his stone says 1953!

​There are many other notable graves in St. Francis Cemetery.  I hope to cover some of those in the future.  These include Civil War veterans and some of our founding citizens. 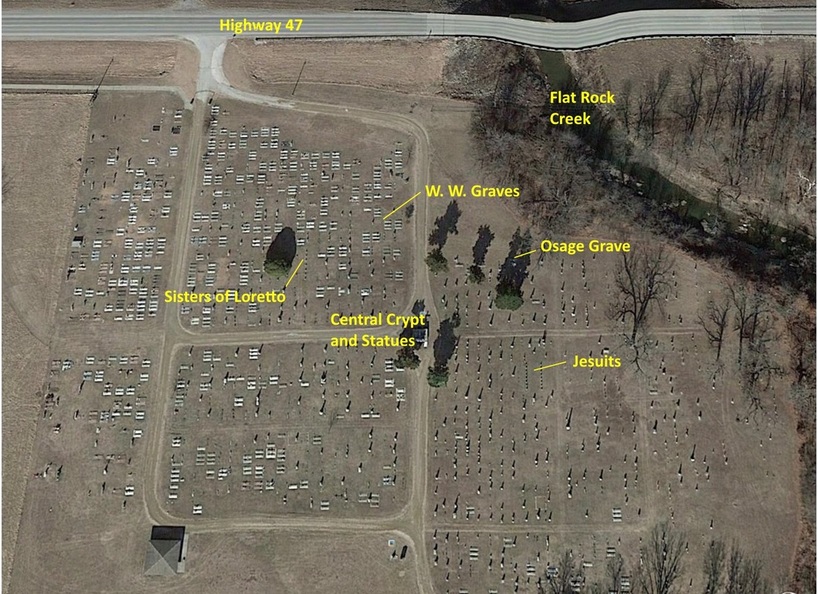