Shared by Sara Noakes
​The first established record found for Thomas is found at Bloomington, Johnson County in central Illinois, 66 miles south of LaSalle, with his marriage to the widow of John Cooney (1841-1865), of Tazewell County, Illinois.  Thomas and Ellen Sexton Carroll were wed on  Easter Sunday March 31st, 1872.  Considering the date it's likely the wedding took place at St. Patrick's Catholic Church  and not Holy Trinity a German orientated church.  The widow Cooney had one child named John Leo Cooney (1863-1940).  The new family remained in the Bloomington for another eight years nurturing five children. Then.... 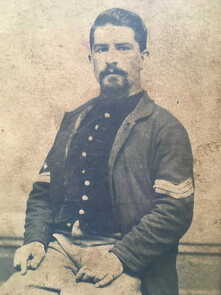 ​There are several links  that associate Daniel Carroll family with Thomas P. Carroll.  We find nothing that connects Thomas P. and Francis Patrick Carroll other than Osage Mission and their Irish heritage.   However it is known that Francis Patrick was a Union Soldier who's unit, Company H, Ohio 68th Infantry Regiment, saw action in a number of prominent Civil War battles —  Battle of Fort Donelson, Battle of Shiloh, Siege of Corinth, Battle of Hatchie's Bridge, Battle of Port Gibson, Battle of Raymond, Battle of Champion Hill, Siege of Vicksburg, Meridian Campaign, Atlanta Campaign, Battle of Kennesaw Mountain, Battle of Atlanta ,Atlanta, Siege of Atlanta, and the  Battle of Jonesboro.
There is much more research information about Thomas and Patrick in Randy Dunavan's book, Who's Behind the Window."  Some of the most interesting information is the number of other Osage Mission, St. Paul names associated with the Carroll's:Religious Vocations.   Also Interesting is the number of religious vocations associated with the donor families.  The Carroll's are no exception.  The following four women became Sisters of Mercy:More information about these women and their family relationships are included in the book.
The book goes into some detail regarding these and other Carroll family members including their history here and family movements across the united states.  It also include more photographs and a transcribed version of the will of Francis P. Carroll.  If you, or family members, are interested in obtaining a copy of Randy's 800+ page book, you can contact him directly at:  ​ randydunavan@cablelynx.com 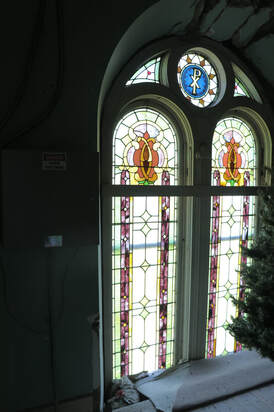 The Upper Carroll Window. (Photo - Ron Brogan)
Notes and Background Information:
1.  The Top of the Carroll Window:
The top part of the Carroll window is seldom seen from the inside of the church.  From the altar servers sacristy, it extends up through the ceiling to a second-floor storeroom located behind an early Passionist chapel.  Wooden 2x4's, bags of insulation, and pieces of carpet serve to isolate the upper from lower parts of the window.  About the only time that room is entered is to retrieve and replace Christmas decorations.

While isolated, the top of the window has it's own story to tell.  It was at this northeast corner that the parishioners began to realize that the church was not settling properly.  In 1910 the entire church was raised to re-stabilize the structure and to add a basement chapel, office and meeting rooms.   In the 1970's the church was, again, stabilized requiring removal of the chapel and office facilities.

The masonry filled cracks at the top of the Carroll window are a hidden reminder of how close we came to not having our church.