​5A. The Catholic Mission Complex.
“The flimsy frame structures grouped on a slight eminence northeast of the Neosho River and west of Flat Rock Creek were known as Catholic Osage Mission.  Much was connoted in the name, although the indifferent exterior of the buildings gave no indication of the potential power within.  That power was the dynamic energy which Jesuit missionaries and Sisters of Loretto expended first on Full-blood and half-breed children, then on Indian adults, and later, on the pioneer white settlers of southeastern Kansas.”
Sister Mary Paul Fitzgerald, “Beacon on the Plains" 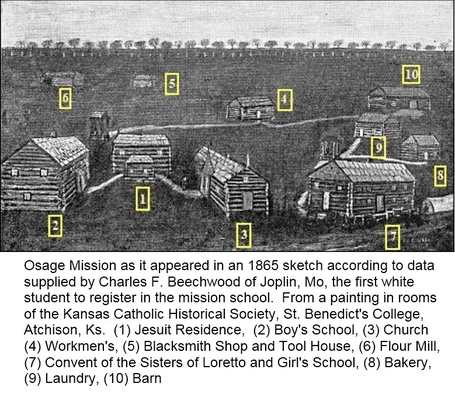 The black and white version of the Beechwood painting has been used for years. A digital reproduction of the painting was recently obtained from the St. Benedict's Abbey, Atchison. The painting is no longer displayed there.
The Mission Grounds.
For those familiar with St. Paul, Kansas, the Catholic Mission was located near the east edge of the present city limits, on the north side of existing Highway K-47.   The iconic “Charlie Beechwood” painting of the Mission shows the ten structures that were on the Mission grounds when young Beechwood was the first white student at the mission schools.  The time was 1865; the Civil War was over; and the legal floodgates restraining scores of eastern settlers were beginning to open.  The Osage Manual Labor Schools were beginning a transition from being Indian schools to admitting white students.
​
The Beechwood image is a historical snapshot of the turning point in our region’s history.  The Osages, who had led the earliest elements of civilization, religion, education and commerce into southern Kansas, were departing and a new era was beginning.  Within ten years many of the Mission buildings would be replaced by stone and frame structures.  In 1888 the last relic of the Catholic Mission, the old log church, was torn down. 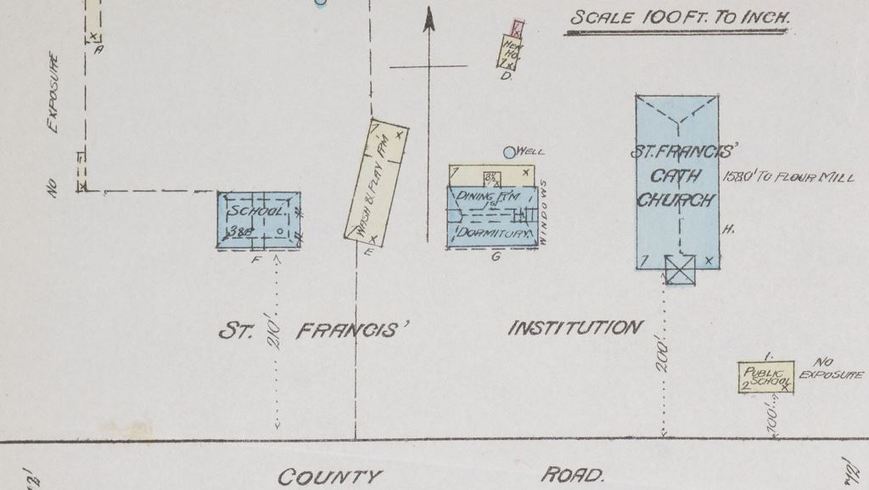 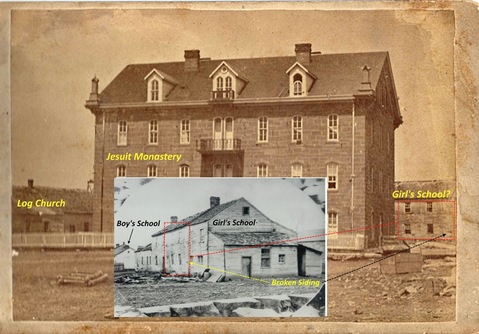 The Jesuit Monastery sat about 80' west of the existing church, or in the same approximate position as the existing rectory. The log church is shown at the left. The building behind the monastery is probably the girl's school.
Nailing Down Locations Based on Available Information.​
I believe that all ten of the structures shown in the Beechwood painting were located in the area between the existing St. Francis de Hieronymo Catholic Church and the existing St. Paul schools campus.   The bakery and laundry buildings might have been north of, or even within the footprint of the existing church at one time—I am not sure. However, in comparing some early photographs, with a 1885 Sanborn Fire Map (above) showing the position of the old log church; some assumptions can be made:

First, as described on a separate page, and the figure above,  the log church sat about 215 feet west of the existing church.  For some reason it sat at a 13 degree angle from south toward northeast.

Second, we have a photo of the Stone Jesuit Monastery that was completed in August of 1872.  We also know it sat just east of the existing church in about the same position as our existing rectory.  That photo provides two important visual references: 1) The north end of the log church is shown just west of the monastery—matching the Sanborn Map.  2) A building in the background, to the north of the monastery is almost certainly the Osage School for Girls.  It had not yet been razed. 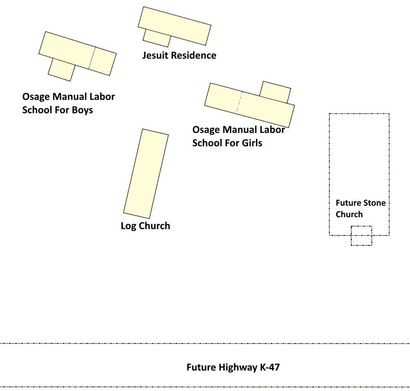 Sketch of the four main buildings as they might have been arranged in 1865. (not to scale)
​Third, we have photographs of the Osage Manual Labor School buildings individually; and the photo of the girl's school building, shows the boys building sitting end-to-end and at least 100 feet away (west).  With these three references the positions of three of the main structures can be estimated as shown here.  A fourth main structure, the Jesuit residence, is estimated based on its position in the Beechwood painting.  Were all four buildings laid out at the same 12 degree angle as the church?  That is hard to say.  But the view of the girl’s school behind the Jesuit Monastery suggests all might have been at an angle.

A Comparison With Beechwood.
If you are comparing the photos and this sketch with the Beechwood painting you have noticed some discrepancies:  1) The boy’s and girl’s schools do not sit end to end.  The girl’s school is in an east-to-west orientation.  The boy’s school is more south-to-north.  2)  The church is shown directly between the two school buildings (and it also has an attached steeple instead of the timber-frame bell tower).  3) All of the buildings in the painting are shown with log exteriors even though photos show clapboard-covered exteriors.  Did Charles Beechwood draw it wrong?

The answer might be that the Beechwood painting was done, from his memory, in 1930--sixty-five years after he entered the school!   By 1870 the schools were in transition and some of the log structures were being replaced with stone and frame buildings.  As to log exteriors shown in the painting, it is probable that the interior of many of the buildings still had chinked, log walls.  He spent his classroom hours inside of those buildings and the logs might have left a visual impression on his young mind.  With all things considered Charlie Beechwood had a remarkable memory at age seventy-five.

Note:  It is very probable that Charlie Beechwood had the painting done, from his memory and descriptions, at the request of W.W. Graves.  An article in the December 18, 1930 St. Paul Journal announced the painting was completed and would be given to the Kansas Catholic Historical Society after a brief viewing in St. Paul.  W.W. Graves was the editor of the Journal.  He was also a founding member of the KCHS.  During his time with the society he served as secretary, vice president and president.  The KCHS was originally part of St. Benedict’s College, Atchison, Kansas.  The school has since become Benedictine College and the KCHS has closed.  But much of the KCHS archive is now curated by the St. Benedict's Abbey in Atchison.  The color illustration below was digitized at the Abbey in March of 2016. 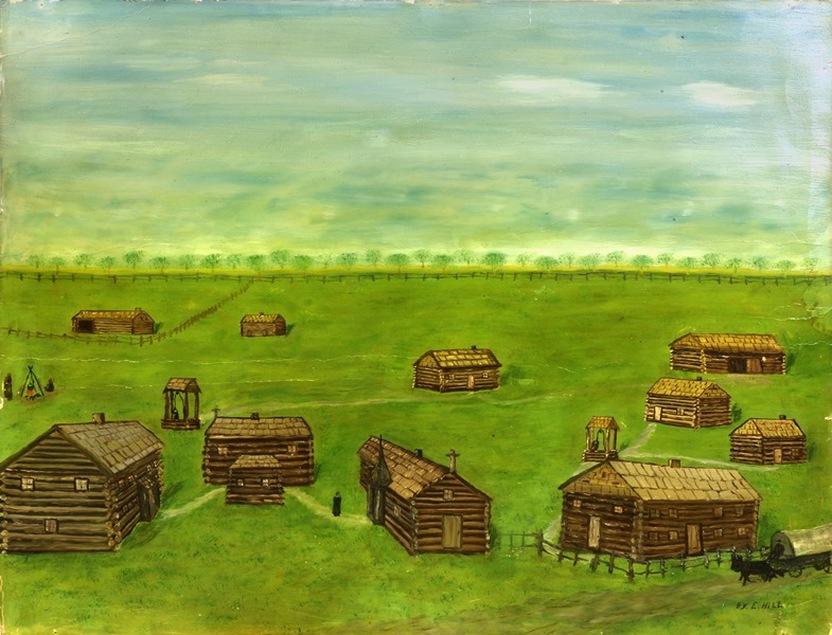 The original painting was done on a piece of heavy cardboard that is about 22" wide. The contrast of the color version provides more clarity than previous black and white copies. Considering age and material, it is in pretty good condition. It appears as though the painting was done for Charlie Beechwood by "E. Hill."
Some Reference Information:
The sketch of the building locations, and my discussion, is based on opinion and the information below.  It is also based on quite a few years experience in working with engineering drawings and graphics.  Maybe I see things a little differently than some.  I would certainly like to keep the discussion going if anyone has any other information; or is seeing things differently.  Pulling together "facts" from old data is a challenge—but it can be fun.