St. Paul, Kansas — In the 1890's (In Scale Model Form)
​When Mary Paula and A.J. Goodsel made their annual trip home for the 2018 Memorial Day, Mission Days Celebration, they brought us a historical treasure.  It is a scale model of our Osage Mission/St. Paul business district as it looked during one of our most turbulent periods — the 1890’s.
​There is a truly remarkable display going together at the Osage Mission–Neosho County Museum in St. Paul.  A scale model of 1890's Osage Mission – St. Paul lays out one of Southeast Kansas’ most historic towns as it looked during the 1890's.  The display, including its permanent mounting base, details and interpretive materials will be evolving during the next several months.  If you are interested in area history, or if you are a model enthusiast, it is well worth your time to stop and take a look at it now.  Then come back in the future as it is completed!
The Model.
The model is built to a scale of 1” = 10 feet.  That scale allowed A.J. Goodsel to replicate an area represented in early Sanborn Fire Insurance Maps [1] within an 8-foot square platform.   The platform is actually split down the center of County (now Central) Street.   This allowed easy transport of the model and it can be arranged so viewers can ‘walk down County Street’ and view businesses on both sides of the street.  By the way, the businesses have windows and the windows show merchandise and customers inside of the buildings!
​The layout made its St. Paul debut on May 26, when it was shown briefly in the entry foyer of the St. Francis Parish Hall during the Mission Days kickoff breakfast.  It was then loaded on a trailer that was part of the Mission Days parade.  Then it was a center of attention during a two hour showing at Central and 5th Street.  From there it was moved to the Osage Mission–Neosho County Museum which will be its permanent home.
It is Not Finished.
The model has been temporarily placed on tables in the entry lobby of the museum and the platforms are separated allowing the ‘walk down County Street.’  The tables will be replaced with permanent base cabinets, trim, display cards and other refinements consistent with a high-value exhibit.
​
The model itself will continue to evolve.    A.J. plans to build three additional buildings including the Giddings Mansion (later the original Carson-Dick Funeral Home), another early home, and a building that housed a horse-drawn fire pumper wagon.  It will also be detailed with several wagons, carriages, and human figures to add to the realism of an already remarkable scene. 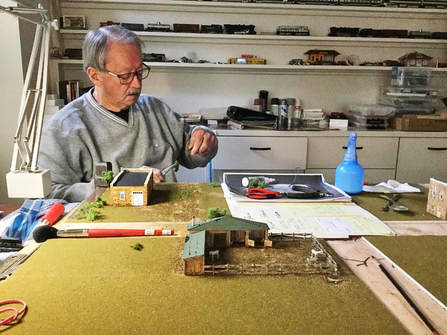 A.J. In His Home Workshop , Modeling Studio.
The Artist and His Project.
A.J. Goodsel graduated with the St. Paul High School class of 1961.  Like many of us, he moved away, but left a large piece of his heart here, along with some family.  Over the years he has supported the Osage Mission–Neosho County Historical Society and Museum.  But as they say, he outdid himself with his model project — it is truly a labor of love.

​The project required more than three years to get the layout to its present configuration.   A.J. emphasized that a large amount of that time involved planning and research.  He initially planned to use the popular HO railroad scale (1” = 8’) which would allowed use of HO model parts and details.  But the platform would have been much bigger.  Transitioning to the 1” = 10’ scale made the model more manageable but created quite a few challenges that had to be dealt with.  Among the problems was fabricating some correct-scale detail pieces instead of simply purchasing them.

​Research for many of the buildings involved studying the period Sanborn maps, finding photos and locating other information for each of the structures.  He relied on the works of W.W. Graves, internet sources, and photographs of the downtown area.  He had some valuable help.  A couple of old friends, Fred Madl and Jack Burnett provided many of the photos from their own collections.  Family members Margaret and Felix Diskin served as his research liaison between the local museum and his home workshop. 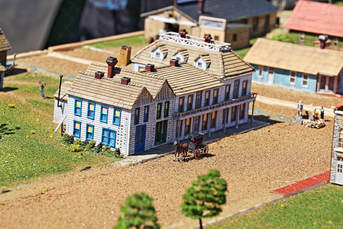 The Southern Hotel Presented Some Challenges.
​In some cases, he had to rely on extensive research, interpolation, and his imagination.  For example, the Southern Hotel, which sat on the northeast corner of Central and Main, shows up in Graves’ writing and newspaper stories.  It was a large, well-appointed popular lodging and meeting spot.  But photographs do not seem to exist.  The Sanborn fire maps provide the location, footprint and general idea of the construction methods — frame construction in the case of the hotel.  A.J. had to rely on written descriptions and insurance documents for details of how it was built, roof materials, windows, and other details.  The product of his persistence is an opportunity for us to visualize an impressive hotel that has been gone for well over a century.
Some Leeway.
While the model generally depicts the 1890’s, A.J. left himself some flexibility to show other important downtown features.  For example, the Peerless filling station on the northeast corner of Central and fifth streets did not exist until around 1910.  But that was about the time when autos started showing up in St. Paul and it also provides a visual reference for folks who remember the Grillot service station in that building.
The Period.
The 90’s were a turbulent and transitional period.  We entered the decade as the town of Osage Mission and left as St. Paul.  Most importantly we lost two influential frontier boarding schools and the missionary religious orders who founded the Catholic Osage Mission.These events, combined with the loss of the county seat position more than a decade earlier, might have shortened the life of a lesser town.  But there was a silver lining.  By 1894 the Passionist order established a presence here that blossomed during the 1900’s.  Also, in 1896, one of the last graduates of St. Francis Institution returned home to establish himself as a newspaper editor, historian, publisher, entrepreneur and national law enforcement official.  Before his death, W.W. Graves also distinguished himself and his community when he became a Knight of the Vatican.  See note 2, below for more information about the turbulent 90's and beyond.
Some Reference Information:
1.  The Sanborn Fire Insurance maps are invaluable for historic research because they freeze the configuration of parts of many communities at certain dates.  The maps are drawn to scale and they provide a measurable scale to estimate sizes of lots and buildings.  They are also color-coded to indicate the materials used to build individual structures (Ex. blue = stone, red = brick, yellow = wood frame.  Combinations can show red brick on a yellow wood frame building).  The Spencer Research Library at the University of Kansas has recently made many of the maps available on-line at https://lib.ku.edu/sanborn-maps 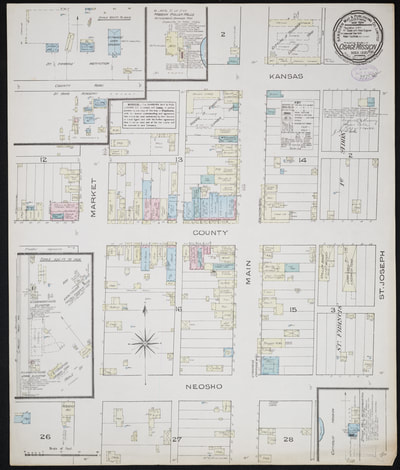 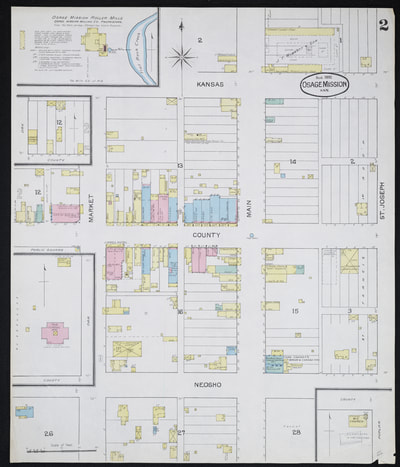 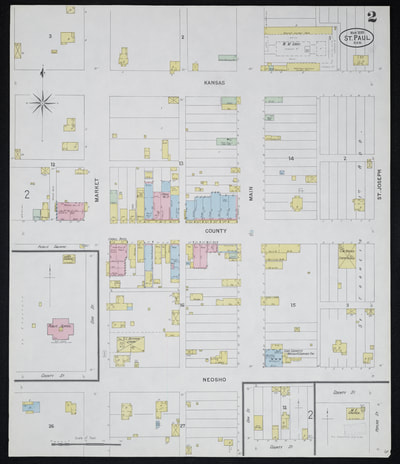 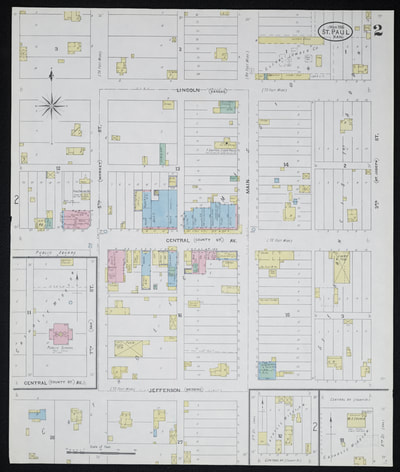