Brother John Sheehan.
Brother Sheehan's strength, ambition and passionate Irish temperament made suited him well for a variety of Mission assignments.
Brother John Sheehan was among the five original Jesuits who arrived in April of 1847.  He was born in Ireland on February 1, 1808 and entered the Society of Jesus on April 25th 1841.

Brother Sheehan was described as a Herculean Hibernian — a Big, Strong Irishman who managed the Mission farm;  but he was assigned many other jobs.  The Indians loved him and generally he was indulgent with them, except when their conduct deserved stern treatment.  At such times a guilty Indian, knowing the Brother's muscular strength, usually kept out of his way.

Brother Sheehan led the life of an active contemplative.  From two until six o'clock every morning he could be found kneeling before the Blessed Sacrament in the little log church.  His hours of prayer were not confined, however, to night watches.  Particularly, during the long monotonous drive to Kansas City to get the usual supply of goods for the Mission did he find opportunities for contemplation.One of these trips in the spring of 1852, he was driving the first of a caravan of five white-topped wagons, each drawn by a double yoke of oxen.   As the wagons bumped slowly along the uneven road, the Brother became absorbed in watching two slender clouds moving across the heavens.   They were shaped like pillars and curved at the top in the manner of a triumphal arch.  From this pondering he was startled by the voice of an Indian boy shouting, "Stop Brother, Stop!"  Bewildered, he looked around and found that the team was pulling only the two front wheels and his seat.  The Indian pointed to a white spot just visible above a hollow in the prairie.  It was the top of his wagon.  Brother Sheehan had been so absorbed in watching the heavens that he had neglected to lock the wheels when coming down the hill; a violent jolt having loosed the king bolt, the heaviest part of the wagon rolled off the road into a hallow.

​​Brother John Sheehan finished his life of missionary service at Osage Mission.  He died on December 13, 1879 and is buried in the Jesuit field of St. Francis Cemetery, St. Paul. 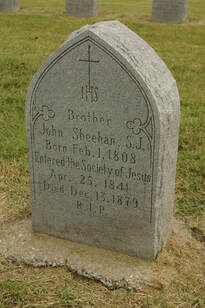 Brother Sheehan's grave in St. Francis Cemetery, St. Paul.
Some Reference Information:
Little is known about Brother Sheehan's life before he arrived at the Mission.  The information above was taken from Beacon on the Plains by Sister Paul Mary Fitzgerald S.C.L., PhD.; Saint Mary College, 1939.  Beacon was Sister Fitzgerald's doctoral thesis when she completed her studies at St. Louis University.  She served on the faculty of St. Mary College, Leavenworth, for 30  years as professor and chairperson of the Department of History; and she was also Vice President of the College from 1949 to 1957.

I personally refer to Beacon on the Plains as Osage Mission 101.  Not only is it a great introduction to the Mission story,  it includes a very large bibliography, detailed index and several appendices.  The book is available from the Osage Mission - Neosho County Museum in St. Paul.  email:  museum@osagemission.org