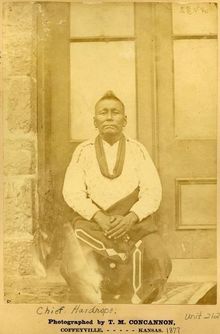 Chief Hardrope
Confederate Officers Massacred on the Verdigris (May, 1863).
By May of 1863 a Little Rock, Arkansas-based Confederate General conceived a plan to draw the western Indians into the Confederate ranks. He recognized the tremendous power the Osages and other plains tribes might bring to their cause. Also, the fifty-mile-wide Osage reserve that stretched across much of the southern border of Kansas could be strategic.  He sent a group of twenty-two officers up the Arkansas and Verdigris Rivers on a secret scouting and recruiting mission. When the group reached the plains, they were to divide up and try to influence various tribes to come to war with the Confederacy.

On the 16th of May the group, led by Confederate officers Colonel Charles Harrison and Colonel Warner Lewis, entered the Kansas Osage reserve near present Coffeyville, Kansas. Whether through arrogance or ignorance they boldly started the trek through the reserve in broad daylight and quickly encountered a group of ten Big Hill Osage who were preparing for the summer buffalo hunt. At the time, Union Major Doudna commanded a post of Federals at Humboldt. The Major had a policy of keeping the Union-friendly Osages familiar with post activity, especially the personnel. The policy paid off because none of the Osages recognized the un-uniformed officers.

After a brief conversation a confederate leader told the Osages everything was fine. When the column of officers started to ride away the Big Hills tried to stop them and an officer pulled his pistol, killed one of the Indians and arrogantly rode away. The remaining members of the hunting party loaded the body of their dead companion onto his horse and returned to their village and asked the village crier to spread the news. Soon, a force of as many as two hundred warriors of the Hard Rope and Little Beaver Bands pursued and overtook the Confederate officers. The Confederates knew their long-range rifles could keep the Osages at bay; but the Indians knew it too and flanked them on each side.  Staying out of range of the big rifles, the warriors could control the Confederates direction. During a tense riding standoff one Osage fell from the fire of a Confederate rifle and two of the officers were knocked from their horses by Osage fire. Finally, the Osages directed the column of officers into a sandbar trap near the mouth of Drum Creek (south of present Independence, Ks) where dense forest hid steep embankments and river rapids blocked escape. The officers expended their ammunition and resorted to out-numbered hand-to-hand combat. When the battle ended the sandbar and surrounding terrain was littered with scalped and beheaded bodies of the Confederates. Other than the two earlier deaths, no more Osages were killed. 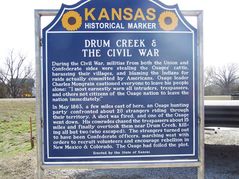 Historical Marker Near the East Edge of Independence, KS. (Click)
​It was only after Hard Rope’s warriors collected and returned several blood-stained documents to Major Doudna that the full extent of the Confederate plan was realized.  The brazen shooting of the hunting party member might have foiled a plan that would have strengthened the Confederate cause and affected the course of the war.

Go Back to:  8.  A Dangerous Balance Balance - The Civil War.
Some Reference Information:
The above was extracted from several sources.  The main research resources were:About two years after we published this website, Professor Isaias McCaffery, PhD, of Independence, Kansas, Community College, published a very detailed paper "We-He-Sa-Ki (Hard Rope): Diplomat, 1821–1883.  This publication became the lead article for the Spring 2018 edition of Kansas History: A Journal of the Central Plains Vol. 41, No. 1, published by Kansas State University and the Kansas State Historical Society.  Professor McCaffery's publication is linked here:  https://www.kshs.org/publicat/history/2018spring_mccaffery.pdf