​5B. The Osage Manual Labor Schools.
“The buildings were not only poorly constructed but inadequate in size.  Before the close of the year 1847, the boys’ school was crowded to its capacity.  In a house built for twenty persons, fifty children were lodged.
Beacon on the Plains, Sister Paul Mary Fitzgerald, 1939
(From Account Book of the Osage Manual Labor School (1848))
The careless work of the government contractors became evident almost immediately.  Instead of mixing suitable mortar to chink logs and build chimneys, they used clay colored with lime.   During the spring rains the material began to deteriorate.  A chimney fell and water began to flow through the walls.  Moisture damage also caused a plaster ceiling to fall in the Sisters quarters. Clapboard was eventually installed over the logs but not before the occupants suffered from the effects of a winter.  Also, the usual outbuildings for a facility of its type, such as a meat-house or barn were initially missing from the grounds.

Another great concern, through the life of the mission, was capacity.  The missionaries saw some initial reluctance to enroll children into the school.  But this was overcome and the schools were soon filled to capacity. Buildings built to accommodate 20 students plus the teaching staff, at times saw as many as thirty-five to forty students.  In addition to young Osage, the mission schools also began to accommodate Quapaw students.  While the larger enrollments did increase the overall government allowance per student, the crowding affected everything including sleeping accommodations, cooking and washing chores, etc.  Yet, everything considered, the young students were generally receptive to education and did quite well.

Some Slow, Steady Growth.
With the crowding described above in mind, Father Schoenmakers made several requests for bigger buildings or additions to existing structures.  The mission eventually grew with the addition of a blacksmith shop and tool-house, a flour mill, bakery laundry and a barn.  Details regarding enlargement of the original manual labor school buildings is sketchy but there were additions.  Descriptions of the boys and girls schools follow. 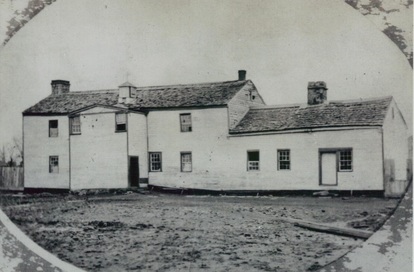 Osage Manual Labor School for Boys (click to enlarge).
​The Osage Manual Labor School for Boys.
The building was originally built in 1846 by government contractors.  It was a two-story building with an initial size of 20’x50’ and was of open-log construction.  After weather-related difficulties, it was enclosed with clapboard.  It is believed that in about 1850 the building was substantially reworked and a one-story addition of about 20’x30’ was added.  It is not clear if the gabled bump on the side of the boy’s school was part of the original structure or an addition.  It is noted that ceiling clearance in some of the buildings was as low as six feet which undoubtedly caused stooping for some of the taller missionaries such as Fr. Schoenmakers. 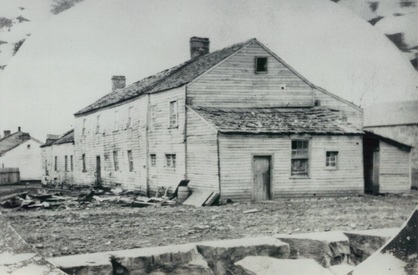 Osage School for Girls (Boy's school in background - click to enlarge).
The Osage School for Girls.
The building was originally built in 1846 by government contractors.  It was a two-story building with an initial size of 25’x50’ and was of open-log construction —later enclosed with clapboard.  This building received at least two, if not three additions but timing is not certain.  One improvement, in 1855, added a single story addition of 20’x22’ to the west end of the building.  Smaller lean-to type of structures were also added to the east and northeast parts of the building.  The photo of the building shown here also shows the boy’s school in the background.
​
In this photo, the Osage Manual Labor School for Boys can be seen in the background.  These two buildings sat end-to-end and probably on an east-west orientation.  The stone in the foreground is a mystery; but might have been related to the church or Jesuit Monastery construction.  Also, the faint image of a structure behind the schools is a mystery.  It might have been the Jesuit residence but it is impossible to say for certain.  More photos would be nice if there are any out there.
The Jesuit Residence.
Other than a very poor photograph (right) and a redrawn version of that photo (left), little is known of this building. The Beechwood drawing shows it as a two-story building north of the log church.  It also shows a side protrusion with a shed-roof which the photos show.  One reference says it was built in 1850.  Some sources have referred to these photos as the boy’s school, but the roofs, chimneys and widows are very different.   The drawn version of the building has a perspective error on the roof that I have “corrected” with a dotted red line.  The written inscription on the photograph says "Indian boys and girls after the vacation of 1867, Osage Mission Kansas."  Some believe the short, robed priest in the center of the photo might be Father Ponziglione.

The drawing or tracing of the Jesuit Residence (left) was done from the yellowed photo on the right. Someone did a pretty good job of laying the foreground scene into the drawing. The perspective of the left end of the roof, in the drawing, is corrected in red (If you squint at the photo you can see it).

A Reminder....
The schools described above started what has become the longest, continuous running school system in Kansas.  As the remainder of this site discusses, it was not just any system.  As the schools evolved and matured during the late 19th century it became one of the most innovative systems in the region.  In today's political environment, our schools could disappear.  A strong community understanding of where we and our schools came from can help us protect them!
​​
Some Reference Information.
​All historic photos were scanned from images on file at the Osage Mission – Neosho County Historical Society.  The background sketch, in the top illustration, was drawn and donated to the historical society by Joe Grillot.

The composite photo of the manual labor school and St. Paul High School was photo edited by R. Brogan.

Information regarding building sizes, additions and student capacity has been extracted during research of several sources including: