​Father Philip Colleton—Refined, Educated and as Tough as Nails.
“If Father Colleton is judged by his labors he certainly deserves a niche in Kansas history.  If he is judged by the spirit which motivated those labors he merits an enviable place in the missionary annals of the Society of Jesus”—Sister Mary Paul Fitzgerald, Beacon on the Plains, 1938 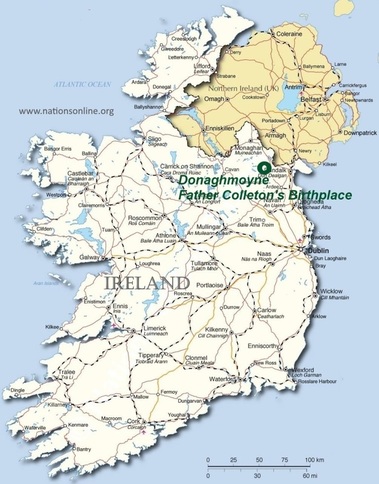 Father Colleton, like many of the Osage Mission missionaries, was an immigrant.
These words of Sister Fitzgerald, from her book about the Mission, seem like an understatement.  Of all of the characters from the Catholic Osage Mission, Fathers Paul Ponziglione and Philip Colleton were the most prolific trail-riding missionaries, in terms of mission stations.  Father Ponziglione is credited with more stations, but he was here longer; and much of Father Paul's work is documented in his voluminous journals and reports.  Father Philip Colleton didn't write as much, but he seems to have left visible historical tracks at places around the state. For example, the composite photo above shows two images.  On the left is a large mural in Sacred Heart Catholic Church in Larned, Kansas.  It depicts religious figures who led Catholicism into the Central Kansas-Pawnee County area.  On the right is the historical marker sign at Greenbush, Kansas.

What do the images have in common?
The header picture serves to illustrate three important things about Father Colleton’s work:
​Philip Colleton was born in Donaghmoyne, County Monghan, Ireland in 1821.  At the age of 33 he was ordained a Jesuit priest. After traveling to the United States, he served as a scholastic, stationed first at St. Joseph’s College in Bardstown, Kentucky and then he served at St. Louis University.  He was later sent to St. Mary’s Kansas to teach and serve as a missionary.  In his final assignment he arrived at Osage Mission in 1867 to work under Father Schoenmakers. 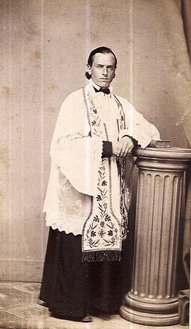 Father Philip Colleton
At Osage Mission Father Colleton assisted with design and construction of one of the first public school buildings, St. Francis Hall.  In addition to being used as a school, it was also one of Kansas’ first lending libraries.  Thanks to Father Philip’s ingenuity, and some wheeling-and-dealing skills, he was able to stock the library with a collection of religious books and pamphlets.  He also devised a system to distribute material to Catholics across our region.  Between 1868 and 1870 he also started nine small, unpretentious churches across southeast Kansas.  Many eventually grew into present-day parishes but some did not survive:  Baxter Springs, Scammonville (Scammon), Chetopa, Parsons, Ladore (abandoned), Hickory Creek (Greenbush), Thayer, Parker (Montgomery County, abandoned), Coffeyville.  He also assisted with starting schools in some area communities.  It was his encounter with a thunderstorm near Greenbush that led to the “Legend of Greenbush” historical story based on a book written by W.W. Graves.

​His missionary work seems boundless.  He is credited with establishing at least thirty-three mission stations in Kansas, Missouri and Arkansas.  He also traveled as far west as Pueblo, Colorado, to serve railroad workers but there are no named stations in that state.   He seemed to favor soldiers, railroad workers and miners as those he could help the most.  According to Fitzgerald “It was not the wickedness of these men that surprised Father Colleton, but rather that they could be as good as they were considering the conditions under which they lived.”   These were men who had abandoned their faith to a life of misery and drunkenness; but could be brought back from the brink of ruin with his firm counseling and a bit of Irish humor.  In working with these men he was subjected to the same rough, dirty and brutal living conditions that they endured. 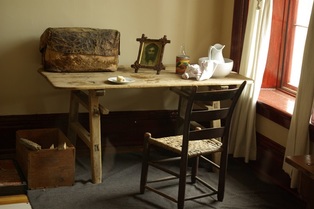 Osage Mission Trail Rider Display at Fort Larned National Historic Site
​If you drive to the Fort Larned National Historical Site, about six miles west of Larned, you can find another sign of his work.   Several years ago the Chief Ranger-Historian at the site told us that the fort had a politically-appointed chaplain.  Unfortunately, he was a Presbyterian minister and most of the soldiers were Irish or German Catholic immigrants.  Jesuits from Osage Mission traveled to the fort from time-to-time to say Mass, hear confessions and counsel the soldiers.  The fort has set aside one room in the officer’s quarters to replicate the “Trail Riders Room” that was used by Father Colleton, who is credited with founding missions at Fort Larned and Dodge City in 1869.

Much of Father Colleton’s and Ponziglione’s work was done from horseback.  But during the late 1860’s and 1870’s the new railroads extended their range.  The railroads allowed them to travel in relative comfort to western locations like Fort Larned and Dodge City, Kansas and Pueblo, Colorado; and into Arkansas.  But the railroads were not perfected and presented their own dangers.  In the winter of 1873 Father Colleton was involved in a fiery head-on collision of two trains between Dodge City and Fort Larned that took the lives of two train crewmen.  A year earlier he nearly drowned when a construction train derailed in central Arkansas.  (See “The Missionary Trails” and "Missions—Mission Stations—Churches.")
​
Having survived two serious railroad accidents, the circumstances of his death seem cruelly ironic.  On Sunday, February 16th, 1876, he was traveling on a railroad handcar near Ladore, Kansas.  The hand-bar used to propel the car struck him in the chest throwing him backward into a tool box.  He was knocked senseless and remained in very serious condition for several days.  He was eventually returned to Osage Mission where he remained in serious condition.  After a time, he seemed to recover and was able to re-assume some of his work.  Then, on December 1, 1876 he died suddenly from the effects of a hemorrhage.  Father Colleton is buried in the Jesuit field of St. Francis Cemetery at St. Paul.
​​Go back to Characters - or - go to Story
Some Reference Information:
Much of biographical data and information about his missionary work came from three sources:Illustrations: