17 Sisters II - Rev. Fox's Address
In July of 2017 we published an article about the historic reinterment of 17 pioneer Sisters of Loretto at St. Francis Catholic Church, St. Paul, Kansas.  The article mentioned an eloquent sermon delivered by Rev. John Fox C.P. during that service.  We recently received a copy of that address and it is shown here. 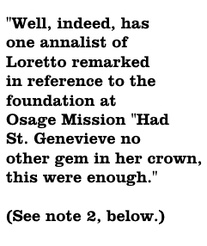 The original article described the Loretto reinterment services which occurred here on September 15, 1930.  In the description it speaks of an address delivered by Rev. John Fox C.P. — "beautiful in text and delivered with the inspiration of the moment."   The theme of Reverend Fox's sermon was 'the time for mourning the seventeen women was long past.  It was time to celebrate the remarkable lives the pioneer Lorettos had lived.'

Early this autumn (2018) we received a bag full of old documents, books and other items from a cousin, Karen Hopkins Steinbacher [1].   In the bag was a plastic sleeve containing a small booklet and two photographs.  One of the photos is of Father Fox. [3]    The booklet is ribbon bound with lavender colored paper covers and an embossed St. Francis Church stamp in the lower right corner of the front cover.   The interior pages are heavy tissue of the type once used for typewriter carbon copies and they bear the indentures of a typewriter original.

The first typewritten page says "Memorial Address ... at .... Translation Services of the Remains of Seventeen Sisters of Loretto Held at St. Paul, Kansas on Sept. 15, 1930.   J. M. Fox  C. P."  Wow!  What a coincidence after having just published the story of this beautiful event.  I can only wonder if the booklet was Fr. Fox's original or a copy, but I suspect there were not many like it.  There is a pen-and-ink correction on one page (PDF page 8, below).  Also, printing services were readily available to the church.  W.W. Graves, a publisher and St. Francis parishioner, did several printing jobs for the church.
Photo Slideshow.
The booklet cover is a little tattered around the edges, but the pages are in very good condition. The booklet was not disassembled for scanning because the ribbon binding would have likely been destroyed.
Some Notes and Background Information:
This page started as a follow up to the original 17 Sisters article, but ended up being much more.

1.  Karen Hopkins Steinbacher has more than passing interest in this story and our history.  Father John Fox Married her parents, in St. Francis Church, on October 15, 1929 and he was a close friend of the Hopkins family.

Also, Karen was a great niece of historian-publisher William Whites Graves.  Her great aunt, Emma Hopkins, married W. W. Graves on May 1, 1895 when both were employed by the Girard World Newspaper.  Later, her grandfather, A.J. Hopkins, was a partner in Graves' Journal Publishing business and in an early enterprise that built as many as three theaters in St. Paul.  A.J. also became active in the Anti-Horse Thief Association and assumed much of the work related to publishing and distributing the A.H.T.A. Weekly newspaper; and publications like the Kansas Knights of Columbus magazine.  In later years, Karen's father, Fielding "Hoppy" Hopkins, also joined Graves in business ventures including the publishing company and an insurance business.  When W.W.'s health failed, Hoppy spent countless hours keeping the St. Paul Journal going until Mr. Graves sold it in 1951.

Hoppy Hopkins played an important role in the last days of the Loretto presence in St. Paul.  In the spring of 1963, he completed the sale of several hundred acres of land south and east of St. Paul for the Loretto Motherhouse in Kentucky.  The contract price was $35,101.65.  Documents related to that sale are included with many other family and community items that were donated to the local museum by Karen.  They are archived as the "Graves - Hopkins Collection."

2.  St. Genevieve.  First, I want to say "Thank You" to Sister Eleanor Craig for helping with this page.   Sister Craig is the archivist at the Loretto Motherhouse Heritage Center in Nerinx, Kentucky.  Some will remember that she and two other Loretto representatives visited us last December (2017).  She assisted with the reference to St. Genevieve, above, and clarified some facts that will change at least a couple of pages on this site.

"St. Genevieve", in the sidebar quote above, refers to the Loretto convent and girl's boarding school at St. Genevieve, Missouri.  It was also the original home of some of our missionary Lorettos.   Father Fox's comment suggests that the Girl's schools at Osage Mission was a crown jewel among the Loretto's schools — one of their proudest accomplishments.  Sister Craig believes this is true and has said that Osage Mission is one of her favorite missions.

​My conversation with Sister Craig provided quite a few details regarding the Loretto's assignment to Osage Mission that I was unaware of.  These included the initial meeting place between the Loretto's and Fr. Schoenmakers was likely St. Genevieve, not Nerinx; the routes between Nerinx and St. Louis were likely via the Ohio and Mississippi Rivers, not overland; and most surprising is the fact that Sister Bridget Hayden was the superior of St. Genevieve prior to her departure for Osage Mission.  When she received her assignment to come to the prairie, she served Mother Concordia Henning (before becoming superior herself).  She left a comfortable administrative position at an established facility to help start an Indian school thirty miles west of the Missouri border with no-man's-land.  That says a lot about her, and her companions, character.  Mother Bridget's information will be updated as information is gathered.

3.  The Photo.  There were two photos in the sleeve with the booklet.  Both of priests standing in front of the Passionist Monastery in St. Paul.  Based on comparison with the photo of Fr. Fox in the September 18, 1930, issue of the St. Paul Journal there is little doubt that the photo in the slideshow is him.