5C. A Beacon on the Plains …..
“ … is a nickname our existing, majestic stone church has assumed over the years.  But the term “beacon” was coined by Sister Mary Paul Fitzgerald in her book “Beacon on the Plains.”  The book deals with the Catholic Osage Mission and its humble log church that predates the stone church by thirty-five years.  In her book Sister Fitzgerald wrote:  “In the fifties, the mission was something of a beacon light to the few scouts, weary teamsters or perplexed travelers who stopped for rest, refreshment and supplies for which they customarily paid nothing.  Not infrequently the missionaries rescued individuals lost on the plains …”  The image of the old log church also carries another important designation.... 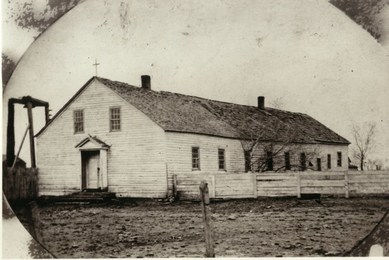 The original St. Francis de Heironymo Catholic Church
The Cradle of Catholicism in Southeast Kansas.
As described elsewhere in this site, the Catholic Mission served two important purposes:  1) Providing education for Indian children and  2) Serving as the Jesuits headquarters for widespread missionary activity south of the Santa Fe Trail. This missionary range spanned several states and well over 150 locations.  See the Missionary Trails link for more information.   This work led to the image of the old church as being an icon for the spread of Catholicism in southern Kansas.

The government contract for construction of the mission buildings did not include a church.  That was left for the Jesuits.  For several months Masses were said in the school or residence buildings.  Then in late 1847 or early '48 Father Schoenmakers erected one of the earliest churches in Kansas — the first St. Frances de Heironymo Catholic Church. [1] This simple structure would grow, and stand for about forty years.
Size and Position.
Some of the older area locals grew up thinking of the old church as a quaint, small building.  That belief might have been fueled by a small 'replica' that sat by the roadside park, across from the existing church, until about 1960.  In actuality the final church building had 2,700 to 3,000 square feet of floor space and a roof-ridge that was 16 to 18 feet above grade.  The “little church” was a pretty good sized building.

The initial footprint of the building was about 30’x30’, but some accounts say it was as large as 35’ square. In 1858 a thirty foot log extension was added. In 1861 a second thirty foot addition was built, extending the overall length to 90 feet. This last addition was of frame construction and the entire building was covered with clapboard to make it more weather tight. Close examination of the photo above clearly shows variation in the roof shingles for each section of the structure (click on the image above). The final church sat at a 13 degree angle from south to northeast; and the timber-frame tower near the southwest corner contained what was probably the first church bell in Kansas. 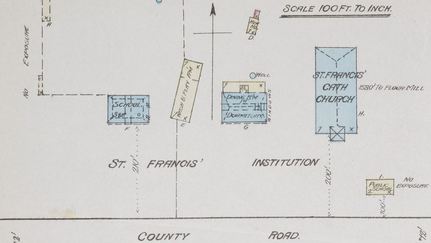 The south end of the church was near the existing rectory driveway (click to enlarge).
How Do We Know Where it Was?
The log church is the only original mission structure that was mapped.  A cutout from an 1885 Sanborn Fire Insurance map shows the building about 215 feet west of the existing church where it sat at a 13 degree angle from south to northeast.  As luck has it, this map was drawn during a brief period between the 1884 dedication of the “new” church; and when the old church was razed in 1888.  In the interim period between ’84 and ’88 the church was re-purposed as a wash room recreation area for the students of St. Francis Institution.  It was the last of the original mission buildings to be torn down.
​
To further visualize the location of the church, I overlaid a Google Earth satellite image of the current church and rectory grounds onto the 1885 Sanborn Map.  This illustration shows the southeast corner of the church in the garden area between the rectory driveways.  The mapped buildings on either side of the church are the first monastery on the grounds—the Jesuit Monastery (east) and the St. Francis Academy building (west).

Satellite Image Overlay
Some Reference Information:
Note 1 from above:  Father Schoenmakers directed construction of the church and its two additions.  The actual construction work was done by the Jesuit brothers.