The Missionaries
Let's open with a bold statement.  The Jesuit and Loretto Missionaries who arrived at the Mission in 1847, and those who followed, were among the most remarkable people that ever set foot on Kansas soil.  Unfortunately, they have but been all but forgotten—even here at home.

The comment above is very similar to words written for Mother Bridget Hayden in her obituary in the February 6, 1890 issue of the Neosho County Journal.   To better understand the challenges the initial group of missionaries faced, consider another thought:

Most were immigrants... Nearly all of the Osage Mission's Jesuits and many of the Loretto Sisters had recently arrived from far points of Europe.  As they passed among the Indians and the settlers they taught, they established mission stations, they built churches and schools—and they sprinkled elements of their diverse cultures behind them.

They did not arrive at the Mission as the seasoned, hardened frontiersmen and women we see in movies and television shows.  Most were were refined, very well educated and dedicated to the Indian mission ministry — many were teachers.  At least one had spent time in the military of the home land and their backgrounds were as varied as anyone can imagine. Father Paul Ponziglione was born to Italian royalty and had received the education of a nobleman.  Father John Schoenmakers’ upbringing was so humble that little is known of his younger days.  The others fit somewhere between.

They might not have arrived tough, but their remote prairie assignment tested them and toughened them.  They dealt with harsh elements and inadequate housing, the unpredictable Osage temperament, war, famine, disease and the effects of isolation.  At least two of them died young.

We have started with brief biographic articles on six of the missionaries and hope to build from there later.   ​           - Father Schoenmakers' Windows — Two stained glass windows dedicated to his memory. ​           - Father John Bax II — A detailed research paper and location information by a family member. I should note that these six, while better known than others, should not be considered as “special”.  All of them were special.   The next time you walk through the Jesuit and Loretto fields of the St. Francis cemetery, remember that the small, granite tombstones are monuments to people--truly remarkable people. 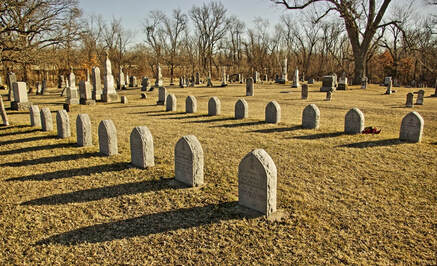 Some Reference Information:
1. The banner photo at the top of the page shows the Jesuit missionary field at St. Francis Catholic Cemetery, just east of St. Paul, Kansas.   About 100 yards northeast of the Jesuit area, surrounding a large round cedar bush, is the Loretto field.

​All of the graves in the Jesuit area are those of the Jesuit missionaries that served the Catholic Osage Mission and the early town of Osage Mission.  This is also true of most of the graves in the Loretto field; but there are some more recent graves.  Seventeen of the Loretto graves were relocated to St. Francis Cemetery in 1930, from a small cemetery at the St. Ann's Academy site, across the highway from St. Francis Catholic Church.

Also, north of the Jesuit field, near the north edge of the cemetery, is the Osage gravesite.  That site contains the remains of several Osages that were previously buried in an early cemetery that was once near the center of present-day St. Paul.  St. Francis also includes graves of several Civil War soldiers and the earliest settlers of Neosho County.   A mile north, the gravestones of Hope Protestant Cemetery represent many stories of Frontier Kansas, and of a doctor that treated President Lincoln after he was shot.

These two cemeteries are likely among the most remarkable burial spots in Kansas and the four-state region. 2 Photo by Ron Brogan.