The St. Paul Middle School Building.
The Middle School building in St. Paul was finished and dedicated in 1923.  But the building contains a large amount of native sandstone that was originally used in a  frontier boarding college fifty years earlier.  That sandstone is an important visual link to the longest, continuous educational heritage in Kansas.
​A friend gave us the photo used in the page banner a couple of weeks ago.  It was probably taken between 1912 and 1921. It depicts three buildings that existed, in the configuration shown, for about nine years:

1) St. Francis Catholic Church, on the right was dedicated in 1884 and is the only building that remains.

2) The Passionist Monastery, at the center, was built in 1912.  It remained, attached to the church, until it was razed in 1985.  The last Passionist priest left St. Paul two years later.

3) The building on the left was finished by the Jesuits in 1873.  St. Francis institution for Boys was a boarding college that provided a two-year finishing education with an emphasis on business.  The Institution closed in 1892 when the Jesuits left, and the building was used as a public school until it was heavily damaged by a fire in August of 1921.  Using existing landmarks, the St. Francis Institution building sat just west of the existing rectory driveway, between the rectory and the present schools campus.  Follow THIS LINK for more information about St. Francis Institution. 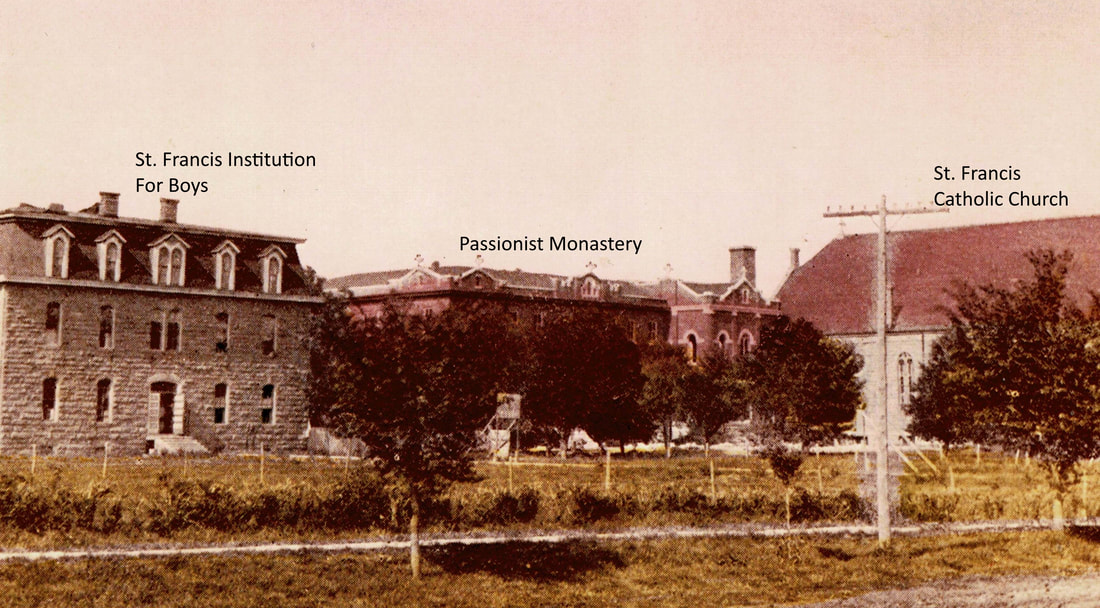 ​The scene depicted in the photo only existed from about 1912 until 1921.   But remnants of the original college building remain a few hundred feet west of the original boarding college building.
The Fire.
The St. Francis fire was discovered around noon on Saturday, August 6, 1921.  According to the St. Paul Journal article of August 11, lightning was a suspected cause.  The fire was difficult to fight because it started between the metal roof and third-floor ceilings.   But it eventually spread and gutted the three-story stone and frame building.  The fact that the fire never progressed to all-out inferno proportions reduced damage to the thick, stone walls of the lower two floors.
Rebuild?
There was little doubt that the school would be replaced.  Even the above-mentioned news article, written only days after the fire, reported:

“Rev. Father David says he can’t say definitely what will be done until he consults the bishop and provincial, but he believes it will be rebuilt soon as a two-story building and again be used as a school.”
​
Until the school was replaced, a frame College Hall building [1] would be used for school purposes.
A Rather Unusual Project Gets Under Way.
Like most large building projects the new school required time and a fair amount of compromise.  As time went on it became clear that the College Hall building was going to be inadequate as a long-term school solution.  A February 9, 1922, Journal article confirmed that the school would be moved farther away from the Passionist Monastery, possibly on a corner west of the original location. [2]  At the time there was discussion regarding another rural school project and how it might impact the new St. Francis.  Also, at that time, the Passionists volunteered to donate all of the stone from the original St. Francis Institution building.

One very interesting aspect of the project plan was funding.  In spite of the fact that the new school would be a “district” or public school; “The parish is to purchase a site and erect the building purely as a parish proposition, and will give the district free use of it indefinitely.”  The parish donated the new school to the community.

Over the next few months, there were several meetings.  Money was pledged but there were a few detractors dubbed as “kickers.”  But a May 11, 1922, Journal article noted that   “… they were soon made ashamed of themselves by the liberality of others.   Every wage owner in the parish will be asked to contribute something toward building the school …”

By June of 1922, a crew of men began tearing down the walls of the old college building so the stone could be reused.  Also, an architect identified as Mr. Madori arrived from Kansas City, with building plans, so work could begin immediately.  It was decided that the main part of the work would not be let to contractors.  It would be done under the supervision of local men and the architect, with the use of local labor.  It had also been previously decided that the building would be a fire-resistant structure with maximum use of concrete, brick and stone materials.
​
Work did begin immediately.  The June 22, 1922 issue of the Journal reported that ten teams of horses were excavating the basement and that work would be completed that week.
Completed!
Nearly three columns on the front page of the January 25, 1923, St. Paul Journal were dedicated to the long-awaited school dedication that had occurred the day before.

“Wednesday, January 24, will go down in history as one of the big days in St. Francis Parish.  It being the occasion of the dedication of the new St. Francis school building by Rt. Rev. Bishop August J. Schwertner of Wichita.”

The article [3] goes on to describe a Solemn High Mass at 9:00 that morning including an appropriate sermon and Solemn Benediction.  After church services, a procession formed and all marched to the new school where several hundred people attended a dedication ceremony and an elaborate banquet.  The banquet, with piano and vocal performances, also included several visiting clergy and out of town visitors.

In the end, the new building was quite a bit larger and more elaborate than originally visualized.  The structure was 131 feet long by 65 feet wide, with the first story one half above grade and a second story above that. The original cost was about $41,000.  In later years an addition to the north side would add space for kitchen, locker rooms and heating equipment.  We are fortunate that our predecessors had the forethought to build a structure that remains pretty flexible today.

OH!  And one of the unusual and attractive architectural features is the four courses of native sandstone that was used between the grade-line and upper brick.  Those four rows of stone are a visual direct link to a proud educational heritage that dates back to 1847. 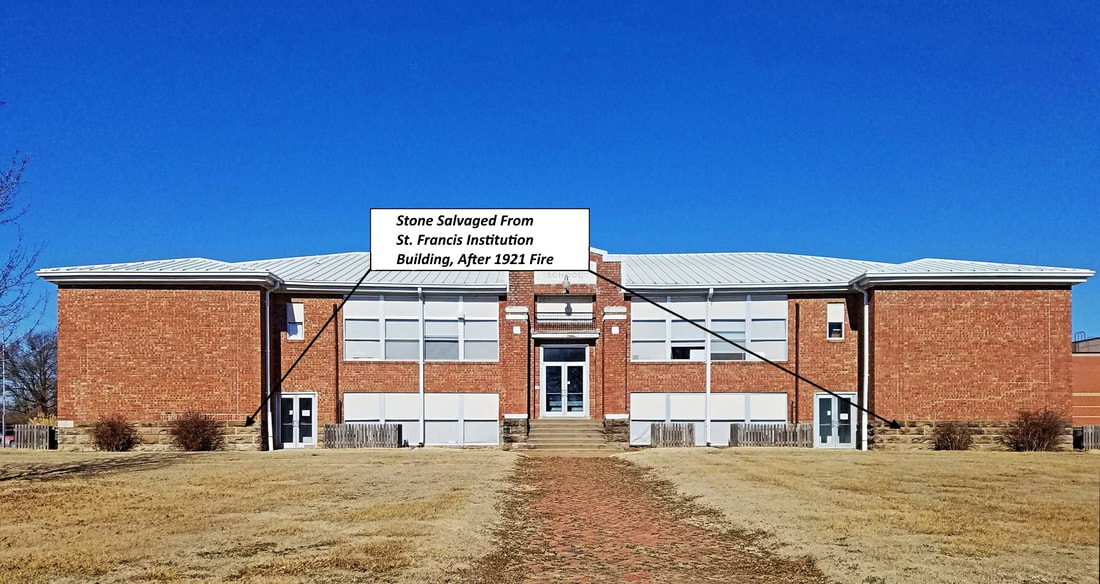 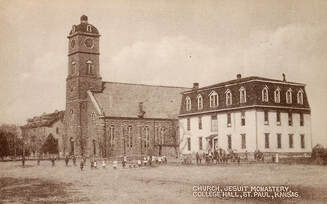 College Hall Building After it Was Moved to East of the Church
Some Reference Information:
1.  The College Hall was a three story frame building that was part of the St. Francis Institution campus.  It originally sat east of the existing school playground.  In about 1912 it was jacked up and moved to a location just east of St. Francis Catholic Church.  In earlier days, in that position, it served as a public school building.  After completion of the new school it eventually became the Saint Francis Parish Hall.   But to locals, it never shed it's original name "College Hall."  After the present St. Francis Parish Hall was dedicated in May of 1960, the College Hall building was razed. 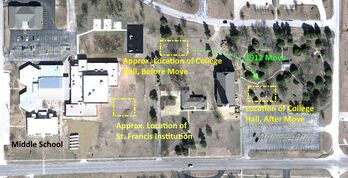 Click to Enlarge.
2. Positions.  This figure uses a recent satellite image to illustrate the locations of the St. Francis Institution and the College Hall buildings, relative to the existing church and Middle School Buildings.  The College Hall is shown in its original position; and the location after it's 1912 relocation.  Locations are approximate and are not to scale.  (Click to enlarge.)
3.  Newspaper Articles.  If you are interested in following some of the progress from the time of the St. Francis fire through dedication of the “new” building, follow the newspaper links below.  The links take you to articles in PDF format*.  These newspaper articles were downloaded from Newspapers.com via the Kansas State Historical Society website.  Newspapers prior to 1923 may be downloaded, free of charge, by Kansas residents with a current Kansas drivers license.    https://www.kshs.org/ancestry/drivers/dlverify

Download File
*Note:  Your device must be equipped with Adobe Reader or compatible software to complete downloads.