33rd Annual Meeting of the Anti-Horse Thief Association of Kansas — Chanute, October 20 - 21 - 22, 1915
The photo caption is self explanatory.  But the group itself has faded from memory during the past eighty years or so.  The term Anti Horse Thief Association — A.H.T.A. — brings up visions of angry vigilantes lynching horse thieves from trees, or ranch gate crossbars.  But they were not vigilantes and an examination of the photo (click to enlarge) reveals they were a pretty respectable looking lot.   A closer look also reveals at least thirty-seven women among about 440 people. [1]
In reality the A.H.T.A. was a very well respected citizens law enforcement group.  The organization was formed in northeast Missouri during a lawless period just prior to the Civil War.  The loss of horses, other livestock and farm equipment were not covered by insurance.  Worse, law enforcement was so thinly dispersed, thieves could flee across the Mississippi or Illinois Rivers and out of the Missouri jurisdiction.   The group got it's initial start in 1854 but the outbreak of the war put it on hold for a while.
By the end of the 19th century, the A.H.T.A. and similar organizations operated in Kansas, Missouri, Arkansas and Oklahoma.  In 1899 a Neosho County businessman, Fielding Scott, was elected as vice-president of the national order of the Association.  In 1900 he was elected to the first of four terms as president.  During his time, he and a group of Neosho and Labette County men reorganized the group and consolidated it with some of the other vigilance groups.  Part of the plan was to institute a national weekly newspaper that would keep a growing organization informed.  That was when a young, budding journalist, W.W. Graves, entered the picture. 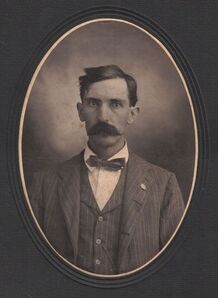 W.W. Graves in His Younger Days
I have looked at most of the mustached gentlemen in the photo for Mr. Graves.  I know he is there because after he replaced Scott as the local leader of the Association, he claimed he never missed an national convention.  There is little doubt he made it to Chanute.  Under Graves' guidance, and with the support of his St. Paul, Journal Publishing company, the Association grew and became a legendary volunteer detectives organization.  It has been said they were more effective than the Brinks Agency and for good reason — Brinks worked for money and Association members worked for one another.  it was lightly boasted that if you wronged a member, the others would chase you to the gates of Hell, and then go on in!  The photo of Graves shown here is probably from about the time he became a part of the A.H.T.A..  Note that he, like many in the group photo, looks pretty serious.  They were serious.  Like modern lawmen, the Association members dealt with the rougher side of life but they were unpaid.   [2] [3]
Some Reference Information:
1.  Don't try to count them.  It will hurt your eyes an you will likely miss some of those half-heads hiding behind someone else.  I actually came up with about 437 and I'm probably wrong.  Can you imagine the photographer, with an early, tripod-mounted plate or folding "pocket" camera trying to get them to hold still and look stern.
2.  For more information about the A.H.T.A., including its Missouri founding, the early 20th century southeast Kansas influence, and its eventual fade, follow THIS LINK.
3.  For more information about William Whites Graves, follow THIS LINK.
4. The photos above are on file at the Osage Mission - Neosho County Museum in St. Paul, Ks.  "Click to enlarge" can be a fickle request depending on device or monitor.  If you would like to download a copy you can do it HERE.
Note that this is a 9MB JPG file that has been downsized from the museum's 126MB TIFF original.  It will take a moment to download.