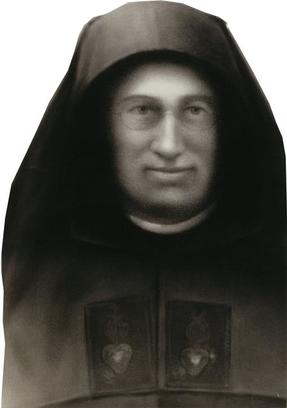 Mother Bridget Hayden
Of all of the Sisters of Loretto who served the Mission Mother Bridget Hayden was the best known. Her name remained a household word throughout the region well into the middle 1900's.   The settlers of the area regarded her, matter-of-factually, as a saint (See note in reference section below).

Margaret Hayden was born in Kilkenny, Ireland on August 14, 1814.  In about 1818 her grandfather Hayden immigrated to the United States.  After landing in New York he traveled to The Barrens in Missouri, now called Perryville.  In 1820 Margaret, her parents Thomas and Bridget Hart Hayden and seven siblings followed suit and also settled in Perryville where her father was a wheelwright.  It was there that she grew to womanhood.
​
In 1841 Margaret received the habit of the Sisters of Loretto at Cape Girardeau, Missouri and was given the name Sister Bridget Hayden.  Five years later she was stationed at the Loretto Motherhouse in Nerinx, Kentucky when a tired and discouraged Jesuit priest arrived from Kansas.  The priest, who looked more like a weather-beaten tramp than a missionary, had already spent time in St. Louis trying to recruit religious women for his Osage Indian girl’s school.   No one was interested.  In addressing the Lorettos, Father John Schoenmakers laid his situation out bluntly. The living conditions at his mission were stark and primitive, nothing like the comforts of the Kentucky Motherhouse.  His students were eager to learn but the adult Osage were savage by current definitions; and had very different religious beliefs.  He painted verbal pictures of the beautiful prairie sunsets; but also told them of brutal winters, droughts and isolation from other white people, medical aid and the security of civilization. 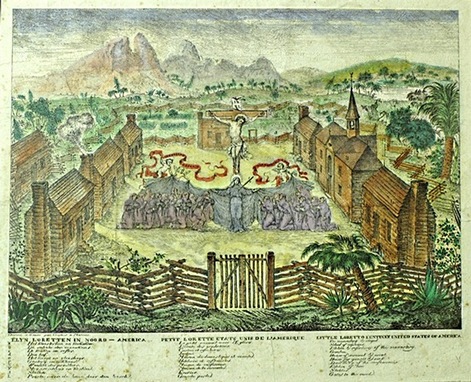 Stylized Drawing of Loretto Motherhouse in Nerinx, Kentucky at the time the Lorettos left for Kansas (1847 - source below)
​When Father Schoenmakers left Nerinx he was accompanied by four Sisters of Loretto:  Mother Concordia Henning, Sister Mary Petronella VanPrather, Sister Vincentia McCool and Sister Bridget Hayden.  They traveled to St. Louis by wagon where they spent a couple of weeks making preparations for the remainder of the journey.  Then on September 20 of 1847 they boarded a Missouri River steamer J. J. Harden for Westport, MO (now Kansas City).    After a brief stop in Westport, Father Schoenmakers and the four Sisters were joined by a guide and mounted two covered wagons for the trip to Osage Mission.  On October 10, 1847 the wagons reached the Mission and the Osage School for Girls opened that day. 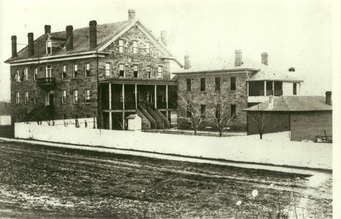 St. Ann's Academy
​In 1859 Sister Bridget Hayden succeeded Mother Concordia as superior of the female department of the Osage Manual Labor School.  She served as Mother Superior of the school during the early stages of the Civil War when the Mission was frequented by both Union and Confederate soldiers —sometimes on the same day.  She and the Sisters did their best of feed the soldiers; dress injuries or do whatever was possible with scarce supplies.

In 1863 a situation arose at St. Vincent’s Academy in Cape Girardeau that called for the skill of a diplomat.  Mother Bridget was sent to the Academy where she assumed the role of Mother Superior.  The troubles at Cape Girardeau were different than those at the mission but no less harrowing.   In addition to the tensions of the war, the Lorettos faced severe prejudice at the hands of a local Presbyterian preacher.   Also, in 1865 the state of Missouri passed a law forbidding any person to teach or preach who had not taken an oath to support the Union.  Mother Bridget, under the direction of the Archbishop of St. Louis, refused the oath.  She and others spent three years on the verge of arrest and in constant legal battles with local judges.  To repeat that her time at the Cape was harrowing is an understatement.

In 1866 or 1867 (actual date unknown) Mother Hayden returned to Kansas to resume leadership of her school.  The initial period of her return was also difficult as she witnessed the departure of her beloved Osage girls.  Treaties were being signed, the Osage would be departing for Oklahoma and the Jesuits and Lorettos were preparing to shift gears in preparation for the multitude of settlers from the east.

By 1870, the joint operations of the Manual Labor Schools were dissolved and a public school system had been started.  Then, in May and September of 1870, respectively, charters for the incorporation of St. Francis Institute and St. Ann’s Academy were filed.  Father Schoenmakers served as superior of the boy’s school and Mother Bridget assumed control of the girl's Academy.  In October of that year Fr. Schoenmakers deeded 100 acres of land and equipment to St. Ann’s. 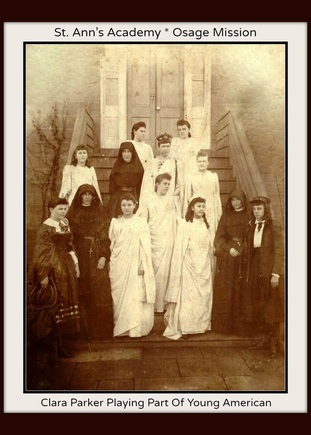 Young Clara Parker participating in one of St. Ann's programs (Far right, front)
Under Mother Bridget's guidance, stone buildings were built and St. Ann’s began its rise as a prestigious frontier women’s boarding school.  In addition to a standard curriculum, her schools excelled in the areas of art and music.   St. Ann's Academy continued to prosper through her rein which ended in January of 1890 when Mother Hayden passed as the result of a brief bout with Influenza.

But even in death she remained remarkable. Mother Bridget and 16 other Sisters were buried in a convent cemetery near the Academy. In 1930 the cemetery was lacking attention and the bodies were moved to St. Francis Cemetery.  The remains in sixteen of the old coffins were so deteriorated that they were placed in new baby coffins.   Sister Bridget's body was placed in an adult coffin because her skeletal remains were in extraordinary condition and her habit was completely preserved!  While this seemed remarkable to the people who exhumed her, the local settlers seemed unimpressed.  They shrugged and said “see—we told you she was a saint!” ​ 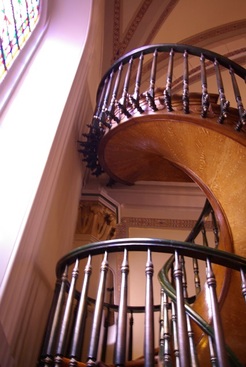 Loretto Chapel Staircase, Santa Fe, New Mexico (photo - R. Brogan)
A Side Note—Three Sister Hayden's.
Sister Bridget was one of three Hayden Loretto “Sisters”.   One of her sisters, Mother Elizabeth Hayden, served as the superior-general of the Loretto Order from 1870 to 1876.  Her duties included direction of the Loretto missionary activities across the United States.  Her family name was Mary Anne Hayden.

Joanna Hayden took on the name of Sister Magdalen Hayden when she took her vows to the Loretto Order in 1834. After spending time in Loretto, KY, Cape Girardeau and Bethlehem, MO she entered the western missions.  In 1852 Sister Magdalen and a group of Loretto Sisters left the Kentucky Mother house for Santa Fe.  In route, the mother superior of the group died of cholera in Independence MO.  Sister Magdalene became Mother Magdalene.  Mother Magdalene’s time in Santa Fe is well documented as the founder of several Catholic schools and the Superior of the Our Lady of Light Academy in Santa Fe, also known as the Loretto Academy.  The Loretto Academy in Santa Fe is very well known for the spiral staircase built during her time.
​A few years ago Rosie and I had the opportunity to spend a little time with Sister Eleanor Craig, the archivist at the museum of the Loretto Motherhouse in Nerinx Kentucky.  Sister Craig told us a couple of things that left an imprint on our minds, and hearts.
​When you stop to think about it, the Hayden Sisters had a pretty profound impact on the American frontier!
Go back to Characters - or - go to Story
Some Reference Information: 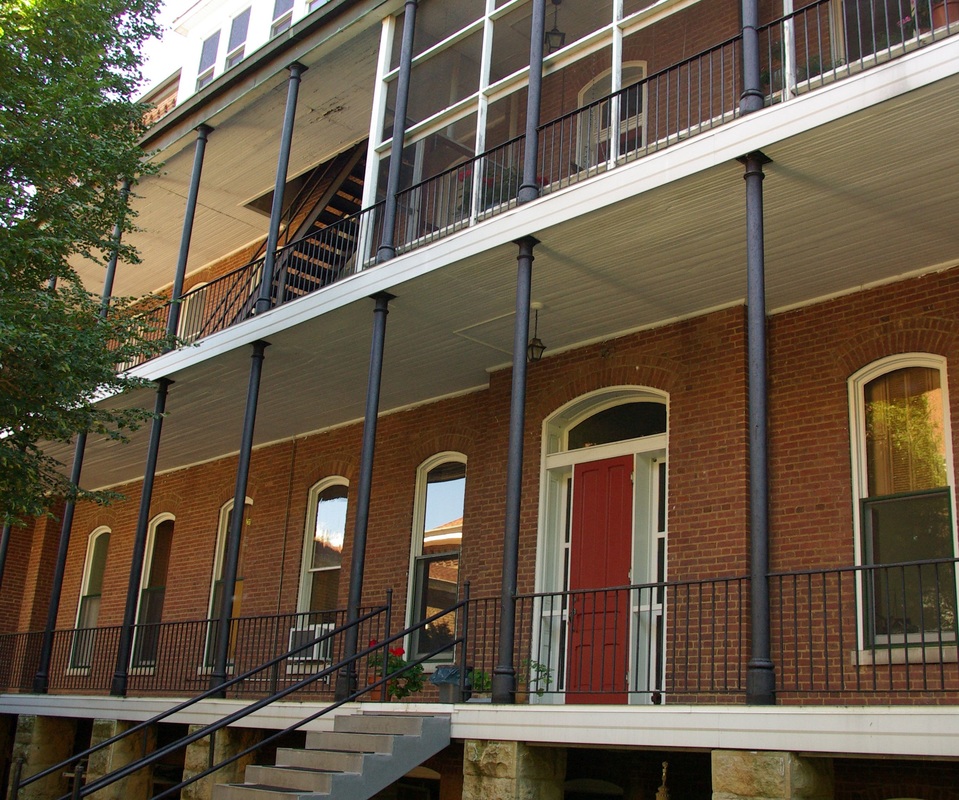 Modern photograph of the Loretto Motherhouse at Nerinx, Kentucky. If you travel to the Bardstown area, it is well worth a visit. (photo R. Brogan, 2013)