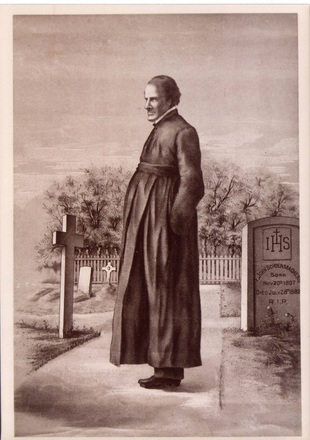 Father Schoenmakers did not live to see his church completed.
In 1871 the new town of Osage Mission was in the midst of a building boom.  Homes and businesses were springing up as fast as builders could build.  Just east of the city limits, construction of large, elaborate schools and a Jesuit Monastery enlisted services of specialized builders, masons and craftsmen to erect and finish the finely detailed structures.  It was then that Father John Schoenmakers laid out his plan to build a new, stone church.  He believed the explosive settlement in the area, plus the new schools, would soon overgrow the capacity of the log church.  He envisioned a grey sandstone structure with a majestic steeple that would be erected just east of the existing church and Jesuit Monastery.  (See Note 1, below.)

When the parish approved construction of the new church in June of 1871, they were confident it would be completed in little more than one year.  An architect named William Murphy completed plans for the church in early October, and foundation excavation and construction started that same month.  On June 23, 1872, a corner stone was laid by Rt. Rev. L. M. Fink, Bishop of Leavenworth.  After several months of construction the walls were brought up to a level of about 2 feet above grade and stopped. The parish ran out of money and Father Schoenmakers was opposed to going heavily in debt.

Construction of the church progressed with starts and stops for several years.  The settler-parishioners paid part of their tithe by helping move stone from two quarries south of town and by working on the construction crews.  As the building slowly rose above ground so did the sunflowers, small trees and brush that grew within its walls.  Some grumbled that they shouldn’t have built such a big church, but Fr. Schoenmakers knew that patience and prayer would see it through to completion. 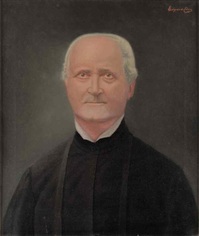 Father Ponziglione raised much of the money needed to finish the church.
A Secret Weapon.
Finally, Father Schoenmakers unleashed his charismatic and persuasive fund-raising weapon.  On July 5, 1880 Father Paul Ponziglione left on a two-month “begging expedition.”  His rail tour took him from Osage Mission to Denver and on to San Francisco, with a brief detour to Leadville, Colorado.  Along the way he was reunited with some of his friends and companions he had not seen since the Italian Revolution.  Most importantly he solicited money from affluent parishes and acquaintances along the way.  No doubt a great deal of the money came to Osage Mission via wire-transfers; but some potential railroad robbers might have been surprised at what the good father had in his luggage.

Father Paul returned to Osage Mission on September 14 and construction resumed immediately before winter weather set in.  That year the front wall and the three tower portals were completed.  The following spring the walls were raised and work continued to the church’s dedication on May 11, 1884.  Father Schoenmakers did not see it completed.  He passed away on July 28, 1883, Just ten months before the dedication.   Father Ponziglione saw to it that a Father Schoenmakers memorial bell was installed in the church tower and it is still there. 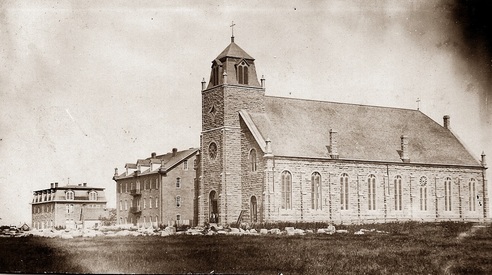 The original church tower, a low mansard-roof configuration, was replaced in 1900 with a tower that resembled the existing steeple. The interim steeple was destroyed in a 2005 storm.
​When the building was dedicated in the spring of 1884 there was still work to do.  A few interesting milestones follow:

​March 17, 1888 – A new altar was dedicated by Rev. Fr. Rosswinkle, assisted by Rev. Fathers. Masterson and Ponziglione.  It is the present altar which has been modified slightly.

July 19, 1888 — The Journal reports that the original Osage Mission log church was torn down.  During the previous four years, since the dedication of the new church, it had served as a game and wash room for students.  It sat about 215 feet west of the stone church and was the last of the Osage Mission buildings to be razed.  The log church became the symbolic "Cradle of Catholicism" and "Beacon on the Plains."  In later years the tall, lighted steeple of the stone church borrowed the "Beacon" nickname.  That's OK because it helps us remember the original mission.  For more information about the original church, follow THIS LINK.

August 16, 1888 – The Journal reports: "The two statues of newly canonized Jesuit Saints Berchmans and Alphonsus with the Patron of the church viz: St. Francis, have arrived from Paris, France, and will soon be placed in their niches, in the Grand Altar of the College church, making the altar then second to none in the state."  (see note 2.)

June 21, 1894 – A steam heating system was installed in the church and the Jesuit Monastery.

July, 1895 – The Journal reported that plumbing was being installed.

January 1900 – Stained glass windows were ordered from the J. J. Wagner of the Kansas City Stained Glass Works and they began installation in March of that year.   Pastor, Father Boniface, challenged the local parishioners to donate for installation of the windows and they came through!  Follow THIS LINK for more information about the windows, and the people behind them.

August 1900 – The August 9, 1900 issue of the St. Paul Journal reported that “Workmen were completing the tower on St. Francis Church.  It is being built 30 feet higher,”

Summer of 1902 – Painters apply fresco to the interior of the church, partially using money from the estate of of Mrs.  Peter Ward.

July, 1902 – Rev. Father Boniface consecrates two new bells in the church tower.  The bells are gifts from A. Schibi’s and Patrick and Mary Keating. 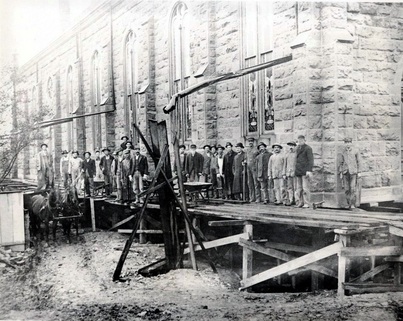 Much of the work-force involved with replacing the church foundation were parishioners supervised by Grant Renne employees.
And Then Another “Church Raising.”
By 1909 it was clear that the church foundation was failing. The Grant Renne Company of Kansas City was hired to repair the foundation.  In July of 1909 they began the work of raising the entire church, and tower, four feet and built a new basement foundation.  Much of the labor force for the immense project was local parishioners under supervision of Grant Renne engineers.  In November of 1910 the St. Paul Journal reported that an altar had been placed in the new basement chapel.
​
The church has continued to change and evolve over the years.  But it is important to note that the Passionists, who arrived in 1894, made a substantial investment in our parish and St. Paul.  Not the least of which was construction of the Passionist Monastery.  One has to wonder how our church would have fared in the early days had it not been for the Passionist commitment.  Two separate story segments describe the Passionist influence:​Or return to: 10. A Very Unique Community is Born
Some Reference Information.
Photos:

Note 1:  A sharp eye might have noticed the mention of "grey sandstone" in the first paragraph.  When the church was built the stone was grey.   It has oxidized to its present reddish-brown color over the years.  A walk around the church will reveal some newer pieces of stone, that were obtained from the same quarry as original stone, during a recent repair project.  Those are the silver-grey pieces.

Note 2:  An August 16, 1888 notation in the Annals of Osage Mission says: "The two statues of Jesuit Saints Berchmans and Aloysius have arrived from Paris, France, and will be placed in niches in the Altar of St. Francis Church."  However the corresponding Journal article says it was the statues of three saints including that of of Saint Alphonsus Rodriguez (not Saint Aloysius).  The third was the statue of St. Francis which was received at the same time.  The combination of Saints Francis, Rodriquez and Berchmans is correct.