Joseph Sevart (Shared by Tom Sevart.)
Joseph Elias Sevart (1848-1934) was born in Fulton County Pennsylvania on Christmas Eve of 1848 to Nancy Lauer Sevart and her German Immigrant husband John Sevart (1790-1858) who arrived in Philadelphia in 1833. [2]  Joseph was the fifth child of six, and all were born in Pennsylvania.   Those children are Anthony, Henry, Rev. Lewis, Mary, Andrew, Louisa T. and Joseph.  The latter three would settle in Labette County, Kansas.  Joseph Elias spent most of his Kansas time in and around Osage Mission - St. Paul, but  with farming interests near present-day Edna.
In 1869 Joseph arrived in Southeast Kansas purchasing a farm near Kingston, now Edna, Labette County.  On April 20, 1874, he married Anna Rosane Balfay (1853-1937), daughter of Michael and Mary S. Bosin Balfay, who were both Catholics.  The marriage was recorded in Labette County.  Judging from this article from the Saturday, September 14, 1878 edition of the Oswego Independent, Joseph did farming well:

"For the benefit of those who may have an eye on Southeast Kansas for a future home, we will here give, briefly, the experience of Mr. Sevart and what he has accomplished, the same amount of industry and economy will secure to others.  Mr. Sevart was reared among the lofty hills and towering trees of Pennsylvania, and came to this country some nine years ago, and built his cabin on the trackless prairie near the head of Snow Creek.  He brought northing with him but a good constitution, and a disposition to grapple with the stern realities of a pioneer life, and his reward is a fine farm of 240 acres, free from encumbrance, one hundred acres in cultivation, all necessary teams and farming implements, 700 bushels of wheat in his granary, 15 acres of good corn, a good wife and two bouncing babies.  It has paid Mr. Sevart to come to Kansas and it will pay others equally as well, if they come with the same determination."

While the Sevart farm was near Edna, at some point they established residence up north at Osage Mission.  He built two cabins on the Labette County farm and put its care under a tenant-farmer Frank Roth.  From news articles it appears the Joseph was well-liked and extended help to the neighbors when needed.  The Edna News published a humorous, good-natured report on Saturday, May 12, 1894:

The two "bouncing babies" mentioned in the Oswego Independent article eventually increased in numbers.  Joseph and Anna's family grew to fourteen, all but one of which lived fairly long lives:  Joseph Henry (1875-1964), Francis John "Frank", Laura Anna Goldsmith (1879-1950), Mary Louise James ((1884-1966), Rosella "Rose" Schneider (1884-1966), Estella Gertrude Davied (1882-1947), Clara Sevart (1885-1887), Daniel Edmund Sevart (1887-1877), Henry Eugene Sevart, (1888-1960), John Cornelius Sevart (1890-1960), Agnes Renner (1891-1956), Louis Albert Sevart (1893-1970), Lucy Cecilia Fugit (1895-1959), Paul Sevart (1898-1986).
The twenty-eight page draft of the Sevart family profile includes information about many of the children, spouses names and birth-death dates, and places of interment for all of the Sevart children and most spouses.   It also includes page-after-page of newspaper articles about family gatherings, travel, a trip to the 1904 St. Louis World's Fair, and interaction with the community, schools and church.  In fact, there are many articles that illustrate how much the Sevart family socialized with their community of Osage Mission - St. Paul.  The local names in those articles are pretty much a "Who's-Who" of early Osage Mission - St. Paul.  The book also includes a fairly long discussion of the military draft. for World War I and the effect on the family.
​Joseph Elias Sevart passed away May 19, 1934.  Anna Rosanne Balfay Sevart passed away on April 14,1937, both are interred at St. Francis Cemetery.
Religious Vocations.
Like many of our donor families there were quite a few religious vocations within the family.   Of the six listed here, one is not Catholic, and one was very well-known in St. Paul, Dodge City and Wichita:
Some Reference Information.
1.  Randy Dunavan is the author of Who's Behind the Window?.  Randy is presently trying to determine the best way to publish his 800+ page work — Self-publish, through a publisher, digital or a combination of means.  If you are interested in obtaining a copy let him know.  Randy's email address is randydunavan@cablelynx.com.
​
2.  John Sevart actually immigrated from Alsace-Lorraine which was a small territory between Germany and France.  The two countries have been at odds with one another for years over ownership and Alsace-Lorraine was finally annexed to France in 1945.  It is a complicated story that seemed further complicated by Wikipedia, so HERE is a fairly simple version. 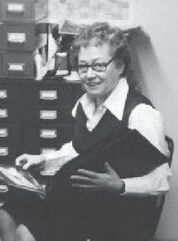 Sister Denise Sevart (Cropped from Southwest Register article, linked below)
​3​.  Sister Denise Sevart was the daughter of Albert Sevart and Louise Vohs Sevart.  She began her education on at St. Francis Elementary School and continued through High School in St. Paul. She entered the Congregation of St. Joseph as a postulant on Sept. 8, 1946. On March 19, 1947 she received the habit, professing final vows July 26, 1952.   Educated as a teacher, she eventually took the position as archivist for the Diocese of Dodge City under Bishop Eugene Gerber.   When Bishop Gerber moved to Wichita, she became Vice Chancellor/Archivist for the Diocese of Wichita from 1983 - 1990.  She completed her archivist career at Mt. St. Mary Convent, Wichita.  She also assisted during the early days of the Osage Mission-Neosho County Museum in St. Paul.

During her time in Dodge City, she became acquainted with Tim Wenzl who is now the Archivist Emeritus, Catholic Diocese of Dodge City.  He also writes for the Southwest Kansas Register, the newspaper of the Diocese of Dodge City.  Tim has written several parish history books for diocese parishes.  A couple of years ago Tim asked me to do some legwork and photography for his book "Catholic Place Names in Kansas" — a book project Sister Sevart encouraged him to take on.

Sister Sevart passed away on June 13, 2017.  Her obituary was published on page 8 of the Southwest Kansas Register.  On page 9 was a warm article written by Tim Wenzl about Sister Sevart.  It is linked HERE. 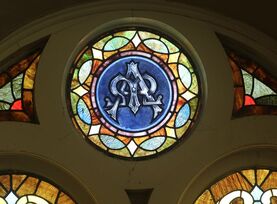 The J. E. Sevart & Family stained glass is crowned with Alpha & Omega. The Α and Ω are this first two letters of the Greek Alphabet; and a title of Christ and God in the Book of Revelation. (Photo - R. Brogan)