11. Regional Boarding Schools.
The signing of the Treaty of 1865 began the flood of white settlers toward the Mission even before the treaty was effective.   The coming of the whites and removal of the Osages convinced Father Schoenmakers that changes in the schools were necessary.  He already had a staff of experienced educators and administrators to assist with the transition. 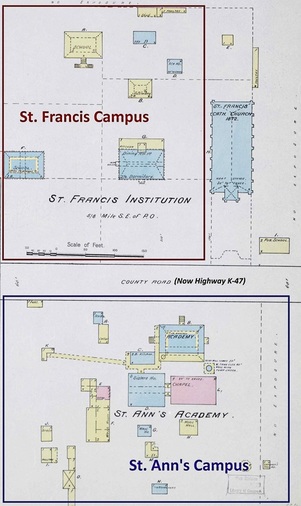 Follow the links below for information about these schools. (1892 map)
As whites entered the area and the town company was platting the new mission town, the existing schools quickly become inadequate.  The Osages continued to send children to the schools in smaller numbers; but white students more than made up the deficiency.   Rapid changes were needed--and coming.

In January of 1869 a two-story multi-purpose frame building was erected and became the first of the parish or public system.  Built under the direction of Father Philip Colleton, part of the structure served as what was likely the first lending library in Kansas.  The remainder was used by the Sisters of Loretto to teach the lower grades to young girls.  The building, named St. Francis Hall, also served part-time as a public meeting hall.
​
In May of 1870, St. Francis Institution for Boys was incorporated with Father Schoenmakers as president.  During the next two years the Jesuits built two large, multi-story stone building including the three-story (plus basement) St. Francis Institution building and a four-story Jesuit Monastery.  Over the next few years the boy’s campus grew with addition of several structures.

​In October of 1870, Father Schoenmakers deeded one hundred acres of land from the east side of Section 24 to the Sisters of Loretto.  Construction of what would be the first of several buildings on the St. Ann’s Academy campus began quickly and the three story structure was opened in September of 1871.  That building was later expanded with a fourth floor and the campus continued to grow for several years.  As the new buildings rose the original Osage Manual Labor schools began to disappear.

Over the next several years these schools attracted students from across the United States and Mexico with their unique curriculum and a reputation for being among the finest frontier learning institutions in the country.   The young boarders who came for education found themselves welcomed as an integral part of the new Osage Mission community.  Follow these links for more information:
Go to:  12.  Transitions  - or -  Story
Some Reference Information: