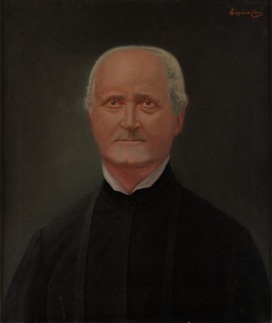 Father Paul Mary Ponziglione
​The above words were published, in 1939, by Sister Mary Paul Fitzgerald in her book Beacon on the Plains.  She went on to say that an attempt was made at one time to erect a statue on the Topeka statehouse grounds in his honor.  This effort was doomed from the start because he spared no quarter in his open criticism of the Freemasons.  There is no doubt that serious historians and scholars are well aware of the work he did; and his voluminous journals that recorded the birth of the western frontier, beginning in Neosho County and then spreading across the frontier.  But it seems odd, and disheartening, that his memory seems all but lost here in Osage Mission-St. Paul Kansas.  His story, and that of his colleagues, is ours to protect.
​
​Count Paul Mary Ponziglione was born in Cherasco, Piedmont, Italy on February 11, 1818.  He was of noble descent on both sides of his family.  He was educated as a nobleman but in 1839 he abandoned royalty and entered the Jesuit novitiate at Chieri, near Turin.  He was ordained in 1848 and during the revolution of that year he was injured by an angry mob and briefly imprisoned. 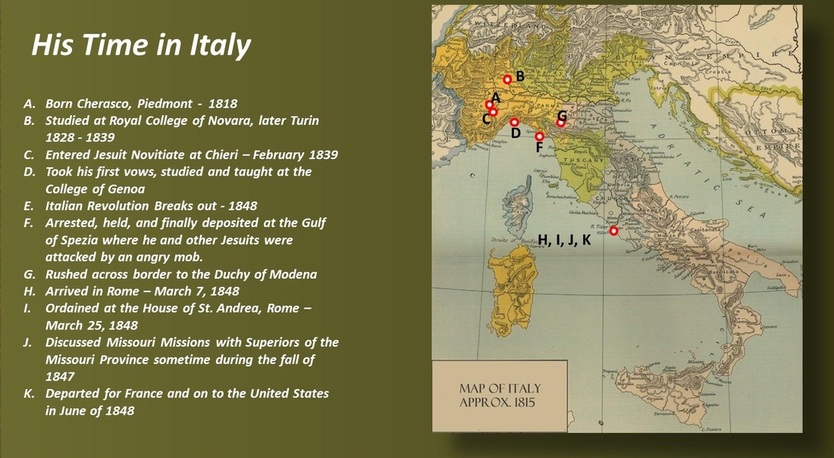 Main Events of Father Paul's Time in Italy.
​After escaping he traveled to America, landing in New York harbor.  On arrival, he was assigned to do missionary work in the Missouri Province.  He spent two years near St. Louis and at Bardstown, KY.  In 1851 he traveled with Bishop Miege to Osage Mission where he spent the next 38 years working with the Indians and white settlers.   During his time at Osage Mission he established more than 90 mission stations in Kansas, Oklahoma and Missouri.  Much of this work was done from horseback or his covered “ambulance”.  He also played an important role in assisting Father John Schoenmakers with Mission business.  Fr. Ponziglione oversaw the Mission during a turbulent period of the Civil War when Fr. Schoenmakers was forced into exile for several months.

Father Paul and the other early Jesuit and Loretto missionaries at Osage Mission watched Kansas develop from vast grassland into a landscape of bustling communities.  But Father Ponziglione and his colleagues also contributed to Kansas’ growth by founding mission stations, several of which matured into churches.  During the early 1880’s he played an important role in securing funds for our own new stone church.  He also assumed a more active local role in running our schools and the church.  In 1889 he celebrated his jubilee in that church—one of his final acts in Kansas.  In August of 1889, Fr. Paul left his beloved Osage Mission for Marquette College and never returned.

His stay at Marquette lasted only seven months.  In the spring of 1890, at age 72, he returned to the prairie—this time at St. Stephen’s Mission in central Wyoming.  The founding priest needed the assistance of Father Paul’s missionary experience.  During Father Ponziglione’s 21 months at St. Stephen’s he also served missions at Lander and Fort Washakie.
​
After completing his Wyoming work Father Ponziglione was sent to St. Ignatius College, Chicago.  There, he simply switched his missionary labors from prairie trails to interurban streets.  In 1892 he founded the Guardian Angel Italian Mission for desperately poor inner city Italians.  He served as the historian for the college and chaplain of St. Joseph’s Home for the Deaf where he organized a sodality.   He was also the Catholic chaplain among the inmates at Bridewell Prison.

During his time in Chicago, Father Paul wrote a lengthy memoir.  In reading the introduction to that work you get the impression he was under some duress from his superiors.  But in his usual tone of modesty he wrote that ..."never having achieved anything very remarkable ..." he decided to dedicate his memoirs to his former superior, Father John Schoenmakers.  Our transcription of his memoir, still a work in progress, is linked HERE.

In March of 1900 he wrote one of the last entries in his voluminous life’s work of journals:  “March 18 Sunday, this morning I had Mass at Bridewell.”  On March 28, 1900 the legendary Jesuit circuit rider died of bronchial pneumonia.  He is buried at Cavalry Cemetery in Chicago.
About the Portrait:
The portrait of Father Ponziglione, at the top of the page, is an oil-on-canvas painting that is held by the Kansas State Historical Society (KSHS) in Topeka, Kansas.  However, it has very strong roots to our St. Paul Knights of Columbus Council 760.

In 1906, about three years after it was founded, local Knights of Columbus Council 760 commissioned Chicago artist Edgar Leon to paint the portrait at a cost of $50.  Once completed it was sent to St. Paul where it was displayed for a short time. Then, on March 25, 1907, the painting was donated to the KSHS.  The Council, including a charter officer named W. W. Graves, wanted to ensure the likeness of the missionary priest was preserved.  It was displayed for some time and then moved to storage.

In 2014 we contacted the KSHS to see if it was available for viewing and possible reproduction.  After a short search they located it and Rosie and I traveled to Topeka to view it.  We were apprehensive about its condition after well over 100 years; but we found it in excellent condition.  During the late 1980's the historical society sent it to an art conservator for cleanup and restoration—at a cost of $780.  Rosie and I made arrangements to have the painting digitized and about one week later we received a very high-resolution TIFF image in our Dropbox account.  Our plans were to print the image for display in our parish hall or church.

Finding the painting was rewarding, but in a bittersweet way.  W. W. Graves dedicated his life to telling the story of the Catholic Mission and Neosho County in a series of books.  He also submitted countless papers and articles to the KSHS.  By the time of his death in July of 1952 Graves and the Osage Mission/St. Paul story were well known in Topeka.  During the time we spent with the KSHS archivists it was very clear they had no knowledge of St. Paul or Father Paul Ponziglione.
​​Go back to Characters - or - go to Story
Some Reference Information:
1.  Obscurity.  The headline is quoted from a paragraph in "Beacon on the Plains" by Sister Mary Paul Fitzgerald, page 188.  The following paragraph reads:  "An attempt was made at one time to introduce into the Kansas legislature a bill for the erection in his honor of a monument on the Capitol grounds to commemorate his contributions to the state.  From the onset the success of the proposal was doubtful owing to the hostility of the Freemasons to whom Father Ponziglione gave no quarter in his sermons."
​
A curious fact that is disturbing—at least to me.  Much of the Jesuit missionary work north of the Santa Fe Trail was done by Father Pierre Jean De Smet.  Some of De Smet’s work was along the Missouri River corridor between St. Louis and the northwest United States.  He also visited Kansas.  In the areas where Father De Smet traveled there are many tributes to his name including a town (De Smet, SD), libraries, statues and at least one school.  The name De Smet is almost synonymous with exploration, adventure and missionary persistence.

The work of the Catholic Mission Jesuits was no less important than De Smet’s labors; and the scope of their travels is also impressive, to say the least.  They sowed the seeds of civilization in a very large area and assisted with the startup of many communities.  They established churches, many of which nurtured schools.  In fact, nearly all of the Catholic schools in the nine-county southeast Kansas area are linked to the Catholic Mission. They faced danger and they, too, were rigid in their determination to do the work of their church.  Then, why is it that here, even in the hometown of their labors, our prairie missionaries are all but forgotten?

2.  Much of the information used to compile this page came from the following sources:
3.  The "Map and Milestones" illustration used in the banner and body was part of a program presentation prepared and shown by the Osage Mission-Neosho County Historical Society several years ago.

4.  The "Story" pages provide much more detail regarding the missionary work done by Father Paul and other Osage Mission Jesuits.