There Are Some Great People In This 100+ Year Old Photograph — Great Grandparents, Great Aunts, Great Uncles and Some Are Our Cousins.  Let's See How Many You Can Identify.
About a month ago we published an article about our St. Paul Middle school building.  Some of the stone in that building came from the earlier Jesuit men's college.  That article featured a photo of the St. Francis Institution Boy's College building, the  Passionist Monastery and St. Francis Catholic Church.  The story noted that the configuration shown on THAT PAGE would have only existed for nine years because the monastery was completed in 1912 and the college building, which had been converted into a public school, burned in 1921.

The photo was given to us in by a local gentleman; and it stirred some conversation.  Surprisingly, there are several area citizens who were unaware of the Passionist Monastery.  Shame on us for letting that huge chunk of our past fade away.
Well, a couple of weeks ago the same man gave us another remarkable vintage photograph.  From the handwritten inscription it shows St. Francis Public School students for the 1915 - '16 school year.  I tried to count heads — some are nearly hidden — but it looks like about 112 students.  Apparently the photographer had them looking toward the sun because several are squinting and one young fellow is holding his hand over his face.  The Passionist Monastery is also visible at the right side of the picture. 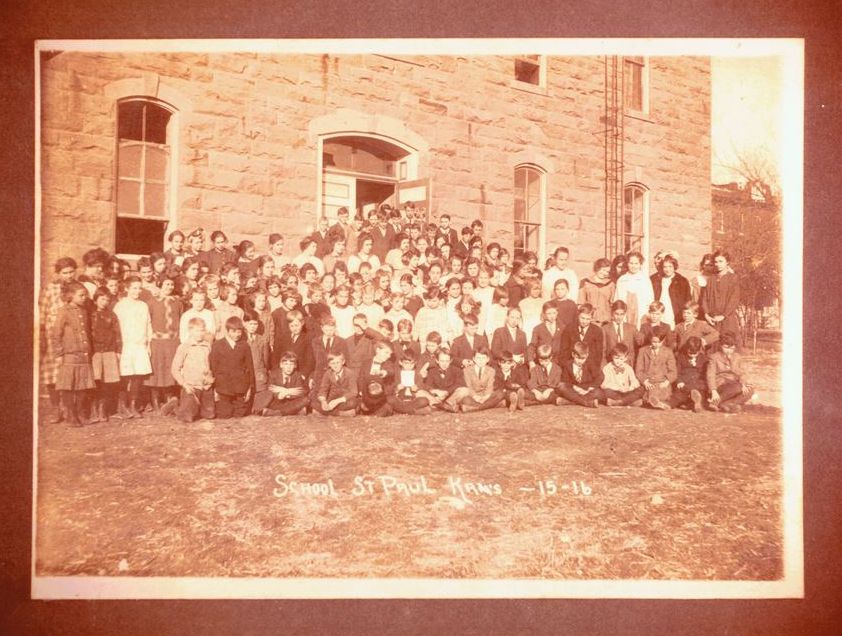 St. Francis Public School Students, 1915 - 1916, In Front of the Original St. Francis Institution for Boys building.
The neat thing about this photo is the people in it.  Suppose it was taken in 1916 — that was 104 years ago.  The students might be in the six to fourteen age range.  That would have made them around 110 to 118 years old today.  That is too old for most grandparents; but long-time St. Paul families should assume there are several great grandparents, great aunts and great uncles and some other relatives in that photo.
The photo can be clicked to enlarge.  But for those who want to examine it more closely; or compare with other family pictures, we have provided a couple of options.  The two photos below are linked to JPG files of much higher resolution.  One is in sepia like the original and one has been converted to Black & White and enhanced to sharpen a little.  You can click on an image and download it to your computer.  If you find someone you know, and want to print or frame it, that is fine.
Instructions:
These files are large and might take some time to download.  The sepia file is 10.0 Mb and the enhanced Black & White is 28.9 Mb.  When you click on the photo, a new window will open.  When the image is finished right-click on it to download to your computer.
Here Is a Start:
I browsed through a copy of the Annals of St. Paul to see if I could come up with names of some families that might have been in school, or at least, were here at the time.  This is in no way an exhaustive search:
Atkinson, Balfay, Berry, Bohrer, Born, Brogan, Burns, Coomes, Cooney, Diskin, Doherty, Dowd, Ensch, George, Grillot, Groner, Grosdidier, Heck, Hentzen, Hopkins, Johnson, Joyce, Kelly, Kennedy, LaForge, Locke, McCall, McElroy, Madl, Moriarty, Munding, O'Brien, O'Bryan, O'Rourke, Owens, Petty, Phelen, Roycroft, Schoenhofer, Smith, Van Leeuwen, Venneman, .... and many more.