2. The W. W. O'Bryan Window, Restored by His Son W. E. O'Bryan.
People Behind the Two Windows.
Chronologically, we have to start in the west sacristy at Position 18, The Henry M. Obrien Window.  Henry O'Bryan was W.W. O'Bryan's father.  Henry Miles was born to Francis Leo and Sarah Ann Lancaster O'Bryan on March 13th, 1835, near Loretto, Marion County, Kentucky.  It appears as though the O'Bryan family had a close relationship with the historic Holy Cross parish. [2]    On September 13,  1858 Henry Miles married parishioner Susan Emily Hagan in that church. Henry and Susan had eight children. In 1871 the O'Bryan family left their Kentucky home and moved possessions across Missouri, to the new community of Osage Mission.  At the time of the move, their #4 son, William Wuyts, was about four years old.  There is a link below to the Henry O'Bryan window that is now in the sacristy.

And with the introduction of William Wuyts (W.W. O'Bryan) [2] we can scoot back across the church to Window Position 2.   William probably had few actual memories of the Holy Lands of Kentucky, but he likely had memories of the family's river trip from Louisville to Kansas City, then the ensuing 140 mile ox-wagon journey to Fort Scott, then onward to Osage Mission.  After settling in Osage Mission, William and siblings were educated in the public schools that were staffed by Loretto and Jesuit teachers that previously ran the Catholic Mission schools.  William left school after the sixth grade to take up duties in his father's cattle distribution business; and at that point, Henry M. became William's teacher.   The March 2, 1881 edition of the Osage Mission Journal reported "O'Bryan & Baxter, one of the live stock firms of this city, recently bought a "bunch" of 75 head of fine fat cattle within six mile of Girard, and drove them to Osage Mission for shipment.  They also bought a lot of cattle this week at McCune."  It would be safe to assume that W. W. O'Bryan was on that drive.

Now, we are going to stop!  Simply stated, there is way too much information behind the two O'Bryan windows to summarize on this web page.  The two sections of the book that cover the Positions 2 and 18 windows make up the largest part of the publication.  In rough manuscript, the Henry O'Bryan chapter is 72 pages long; the W.W. O'Bryan section is 139 pages — 211 total pages.  Because of early family ties, the local O'Bryan story went back to well before Henry Miles birth.  During their time in Osage Mission/St. Paul the O'Bryan's crossed paths with many area families and businesses. [3]

As you look through the Who's behind the Window?, O'Bryan stories expect to be surprised: There are many, many more stories wound together like a fascinating spiderweb of information! 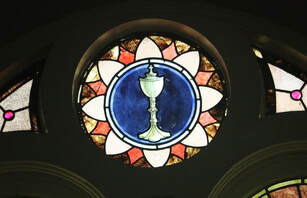 The W.W. O'Bryan & W.E. O'Bryan Window #2 is crowned with a covered Ciborium, a reservation for the Most Holy Eucharist. (Photo - Ron Brogan)
Some Reference Information
​1.  ​The section of the book that discusses the early O'Bryan story in Kentucky goes much farther back than Henry or W.W. O'Bryan.  Who's Behind the Window? traces Henry O'Bryan's ancestors back to the first group of Catholic settlers who arrived in Maryland in the in the late 1600's.  In the face of religious persecution, a group of Catholic pioneers then migrated to west-central Kentucky and built the First Catholic Church, Holy Cross, in 1792.     But even before that, the author's research found links to the early Church of England.

2.  William's middle name likely comes from a Dutchman, Rev. Fr, Francis Wuyts.  It was common at the time to include the baptizing priest's name in a child's name.  At the time, Rev. Wuyts was associated with Holy Cross; and might well have been associated with some of the many Catholic parishes that surround Bardstown.
​
In a letter written to Sister Lilliana Owens, on January 20, 1935, William Whites (W.W.) Graves says he was baptized and named after Father Whites who was the pastor of Holy Rosary Catholic Church of Manton, Kentucky.  He also said that he was baptized by the same priest who baptized W.W. O'Bryan.  Graves was born on October of 1871— O'Bryan in January of 1867.  Manton is very close to Holy Cross, even in horse and buggy terms.  Since Graves and O'Bryan knew each other well, there is no reason to believe this isn't true, and perhaps Graves parents decided on a more conventional spelling.

The central Kentucky area, around Bardstown, is very Catholic, even today.  There are many parishes and towns like Manton and Holy Cross that are tiny by any comparison with Bardstown.  Here is a simple map to acquaint the reader with the area.  This area is, even today, very Catholic and has, for years been called "The Holy Land." 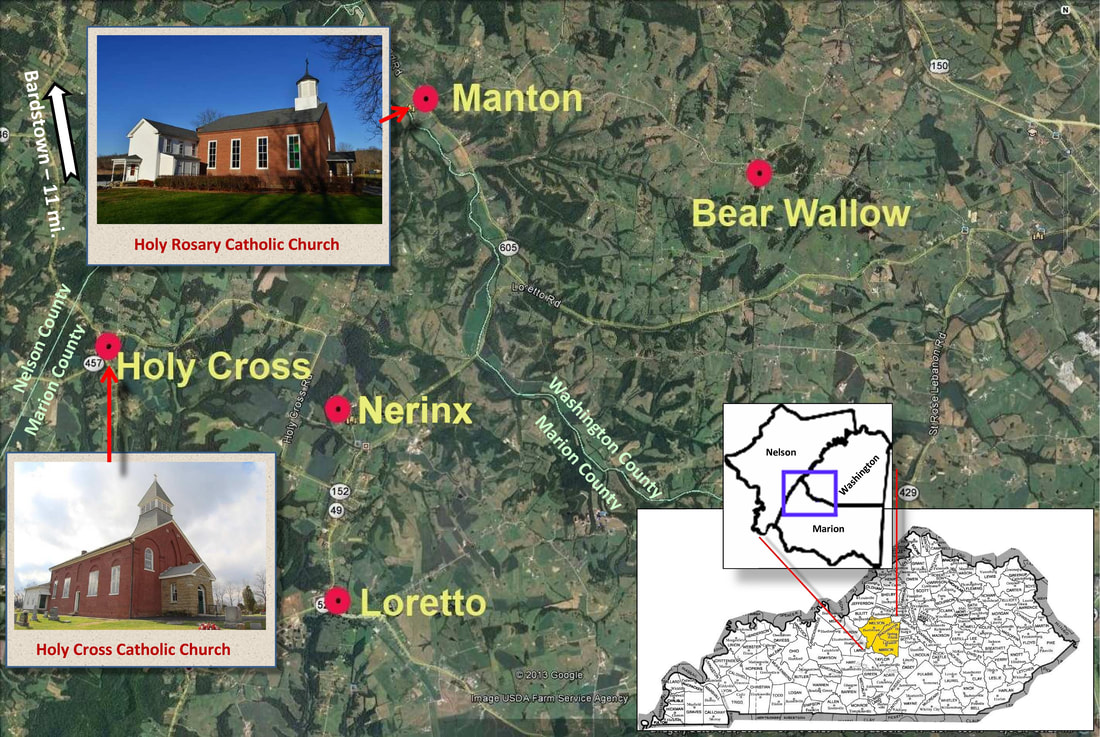 Map is part of the W.W. Graves display at the Graves Memorial Public Library, St. Paul, Ks. - R. Brogan, 2013
​3.  If you are interested in obtaining a copy of Randy Dunavan's Who's Behind the Window?, contact Randy Dunavan directly at his email address:  randydunavan@cablelynx.com