Above - Fr. Bax's birthplace in Belgium
Father John Bax:  He gave his life for his children — The Osage (Part I)
Father John Bax, a Belgian immigrant, assisted Father Schoenmakers in all facets of running the Mission during its earliest days.  In many respects he might have been the more capable of the two men.  A brilliant vocation was cut short by his untimely death.  There is no photo of Fr. Bax but the illustration shown here seems to capture his devotion to the Osage. 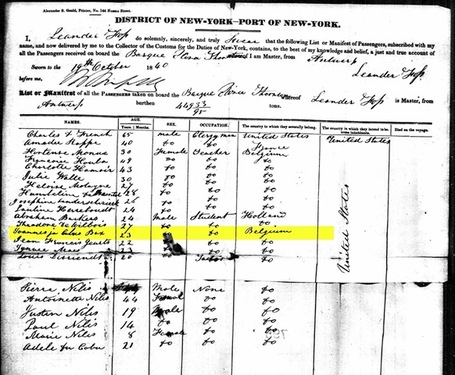 Passenger Manifest - Arrival of Fr. Bax in New York
John Bax was born January 14, 1817 in the village of Weelde near Turnhout, Belgium.  He was the oldest child of Joannes Petrus Bax and Maria Christina Oomen.  At birth he received the name Joannes, Jacobus Bax.

We know that he arrived in New York via passenger ship on October 14 of 1840 (Manifest shown at right).  It was likely after his arrival in the United States that he was called "John."  He was formally ordained into the Society of Jesus shortly afterwards, on November 12, 1840.  Perhaps he provided a good influence for his younger brother, Jacobus Bax.  Jacobus also became a missionary priest and a bishop who served  in Hsi-Ying-Tzu, China.  Jacob passed away in China in January of 1895.
​
Father Bax was 30 years old when he, Father John Schoenmakers and three Jesuit lay brothers traveled to our area to establish the Catholic Osage Mission.  An early letter, from Father Bax to prominent Jesuit missionary Father Pierre Jean de Smet, reveals some of the apprehension the young priest felt when he arrived:

​“It would be impossible to paint for you the enthusiasm with which we were received … At first sight of these savages … I could not suppress the pain I felt … The adults had only a slight covering over the middle of the body; the little children, even as old as six or seven years, were wholly destitute of clothing. Half serious, half jesting, I thought that a truly savage portion of the Lord’s vineyard had been given to me to cultivate.” 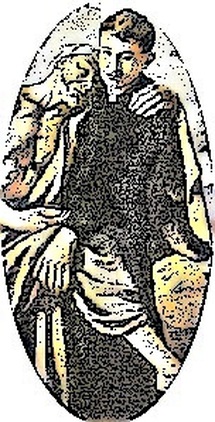 This caricature of Father Bax captures some of the love and compassion the priest showed for his Osage "children."
Although ten years younger than his superior, Father Schoenmakers immediately realized that Bax was immensely gifted.  He was an eloquent speaker and had extraordinary facility for acquiring languages.  Within a short time after his arrival at the Mission, Father Bax had mastered the Osage tongue so well that the Indians joked he spoke it better than themselves.
​
​Father Bax quickly gained the confidence and friendship of the Osage people, especially the children.  Soon his enthusiasm won the love of the parents who called him the "Father who is all heart".  Father Bax is credited with baptizing two thousand Indian adults and children.  He was also responsible for establishing at least eleven missionary stations including the U.S. Army Garrison Station at Fort Scott and as many as five missions in Missouri.

With his passion there might have been a flaw.  Father Bax seems to have been a workaholic who accepted any challenge, often at the cost of personal well-being.  By the time he was 35, the rigors of the frontier had taken its toll. Father Bax was a weakened man.  It is reported that among his 2,000 baptisms approximately 800 were performed during a Black Measles epidemic in 1852.  As a result of his efforts to minister to the Osage Father Bax was sickened and taken to Fort Scott for treatment.  In a fragile physical condition, he could not recover.  He succumbed to a common frontier ailment, scurvy, on August 5, 1852.  In the moments prior to his death he gave a final request to Father Ponziglione, "Father, take care of my children."

Father Schoenmakers knew he had lost an incredible young priest when Father Bax died.  He did not measure Father Bax's influence only by the number of converts but by his influence on the Osage People. "It seems...that after his death he speaks more forcibly to the memory and hearts of the Osage than when alive".  Later, Father Ponziglione wrote of both Schoenmakers and Bax, "For it they receive no thanks; praise they did not expect, for God alone looked down upon their labors and He was their only witness."
​
Father John Bax is buried in the Jesuit field in St. Francis Cemetery, St. Paul. KS. 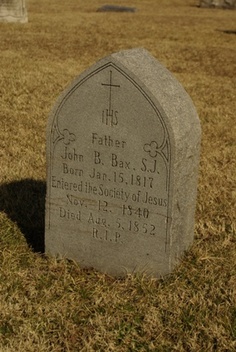