Above - Father Schoenmakers' birthplace in Holland
Father Schoenmakers – The Father of Civilization in Southern Kansas.
“Different superiors having more than once suggested to me, to publish some of my experiences…., I reflected on the matter, and being conscious to my self of never having achieved any thing very remarkable among them, I thought there was no reason why I should make any such record.  However, on considering that by complying with their request, I would have a good opportunity of discharging a duty of gratitude I owe to dear Father Schoenmakers with whom I did pass the happiest days of my life, I put my mind together to gather a few items, which, meanwhile they would bring light to the history and customs of the Osages ,  would also show at least in part, what really heroic virtues the good father was frequently performing in trying to promote their spiritual as well of material improvement.“ — Introduction to The Memoirs of Fr. Paul Mary Ponziglione; May 1897. 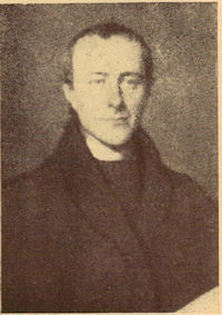 Father John Schoenmakers
The quote opens the memoirs of legendary Jesuit trail rider Father Paul Mary Ponziglione.   When I first read it two things came to mind:
​John Schoenmakers was born November 20, 1807, in a humble home in the little village of Waspick, Langstaat, in the province of North Brabant, Holland. His father was Henry Schoenmakers, and his mother was Petronella Kam. Both parents were plain, honest citizens with no record of achievements that distinguished them from their neighbors.

At that time, Catholics were in a minority in Holland.  However, they were predominant in North Brabant and the future missionary spent his boyhood in a strong Catholic environment.   W.W. Graves wrote “He seemed to have inherited the strong character of his father and the gentle virtues of his mother.  He was a bright, intelligent, active boy who gave distinctive evidences of a useful life.” 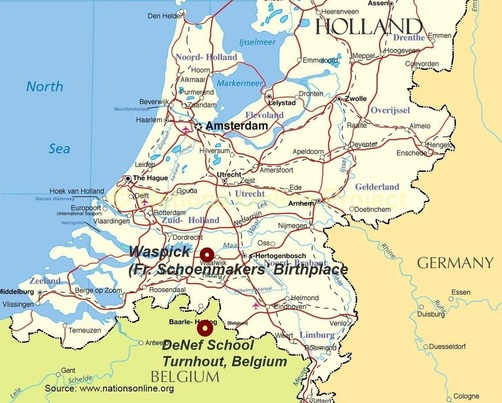 Father John's birthplace and location of his missionary training.
His early education was received from his parents and the local schools.  Then he entered the school of Charles De Neff in Turnhout, Belgium.  De Neff was a wealthy layman who devoted a portion of his wealth to a college in Turnhout where young men were educated for the foreign missions.  Among the men who preceded John Schoenmakers was legendary Jesuit missionaries Fathers Pierre-John de Smet and Charles Van Quickenborne.    John Schoenmakers became a secular priest in Belgium, saying his first mass on April 16, 1833.  At the time of his ordination the governments of Holland and Belgium, as well as other parts of Europe, were in a state of political upheaval.  Being a Dutch by birth but a devotee of the religion of the Belgians, he saw no field for his work among the opposing factions.  Young Father Schoenmakers departed for New York on Christmas day of 1833.

Upon landing in the United States, Father Schoenmakers wasted little time in traveling to Georgetown Maryland and offered himself to the superior of the Georgetown Jesuit Novitiate.  With the young priest’s education at De Neff he was probably an attractive candidate and he was readily accepted.  He became a member of the Jesuit Order on January 16 of 1834.  He and several other young priests were sent to the small colony of Father Van Quickenborne, at Florissant, Missouri, the following July.  This is where he met Father de Smet and other Jesuits who had come from Belgium twelve years earlier.

The next ten or more years in Father John’s life appear to be of fairly routine service to the church.  He was assigned to St. Louis University during a period when it was growing.  In 1837 he became superior of College Hill, a three hundred acre farm that was used by the Jesuits for retreat and rest.  Development of the College Hill and college facility slowed for a while.  Finally, the city of St. Louis grew into the College Hill Farm in a development called Lowell and the farm’s value increased dramatically.   Sale of the College Hill land, in 1847, helped rejuvenate development of the University.  But by then Father John Schoenmakers was Kansas bound.
​
Father Schoenmakers made his first visit to Osage Mission in the fall of 1846.  It was a scouting mission of sorts.  He inspected the mission buildings that were still being built by government contractors.  Even then he probably noted that the buildings were being erected quickly by contractors anxious to get back to civilization.  He also noted the remoteness of the location.  The Mission was far from the habitat of white men.  The nearest point of government authority was thirty-five miles away at Fort Scott.  The fort was also the closest and only regional source for the receipt of supplies and materials.  Father Schoenmakers set about to draw up a list of supplies and equipment needed to support the Mission for several months.  Then, after spending time with the Osage, he headed back to St. Louis to set his missionary plan in motion.
The Man.
Much of the story in this website is dedicated to the work of Father Schoenmakers and his contemporaries.   There is no point in repetition here (but there are links below to lead you to important parts of his story).  What kind of man was Father John Schoenmakers?   If I was going to pick one attribute to describe him it would probably be “brilliant.”   But that assessment might not have been shared by all.  He was frequently criticized by his superiors and others for being disorganized, unable to meet budgets, lack of economy and his inability to follow directions.   However, in discussing a letter written to a government official Sister Mary Paul Fitzgerald said:  “he was willing to incur ‘the lawful danger of reproach’ even from his superior, if only he could secure the means to educate the Indians.[1]”  In other words his management style might have been to do what he deemed necessary, and then beg forgiveness later, if it got the job done.

He did get the job done.  Even if you set aside the demanding periods of drought, epidemic and war he supervised, he was a very effective manager;

​
​Father John Schoenmakers is buried, with many of his Osage Mission colleagues, in St. Francis Catholic Cemetery, near St. Paul Kansas.
Some Reference Information:
[1] From: Beacon on the Plains, Sister Mary Paul Fitzgerald, 1938.