To begin, the Hentzen story is rather long, and this page is longer than most in the "Windows" series.  It involves a very large family and several businesses.  The story fills more than seventy pages of the manuscript of Who's Behind the Window?  The information presented here will be at a very high level, but we will try to give you a good synopsis of what you will find in the book.

Our Hentzen story in America begins with the family's progenitor Henry Fredric Hentzen (1799-1887), who was originally a native of Berlin, Germany.  Henry immigrated to America, with family, in the 1830's.  The Hentzens made their way to Ohio where Henry's first wife (name unknown) passed away.  Henry later married Margaret Janet Chambers Meiers who was born to Swiss parents.   In 1842 the Hentzens moved to Jefferson City, Missouri where Henry was engaged in his barbering trade.  It was there that Christian "Chris" Peter Hentzen was born in August of 1844.  Four years later a second son, Joseph, was born.  in 1850 they made another move of about 200 miles west to Clay County, Missouri where their third child, Henry, was born.  Between 1854 and 1862, children Mary Familia Paulina, Gulielmum Petrum and Jacoburm Francium were born.  The Hentzens were devout German Catholics.  The book talks, in some detail, about the attraction of the immigrant German families to Catholic Churches and communities.  While in Missouri they were often on the edges of Civil War action.  Henry Hentzen passed away in Gallatin Township, Clay County Missouri on January 23rd 1887.

Christopher Peter "Chris, C.P" left left home and enlisted with the Union Army On May 15, 1865 and served five months.  It is curious that he enlisted with the 11th Calvary in Company "D" in Kanas, rather than Missouri.  Much of his time was spent guarding stage routes, telegraph lines and protecting against Indian attacks.  While it might sound like easy duty, his regiment lost 173 men during service.

Among bits and pieces of information it is determined that 26 year old, newlywed, Chris Hentzen and his first wife, Caroline Deister Hentzen, arrived in Osage Mission in 1869.   Shortly after first son, and window co-donor, Christian Jerome "C.J' was born.  They would have one more child, Margaret Elizabeth, "Minnie."  Sadly, on March 7th, 1872, Caroline died during childbirth of a second daughter, Margaret Caroline, who also died.  In 1873, Chris married a second generation Irish woman named Margaret O'Grady.  Chris and Margaret had sixteen more children, three of which died in infancy.  The book will provide information on all, but it is noted that two daughters followed religious vocations:  Cletus, Sister Mary of the Sacred Heart, and Lula Mae, Sister Mary Hubert. 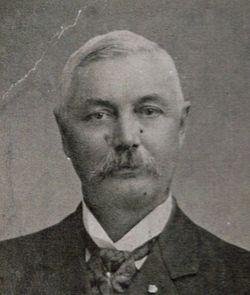 Christopher P. Hentzen (Shared by Daniel Koch)
​Chris Hentzen was a smart and industrious man, which is good considering the number of mouths in his household.  Over a period of forty or more years Chris and his son C.J. were involved in business ventures of many types.  The first, and most lucrative was the manufacture and sale of furniture items.  From looking at early advertisements this grew into wallpaper and other décor items and the business started to resemble a home store establishment.   By the late 1890's the furniture business morphed into the manufacture of caskets and eventually full undertaking services.  This was not unusual for furniture builders in that time.  At times he appeared to move toward food and beef sales too,  But the furniture business was a mainstay that both Chris and Son Christopher Jerome took primary interest in.  Over the years some of the other Hentzen sons joined into the business, but C.J. took a strong managerial position with Hentzen Furniture,  As you browse through Who's Behind the Window? there are several accounts of C.J. traveling around the country on company business.

May 8, 1880 Temperance Banner, Osage Mission. (click to enlarge.)
C.P. Hentzen Passed to his eternal reward on September 16, 1916 and age 71.  He had built a strong family business that outlasted him by many years.

During the late 1800's and early 1900's Osage Mission - St. Paul was a boom-town, with many businesses, a Board of Trade, several banks, etc.  Anyone interested in frontier growth and commerce will find the Hentzen story interesting.  And, we should remember that these successful businessmen didn't come here with a MBA from a prestigious business school.  Many were settlers who arrived with little and relied on brains and hard work.  The Hentzen story, as well as several others in Who's Behind The Window?, provide a good, often detailed, look at how pioneer towns prospered.   For more information on the businesses in 1880's Osage Mission, follow THIS LINK.
Some Reference Information.
1.  We explained, up front, that this was a high level look at two members of an early Osage Mission - St. Paul business family.  There are just to many details regarding family members, businesses, organizations, tragedies and social connections for this page  — way too many.  While the Hentzen story in Who's Behind the Window? isn't the longest in terms of page content, it is every bit as complex and interesting than some stories that used many more words.  It is a fascinating look at a Civil War Veteran who moved to Osage Mission and raised a remarkable family.
2.  Four Hentzen women, and one man, followed religious vocations.  In the introduction we mentioned musically talented Minnie Hentzen and her eventual entry into the Loretto order. 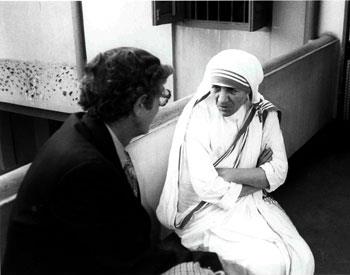 Bob Hentzen With Mother Teresa (CFCA Archives)
3.  One of the Hentzen grandsons achieved some notoriety and respect in pursuing his vocation.  Robert Keith Hentzen was born in 1936 to Raymond Gerald and Kathleen O. LaForge Hentzen in the community of Kenny Heights, Kansas.  Bob was one of 14 children. From an early age, his parents instilled in him and in his siblings a deep faith and spirit of caring for others. These lessons were reinforced by the Sisters of St. Joseph of Carondelet, who staffed the parish school, and later by the Christian Brothers, his teachers at De La Salle High School in Kansas City.

Beginning in his basement, he launched what became the Christian Foundation for Children and Aging (CFCA).  The organization he co-founded with three siblings, Bud Hentzen, Jim Hentzen and Nadine Pearce, and friend Jerry Tolle, became a global force of love in the world. Today, CFCA has grown into a movement of more than 250,000 sponsors who are supporting more than 300,000 children, youth and aging friends worldwide.

Bob Hentzen passed unexpectedly on October 8, 2013 in Guatemala.  There is more about Bob in the book.

See — We told you it was a remarkable family! 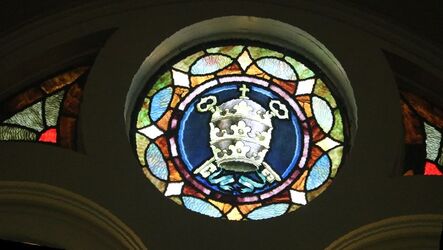 ​The C. P. & C. J. Hentzen  stained glass window is crowned with the Papal Tiara with the keys of Simon Peter ~ symbolic of Authority that Christ gave Peter and the Apostolic See.  The Triple  Crown is symbolic of the Pope's moral Authority.  (Photo R. Brogan).