The Exchange State Bank Robbery - 1936!
Fielding Hopkins, the associate editor of the St. Paul Journal, saw one of the town's biggest news stories unfold before his eyes — and then he became part of the story!
Occasionally I find interesting things on microfilm while looking for something unrelated.  That happened last week as I researched family information for a friend.   In looking for an obituary for Mr. Edward McCall (1850-1936), I found myself looking at a front page Parsons Sun article about a 1936 armed robbery of the Exchange State Bank here in St.  Paul.  It was extensive, with a large multi-photo picture, a full-column article with a continuation column on page 10.  Then there was a short boxed article about the role my own cousin, Fielding "Hoppy" Hopkins, played in launching a posse that pursued the robbers.   The following is condensed from the articles.  If you want to read the actual stories, follow the links below. 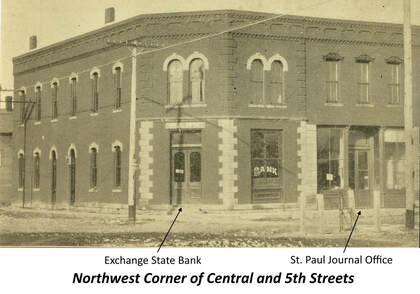 Exchange State Bank and Journal Office.
Thursday, July 7, 1936 — Fielding Hopkins, the associate editor of the St. Paul Journal, was working in his office when a car outside of his window caught his attention.  It was a 1935 Ford V8.  At first he didn't pay much attention. But then he noticed the engine was running and the man sitting in the car was staring back at him.  That's when Hoppy became suspicious.

Across the wall, Exchange State Bank, assistant cashier F.J. David was beyond suspicious.  A tall man, wearing dark glasses, had entered the bank, walked up to his cage and pulled a gun from beneath his shirt.  Also in the bank at the time was J.F. Denton the head cashier and Mrs. Denton the bookkeeper.   The gunman forced David to walk north to the wall of the bank where the bandit went behind a glass partition.

At that time a second man, also in dark glasses, entered the bank, went through the gate, and approached Denton who was talking on the phone, with his back to David.  Blind in one eye, Denton was unaware of what was happening.  But when Mrs. Denton saw the gun, she raised her hands.

The second bandit jammed the gun in Denton's back, swung him around by the shoulder and knocked the phone from his hand.  Denton was a large, powerfully built man, but when he realized what was happening he too raised his hands.  The shorter of the two men handed Denton a large cloth sack and told him empty the till into the sack.  He then ordered the cashier to open a vault in the east part of the lobby.  At the time that vault was empty and locked because it was being used by the receiver of the defunct St. Paul State Bank [1].   Denton convinced the two that he couldn't open that vault because he didn't have the combination.

Then they turned their attention to the main vault at the west end of the bank room.  It had been opened that morning and Mrs. Denton had turned the combination so it could not be locked.  Denton stalled at opening a safe within that vault but the gunmen threatened him and he finally opened it.   $2,600 was taken from that safe plus about $500 from till.  All of the cash was put into what appeared to be a 25 pound flour or sugar sack.   After getting that big haul the men left the main vault and returned to the receiver's vault in another unsuccessful attempt to open it.   At this point they began to get nervous.  One of the men left the bank and drove the car to the east entrance while the other forced the three employees into the main vault.  Unable to lock the door, Denton's desk was pushed against the vault door and the second gunman fled.  When the bank employees heard the door close, they shoved the vault door open, and Denton grabbed a high-powered rifle he kept in the bank. 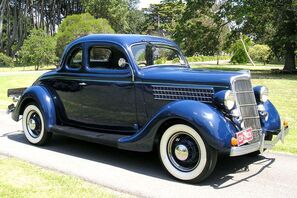 1935 Ford V8 Coupe [2]
​It was then that Fielding Hopkins heard the V8 engine revving and saw a man running to enter the car.  He knew the bank had been robbed!  Denton joined Hopkins and they started after the bandits.  Denton said their lead could not have been more that a few hundred yards.  They followed the men to Kimball, one mile east and several north of town.  Men at an elevator there said a car answering the description of the get-away vehicle sped through Kimball.  It was apparent from marks in the gravel, two miles southeast of Odense, that the robbers had turned north at a high rate of speed but no other signs of them could be found.   Hopkins called the Sheriff Roy Wiggin's office from Odense.  The sheriff had already been called and was trying to find the robbers, but to no avail.

As things settled down, it became apparent that the men were fairly well organized and didn't want to commit any violence.  Mrs. Denton recalled that one of the men told her he "was sorry" that he had to put the three employees in the vault.  The large amount of cash on hand at the time of the holdup was due to three factors:  payment of wheat checks; bonus checks; and dividend checks on the old St. Paul State bank.  All of this was being handled at the Exchange.  (Note:  Adjusted for inflation, the $3,100 stolen in 1836, would be worth about $58,036 today.) [3]

Further investigation revealed that the two men had camped in the Neosho River bottoms south and east of St. Paul the night before.  Several officers, including Sheriff Wiggins, Deputy Sheriff Hal Doak and Police Chief Bill Miller from Parsons, the St. Paul Marshall and Highway Patrolman Victor H. Anderson joined a farmer in the vicinity of the camp and found two Missouri tags which the farmer believed the men removed from the car early that morning.  The farmer saw the men working around the car at around 9:00 a.m. and they left.  Officers were certain they were the men who robbed the bank a few minutes later.  ​ Apparently the men had executed a will-planned robbery and made a clean getaway — or did they?   [ See Note 4, Below.]
The Parsons Sun Articles.  The four main parts of the front page story, including a spillover column, are below.  The front-page image at left shows colored keys to the four parts at the right (below on a phone).  All, including the front page, can be opened in a new window  They are in JPEG format and might take a moment to load.
Some Reference Information:
​​1.  The St. Paul State Bank failed and closed it's doors on November 1, 1931 and was passed to the authority of the Kansas State Banking Commission.   A. J. Hopkins was appointed as receiver with T.F. Morrison as Attorney.  After Mr. Hopkins' death in December of 1931, Ray Grillot served as receiver for a time, then L. A. Smith closed the business. (Source, History of Neosho County, Volume 2, page 911, W.W. Graves, 1951.)

2.  Two newspaper accounts of the robbery report slightly different amounts stolen.  The article above says $3.100.  A July 9, 1931 Journal article says $2,943.  Adjusted for inflation the robbery netted about $55,000 to $58,000. The loss was covered by the National Surety Corporation about two weeks after the robbery.

3.  The photo of the 1935 Ford V8 coupe is from an internet auction advertisement. (Shannon's Auctions, Australia).  The articles were not specific about whether the get-away car was a coupe or sedan.

4.  St. Paul Journal, June 2, 1938, via source below:  "The FBI in Kansas City announced last Friday they had received confessions from two men in the robberies of 12 banks in Kansas, Missouri and Nebraska over the ​last four years.  The two men were Ernest H. McCarthy, 30, Kansas City, Missouri and Harry Henry Korte, 33, Kansas City, Kansas.  Their confessions included the robber of the Exchange State Bank in St. Paul on July 7, 1936.  The two bought automobiles, lived handsomely, gambled extensively, and had secured an airplane to preview areas before bank heists.  They led authorities to some woods near Lone Jack, Missouri, where they had buried a pickle jar two feet under ground between two slabs of rock.  In this jar authorities found $42,100 of the bonds taken in the Denison, Kansas Bank Robbery."  (Current value about $772,000.) — Source: David O'Bryan's "Annals of St. Paul:  The Swan Song for the St.  Paul Journal - July 2, 1936 - November 16, 1961".   Profits from the sale of this book go toward scholarships for St.  Paul students.

5.  Having a pursuit originate from in front of the Journal office seems appropriate.  That is the same office where W.W. Graves published the Anti-Horse Thief Association Weekly newspaper for more than 30 years.