The Sodality Windows
The Ascension and Assumption windows, that flank the main Altar, are the most artistic and intricate in the church, consisting of both stained and painted glass.  We do not know the actual cost but, at approximately 5' (W) x 9'2" (H), they were likely the most expensive.  They were donated to the church by groups instead of by individuals or families. 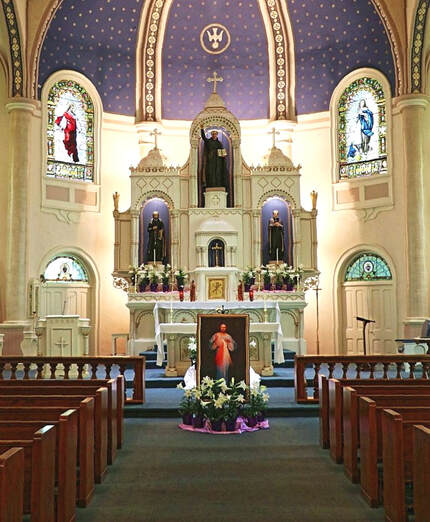 Present-day photo of the church showing the Ascension Widow (Left) and Assumption Window (Right)
March 22, 1900 St. Paul Journal — "Quite a number of strangers were seen Sunday inspecting the beautiful stained glass window.  Few churches in Kansas can compare with St. Francis now.  The windows add a richness and a heavenly beauty that makes you feel that you are in a sacred place.  The two large widows over the main altar are not in yet.  One will represent the Ascension of our Lord and the other will be a reproduction on Murillo's famous Assumption.  They are donated by the Married Men and Ladies and the Young Men and Ladies' Sodalities." [1]

A Sodality is an organized society or fellowship specifically, a devotional or charitable association of Roman Catholic laity.  In the early 1900's the Sodalities were an important part of church life at Saint Francis and quite a few parishioners participated in Sodality meetings and activities.  When donations were solicited for windows, Sodalities stepped up.   Lists of the sodality members, that we have been able to find, are shown with their windows, below. 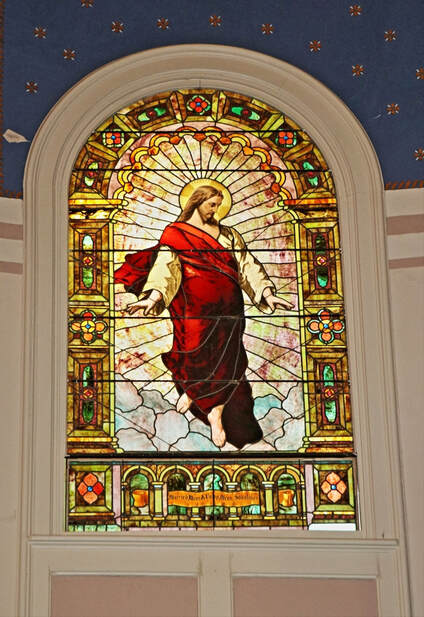 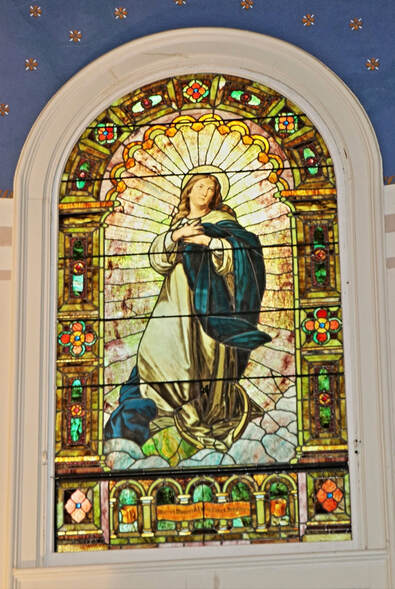 The Assumption Window Banner
Some Reference Information:
1.  We believe, based on the actual window inscriptions, that the last sentence of the paragraph should read:  "They are donated by the Married Men and Young Men's and Married Women's and Young Ladies Sodalities."

2.  The information above was drawn from a draft of Randy Dunavan's upcoming book "Who's Behind the Window."  The story and family names are only a sample of the names, news stories and other information contained in the 800+ draft.  Collectively, the story of the people and families behind the St. Francis church windows is a story of the early settlers of Neosho County and Southeast Kansas.  It is a Who's Who of our region.  In addition to the windows, he also discusses the migration of Catholic families from the northeast United States through Kentucky and other areas as they came to Kansas.  Who's Behind the Window will be a treasure trove for genealogists and Catholic history scholars or enthusiasts.

3.  All of the photos on this page were taken by R. Brogan of A Catholic Mission.org.