​The Great American Desert.
To the white man’s government this wasteland had only one purpose.  It might provide a solution to the Indian problem.  For many of us today, it is our home.
At the turn of the 19th century the vast open expanse west of the Iowa-Missouri-Arkansas border was called the Great American Desert.  At that time the western boundary of those states was the border of the settled United States and the end of law and order.   To the easterner the land between the border and the summit of the Rocky Mountains appeared to be arid grassland devoid of life and merit.  It was a no-man’s-land.

​The boundary definition of the Great American Desert varied but it was generally considered to be current-day Texas, Indian Territory (Oklahoma), Kansas, Nebraska and parts of South Dakota and eastern Colorado.   Later, much of the entire region would be Indian Territory – at least for a few years.  To the few white men who had entered the area the landscape was tallgrass, as high as the saddle on a horse, which undulated like sand on desert dunes.  Trees were few except for minor groves along the side of streams which were few and far between.  The lush hardwood groves we take for granted today were not here.  It was a land that seemed, to some, incapable of supporting agriculture and civilization.  When Zebulon Pike made his historic crossing of the prairie in 1806 he did take note of the beauty of the prairie and abundant wildlife.  But in summary he reported: 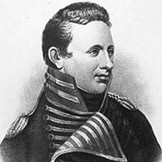 Zebulon Pike
​“From these immense prairies may arise one great advantage to the United States, viz: The restriction of our population to some certain limits, and thereby a continuation of the Union. Our citizens being so prone to rambling and extending themselves on the frontier will through necessity be constrained to limit their extent to the west to the borders of the Missouri and Mississippi, while they leave the prairies incapable of cultivation to the wandering and uncivilized aborigines of the country."
To the white man’s government this wasteland had only one purpose.  It might provide a solution to the Indian problem because no white man would covet this forbidding place.

However, the bands of Indians that already occupied the space had a different perception of the prairie.  They had lived, hunted and prospered here.  It was true that the land was generally devoid of trees.  But there was timber along the streams and rivers and small but dense forests around the junctures of these streams.  The landscape was, indeed, capable of supporting agriculture.  The prairie ecosystem, including seasonal decay and fire cycles was fertile—the river and creek bottom land was richly fertile.  As Pike noted there was abundant wildlife.  There was also a natural infrastructure of major waterways, such as the Arkansas, Verdigris, Neosho Rivers, and their tributaries, that were rich with timber and fur-bearing wildlife.
​
Among the Native Americans who entered current-day Kansas were the Osage.   During the 18th and early 19th Century most of the Great and Little Osage still occupied central Missouri and northern Arkansas.  But as early as the 1790’s small bands of Osage from Arkansas migrated to the Verdigris.  Others from Missouri had hunted the Neosho and Marmaton River Valleys.  Here they found a hunter’s paradise of fur-bearing game and good crop bearing land.  This, combined with huge prairie bison herds held special meaning for the Osage.  They had built a strong friendship and trade relationship with the French fur traders.  In addition to being skilled hunters they had become shrewd negotiators and businessmen.  The desert might provide business.  Later, when the Indian Removal Act of 1830 was signed into law, many tribes were pushed onto the prairie, often under military force.  The mighty Osage and their French associates had already started their move by choice and through negotiation.
Some Reference Information:
Top Photo of Flint Hills Grassland – The Billings Lab, The University of Kansas.   http://billingslab.faculty.ku.edu/

The Zebulon Pike photo is on many internet sources.  This copy is from the Weebly.com copyright free database.

Some the many on-line sources for the Great American Desert and the Indian Removal Act: