12. Transitions (1888 - 1895).
​“Within the brief compass of six years, 1890 to 1896, much that was historic in southern Kansas had passed away.  Its oldest educational institutions, St. Francis and St. Ann’s had ceased to exist.  With their discontinuance two pioneering religious communities the Society of Jesus and the Sisters of Loretto moved away.”
—Sister Mary Paul Fitzgerald – Beacon on the Plains
​When W.W. Graves entered St. Francis Institute in the fall of 1889 the school’s days were numbered.  The Jesuits were dealing with the same issues facing many of today’s school administrators—money, resources and consolidation.   There were two Jesuit boy’s schools in Kansas, one in Osage Mission and the other at St. Mary’s, 130 miles north.   Jesuit scholastics were stretched thin.  St. Francis Institution held a debt of $27,000 and recurring droughts had reduced the value of the fifteen hundred acre farm.  In 1888 the Jesuits received word from superiors that consolidation was pending.  In 1891 the decision was made to discontinue operations at St. Francis Institute.  When young Mr. William Whites Graves graduated from St. Francis Institute in the spring of that year the school closed and consolidated with St. Mary’s.  In August of 1892 the Jesuits left Osage Mission and turned the church and property over to the Most Reverend Bishop Fink of Leavenworth.  The church was placed in the hands of two secular priests for about two years.
​As early as 1881 there was interest in changing the name of Osage Mission.  Some businessmen did not believe it reflected the image of a growing community.  In 1883 the City Council voted to change the name to Neona to honor the daughter of Chief Little Bear.  A bill passed the house but failed because of local protest.  In 1895 a petition was filed in district court to change the name of the town to St. Paul.  An election was called among stiff protests from citizens.   The non-Catholic editor of the Osage Mission Journal considered the proposal to be an insult to the founding Jesuit and Loretto missionaries. 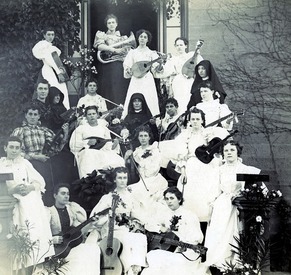 The Bijou Club presented its final Osage Mission concert on July 26, 1895.
By the start of the fall semester of 1895 St. Ann’s Academy was flourishing.  The school and its students had become a part of the community and the community responded with support and affection.  In the words of Sister Fitzgerald in “Beacon on the Plains:  “The schools were something of a mecca in the social life of the people.  Musicales, art exhibitions, and commencement exercises drew larger crowds than the halls could accommodate in the days when entertainment was an art and not a commercial enterprise.”
​
On June 26 the Academy’s Bijou Club would present its final Osage Mission Concert.  On July 1, 1895 the name of Osage Mission was formally changed to St. Paul.  On September 3 of 1895 a fire caused by a defective flue destroyed the St. Ann’s Academy Complex.
​Out of protest, the disgusted editor of the Journal changed the name of his newspaper paper back to an earlier name Neosho County Journal and it would be several years before it would carry the name of St. Paul. ​[1], [2]
​
Within the brief compass of six years, 1890 to 1896, much that was historic in southern Kansas had passed away— but even today scholars and historians continue to study the Mission and its effect on the settlement of the region.  And much more happened after 1895! 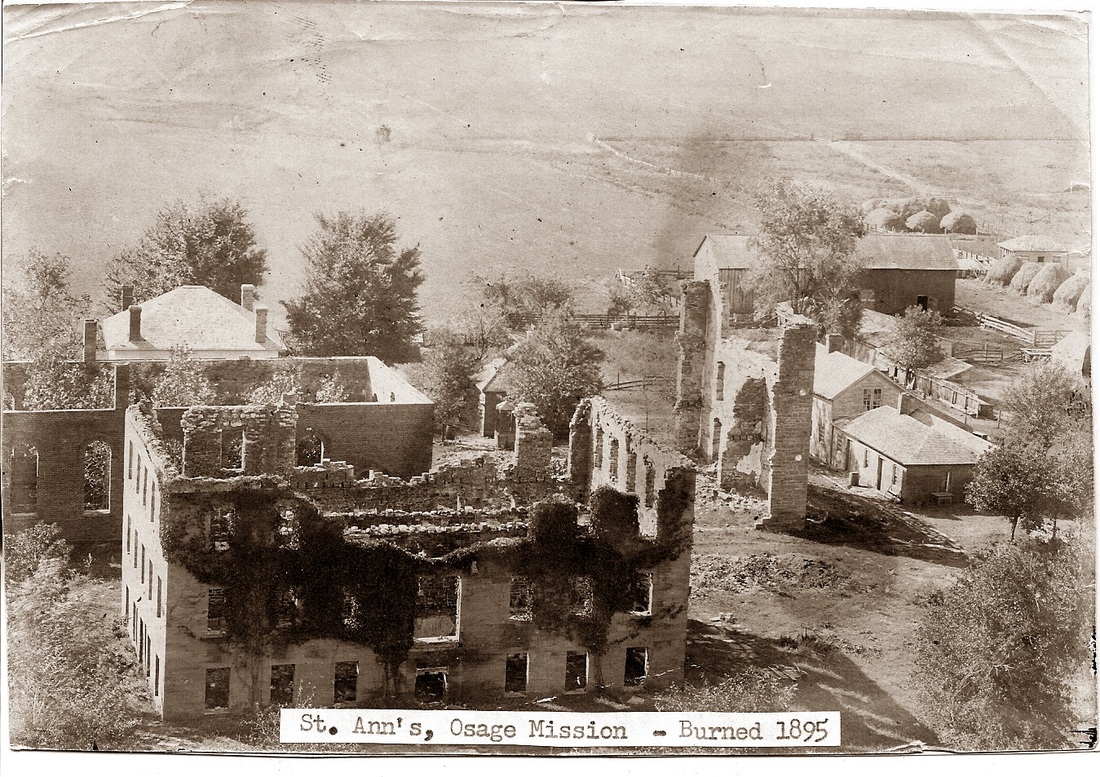 This photo of the St. Ann's Academy ruins was probably taken from the church tower. Using current landmarks, the main building (foreground) sat just in front of, and a little west of the existing museum building.
The Silver lining for that period was the arrival of the Passionists.
Go to:  13.  The Passionist Era Begins Amidst Promise, Doubt and Turmoil  - or -  Story 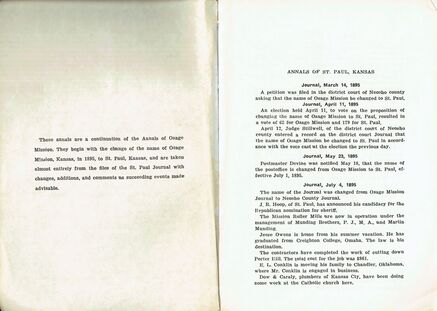 The opening pages of the Annals of St. Paul summarize the change including selected articles from the Osage Mission book.  Click on the illustration to enlarge.
The Annals series of books provide excerpts from one of the longest, continuous running pioneer newspapers of Kansas.  The Annals of Osage Mission captures our earliest days.  David O'Bryan's The Annals of St. Paul: The Swan Song for the St.  Paul Journal captures the later days from July 2, 1936 through the Journal's closing on November 16, 1961.  The interim period from July, 1895 through July, 1936 is covered by Graves' large Annals of St. Paul (including a supplement).  The first and last installments are available in print.  Unfortunately the main body of Graves Annals of St. Paul is unavailable for sale and many remaining copies, like ours, are in poor condition.   Restoration and reprinting (digitization?) of this intermediate volume would be an important project for a historical society. ​
​2.  The decision to change the name of our town was controversial around the region as well as in St. Paul.  During the weeks following the change area newspaper editors responded with criticism and outright sarcasm:

The Girard Press, July 25, 1895:  "The name of the Osage Mission Journal was recently changed to The Neosho County Journal, and the date line from Osage Mission to St. Paul.  We have heard of no wonderful boom in our neighboring city on account of the change of name that residents imagined would help them so much."

​The Thayer News, July 26, 1895:  "Osage Mission is having much trouble getting mail and express since the name has been changed.  Of course we would not think of telling it abroad, but it is our private opinion that changing the name of as old a town as Osage Mission is a downright, foolish trick and dollars to doughnuts more than half of the people in the new St. Paul will agree with us."

The Walnut Eagle, July 27, 1895:  "Osage Mission has been officially changed to St. Paul, and the Osage Mission Journal has changed back to its old name, the Neosho County Journal, but the anticipated boom has not come, and there is but one, and only one, St. Paul in this country."
​

​3.  Other References:Historical information came from several sources including: