​19.  The John and Bridget McCarthy Window.
​The McCarthy window is the most noticeable and unusual in the church.  As noted above, it was almost overlooked as a donor window.   Sadly, that seems to reflect what we have been able to learn about Bridget and John.   Unlike some other donors, they didn't leave a lot of tracks during their time in western Crawford County and Osage Mission - St. Paul.   There is a fairly prominent tombstone in St. Francis Cemetery with an apparent inscription error and there is a missing obituary.  Even after their deaths, their small family seems to carry on with an air of gloom.
John B. McCarthy's (1832-1917) time before Kansas is sketchy.  The 1860 census places 28 year-old John in LaSalle County Illinois in the boarding house of Bridget Fogarty and her daughter Ellen.  According to record, there were seven other Irish-born laborers in the house.  While not certain, construction of the Illinois and Michigan Canal and some railroads brought hundreds of Irish Catholic Immigrants to the area.   So many, in fact, that they formed the Church of St. Peter and St. Paul that operated as a roving home-to-home church until a structure was built in 1869, just northwest of Troy.

Bridget Hackett (1840 -1905) was born in County Killarney Ireland in in 1840.  She came to the Illinois in 1865 and it was there that she married John McCarthy.  The LaSalle County marriage records reveals that she married John on February 23, 1865.  The exact church is unknown but proximities suggest St. Columba Catholic Church of Ottawa, Illinois.  St. Columba, established in 1838, is the oldest church in the Diocese of Peoria.

John and Bridget came to Osage Mission in 1867, after a brief stay in Topeka.  They settled on a farm east of the Mission in Grant Township. Crawford County.  The McCarthy's did not have children but raised a nephew James McKinney through manhood and into marriage.  It is a mystery who James McKinney's parents were.  By 1875 Kate Milroy, age 4, was living with the couple and in the 1880 census Kate is now Kate McCarthy - but no other family connections are found.  The 1880 census also shows that there was also James McCarthy, 3 and George McCarthy, age 1 all born in Kansas.  Did John have a brother?

Newspaper accounts of February 1900 list the generous donors of window for St. Francis Church and John McCarthy is listed.  It was also noted that John and Bridget McCarthy were members of the Married Men and Women Sodality at St. Francis. [2]   In the 1900 census John McCarthy is shown as 66 and Bridget was 56.  James McCarthy was 24 and still in the household and they have a farmhand, Edward Redmond, age 16.   In about a year they would add another family member.   On November 19, 1901, nephew James McKinney of East Mission and Mary Catherine Westhoff of Crawford County were married in Greenbush by Father F.M. Verdan.​  [3]  James and Mary Westhoff McKinney became part of the McCarthy Household.

On January 31, 1905, Bridget McCarthy died of cancer.  Her obituary acknowledged she and John were among the very earliest settlers in the locality.  She was buried in St. Francis Catholic Cemetery.

By 1910. James McKinney, 36,  was listed as the head of household of John McCarthy's homeplace.  At the time McKinney and Mary Westhoff had four children and John was 77 years of age.  In 1915 the McKinney family had grown to nine and John was then 84 and his days were numbered. 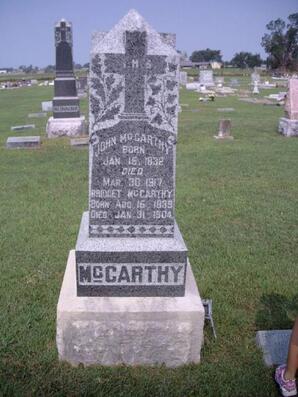 McCarthy Gravestone in St. Francis Cemetery, St. Paul. (Source Findagrave.com)
​There is no known obituary for John McCarthy.  The tombstone, in Block K of St. Francis lists his date of death as March 3, 1917.  He was 85 years old.  He had spent much of his time in Grant Township, Crawford County.  Who really knew his story?   It is noted that the date of death for Bridget, on the same tombstone, says January 31, 1904 — she died on January 31, 1905.

The McKinney Family remained on the McCarthy farm after John's death.  The nine children grew up very poor and had a hard life.  It was said the kids shared a single mule to ride to school, taking turns.  James had a reputation for being a difficult man from drink and a bad temper.  His wife, Mary Catherine was known as a good and sweet woman.  When the great depression hit, it appears that James lost the family farm.  James and Mary Catherine were divorced.  She passed away on November 3, 1942.  James McKinney died in May of 1963. 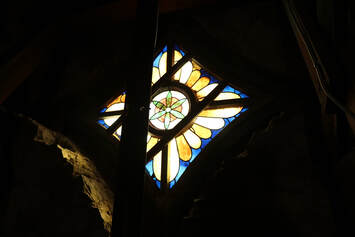 1.  The tower diamond window is above the McCarthy window and smaller.  We have seen it from the outside so much we probably don't even notice it.  But it is, in its own right, a beautiful piece of glass.  It is shown here as relatively few people see it, from inside of the bell tower.  It was not one of the donor windows.  (Photo - R. Brogan)

2.  Two Sodality groups donated windows that are not included with the individually named windows.  Those two windows, while smaller, are among the most artistically stunning windows in the church.   The Sodality windows that flank the main Altar is covered separately and includes a lot of old St. Paul names.

​3.  The McCarthy's Who's Behind the Window? section of the manuscript is not as long as some.   The McCarthy research trail was extensive, but they seemed to live a simple rural life.  However, anyone doing research on any of the many McCarthy's who immigrated from Ireland might well find a link in the manuscript.  Randy chased a lot of folks with the McCarthy and other Irish surnames to dead ends but those might well be starting points for others.  There are many mentions of both Neosho County and Walnut-area Westhoff's in the manuscript.  As with each of the window family profiles, the above is a snapshot of a much larger body of information.

For those interested in digging into the McCarthy story, or stories of the other St. Francis donors, contact the author of Who's Behind the Window? Directly.  Randy Dunavan's email address is:  ​randydunavan@cablelynx.com