Close your eyes for a moment and imagine four young, refined, well-educated women climbing down from a wagon in the middle of an uncivilized prairie. Surrounding them was a group of imposing, sparsely-clad Osage who, while appreciative, were curious about their new neighbors. Now, you might be able to appreciate the apprehension, fear and excitement the initial group of Loretto missionary sisters felt. 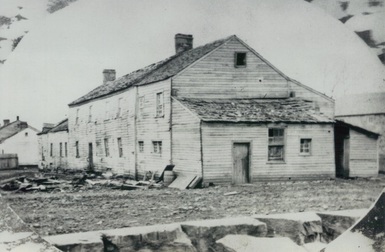 Within hours of arriving at the Catholic Mission, the Loretto Sisters opened the Osage Manual Labor School for Girls.
What The Site Is and Is Not:
This site is an introduction to the Catholic Mission story. I hope I can tell the story in a manner that will stimulate people’s curiosity. As you work your way through the site I have provided "Some Reference Information" at the bottom of most pages.  Some of these sections include book references,  links to related web sites or information about illustration sources or design.  Those who want to carry on personal research can start there.

This site is a personal effort assembled by my wife and I with help from some friends.  It is our hope that the site will educate and entertain those who are interested in the fascinating Osage Mission, St. Paul, Neosho County stories.

This is not a religious website. We intend to provide information about stories, characters and places across our region—in many cases they are tied to the Catholic Osage Mission. In other cases they are not.  But having said that, it is impossible to overstate the impact the Osages, the Catholic Mission and the Jesuit and Loretto missionaries had on the history of Kansas:

The apostolate of the Jesuits in southern Kansas was essentially that of missionary. French Jesuit Father Michael Ledrus defined this as “Planteur de l’Eglise”—i.e. planters not proprietors. Their role here was to make the Catholic Church at home in the territory south of the Santa Fe Trail; to plant stations and churches in the area and leave their care to secular priests. They were very successful especially considering their range included five states.

Close your eyes for a moment and imagine four young, refined, well-educated women climbing down from a wagon in the middle of an uncivilized prairie. Surrounding them was a group of imposing, sparsely-clad Osage who, while appreciative, were curious about their new neighbors. Now, you might be able to appreciate the apprehension, fear and excitement the initial group of Loretto missionary sisters felt. Yet within hours of their arrival they opened the Osage Manual Labor School for Girls. They served as an underlying force that kept the Mission successful, a source of balance that helped it survive a war and the ingenuity and resourcefulness to seed a very long-term education system.

We owe the Osage and our Jesuit and Loretto missionaries much more than historical obscurity; and hopefully, by now, you have a better understanding of what this site “is about.”

​Site Layout:
At times I wonder why no screenplay? If you do not understand the story you are probably thinking that’s a little ambitious or even nuts. But when you look at events from about 1810 through the early 20th century our local story is very compelling. It includes Native Americans, earliest settlers, trading posts, immigrant hero’s, sacrifice, war, scoundrels, saints, miracles, main-street shootings, lynching’s, railroad battles, a powerful volunteer detective agency and countless other stories with characters. It’s kind of like Lonesome Dove, High Plains Drifter, Shenandoah and Lilies of the Field, all rolled up together. And the story is supported by an incredible cast of characters.

With that in mind, this is how the site is structured: There is also a “Links” page. This page includes categorized links to other pages of interest; and a list of reference sources for folks who want dig in further. Think of it as a bibliography. I intend for this page to grow over time.

Recently we added "Thoughts and Things."  This is a collection of short articles and personal thoughts or opinions about our regional history.  It is informal and presented in blog format, but without comments (for the time being).

Viewing Format
The site is responsive to most devices.  Viewing on a desktop monitor provides full visual functionality including background scrolling.  Our Samsung tablet displays nearly the same as our desktop, but without scrolling—others might scroll.  If viewing on a phone, landscape orientation is usually best.

About the Webmaster:
I am not a historian. I enjoy history but my background was in aerospace and defense. In later years I worked in business development and proposal management, including a few years as a consultant. People like me studied customers, competitors, products and differences. The purpose was to define features and discriminators that made our products better, or at least different in the eyes of our customers. Our systems were incredibly complex consisting of aircraft, simulators, courseware, logistics and business systems it took to deploy a flight training system. The biggest challenge was to distill thousands of parts and millions of lines of code into something that could be described — briefly.   A government technical proposal is often limited to 100 pages. In the world of museum displays this distillation process is called interpretation—squeezing large amounts of information into comprehensible displays.  With this site we have tried to distill a big story into a series of brief articles.

Before we moved back to St. Paul in 2008 I knew there was a lot of history here and I sensed awareness was fading. As I started to study, with the assistance of two very knowledgeable historians, I was amazed.  At times they seemed amazed.  The story of our region is full of discriminators that apply to us, and only us. The history that emanates from the Catholic Osage Mission and St. Paul Kansas has the power to stimulate cultural awareness, community pride and the area’s economy. If you have visited places like Council Grove, Kansas, Larned, Kansas, or Arrow Rock, Missouri, you can "feel the history." Cultural awareness attracts interest in a community and even new residents. Also, considering the tentative nature of current-day politics; it also provides a force to protect a long-lasting rural school system and our church. In the days before a historical society was formed the “city fathers” of St. Paul held the keys to our story and promoted it (See Note below). They knew our story was the heart and soul of the community!

We honestly believe that St. Paul could be a national historic site. We hope to substantiate that belief with this website. But the people of St. Paul, as a team, must get involved. When a community entrusts its treasure to its oldest citizens, like us, the results are always temporary.

Follow this link and "Like" our Facebook page for website updates and other information.   Facebook @CatholicOsageMission.
Some Reference Information:
Sister Lilliana Owens, PhD, was a well-respected Loretto historian and writer.  She was also a St. Paul Native.  In our centennial year of 1947, she wrote about St. Paul as one of the most interesting spots in Kansas.  Her paper, published in the Kansas Historical Quarterly, is linked here:  https://www.kshs.org/p/kansas-historical-quarterly-the-early-work-of-the-lorettines-in-southeastern-kansas/1306​

​Note:  The term "city fathers" has a different connotation than it did in the 1930's through the 1980's.  Today, people tend to think of our city government as the fathers.   In earlier days, before things like Walmart, St. Paul was much more self-sufficient.  We had several grocery stores, a hardware store, a clothing and mercantile store, a creamery, a TV and appliance repair shop, three or more cafes or restaurants, harness shops, car dealers, banks, etc.  These firms were managed by local businessmen who had real "skin in the game."  They knew that in order for them to be successful St. Paul, as a community, had to be successful.  With the knowledge and influence of the Graves-Hopkins families they understood that our heritage was one of St. Paul's most valuable resources.