​3. Earliest Commerce in Southeast Kansas
The Chouteau's and their fur company followed the Osage into southeast Kansas and opened trading posts in present-day Neosho and Labette Counties—others followed.  One of the Chouteau posts was sold and later became a center of hostility during the war.  All four of the businesses discussed here were among the earliest business in Kansas; and all four took a prominent place in regional history.

The earliest trading posts in our region were not grocery stores or markets with any similarity to today’s retail businesses.  Their purpose was to acquire furs from the Indians in trade for goods that were brought in from St. Louis and other eastern locations.  The trade goods included food, blades, tobacco, coffee, weapons and gunpowder, bridles and other items the Indians needed; and then the furs were shipped east.

These businesses were remote and crude.  There was very sparse settlement of this region during the early part of the 19th century; and after the 1825 treaty was ratified, the only white people allowed on the Osage reserve were a few traders, builders, agents and missionaries approved by the government.  The proprietors were tough, resilient people who dealt with harsh frontier elements as well as loneliness.  The structures themselves were poorly lighted by candles and lanterns.  The constant presence of freshly killed animal hides did little to improve the environment.

All of the posts are gone.   Nature, cultivation and more recent construction have erased most signs of their presence.  But we do know a little about a couple of the structures.  Descriptions of the Mathew’s post and the Linn-Gilmore posts are available and similar.  This is not surprising because the men knew one another and might have been partners at one time.   The structures were dog-trot cabins which were pretty commonly used across the southern United States during the 19th and early 20th century.  The buildings consisted of two enclosed areas separated by an open breezeway, or dog-trot.  The enclosed ends could be used for cooking or sleeping quarters and could be heated separately—or only one end had to be heated for cooking during warm weather.  The dog-trot breezeway provided comfort in the summer.  Overall size might have been 20’ x 50’.

Early Osage villages and trading posts along the Neosho River. (click to enlarge) 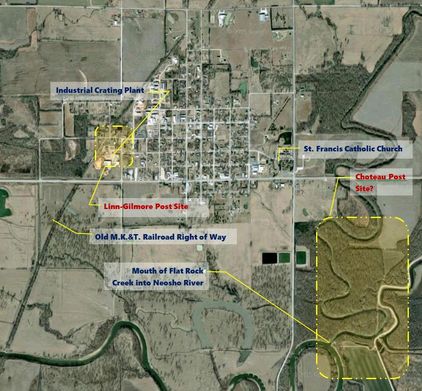 Approximate Locations of Two Trading Posts Near St. Paul. (Click to enlarge). Also see Note [3], below.
Chouteau Post.
In 1837 Edouard Chouteau and Gerald Pappin opened trading posts along the Neosho in southern Kansas.  The Chouteau and Pappin families became good friends of the Osage Mission missionaries and the names Chouteau and Pappin appear often in Jesuit writing and the records of St. Francis Catholic Church.
​
The Chouteau post was located on the banks of Flat Rock Creek southeast of the Catholic Mission.  The exact location is unknown and given the area's propensity to flood it is doubtful that anything remains.  But, if a hunter or hiker stumbled across the remains of a rough stone foundation it would be a very interesting discovery.  There are a few references to a Chouteau post on the southern Kansas Neosho River as early as 1815 but I have not been able to substantiate it (unless it is the Chouteau - Mathews post near Oswego discussed below). 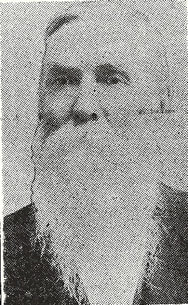 James M. Linn
​Linn – Gilmore Post.
James Monroe Linn was the first trader known to have a business within the present boundaries of St. Paul, Kansas. Linn began doing business with the Osage in this area in about 1841 and learned to speak their language fluently. He established a trading post about one mile west of the Catholic Osage Mission in or before 1849.  The exact location is unknown but it is believed to be near the existing Industrial Crating Plant in the east part of Catholic Mission addition of St. Paul (click on the above image). The post was described as a long building with a counter over five feet high, behind which fur and buffalo robes were thrown when a trade was made.  The family home was a double log house with an open passage that stood in the center of an enclosure of a ten rail fence.  Linn has been described as friendly man who got along well with the Indians but there are a few tales of tomahawk throwing and angry chases within the fenced enclosure; one of which Linn ended by brandishing a pitchfork to chase an angry Osage away.  When Linn’s young wife grew tired of the stresses of the remote frontier he turned the business over to one of his clerks, Samuel Gilmore.  in 1858 Mr. and Mrs. Linn moved to the bustling settlement of Carthage that had a population of 300 at that time.

After Sam Gilmore became proprietor, a settlement began to spring up.  Gilmore became postmaster[1] and his building, again described as a closed in dog-trot building[2], became known as “Castle Thunder” reflecting some of the wild evenings local cowboys enjoyed at the boarding house-tavern.  Other businesses around the Castle included stores, a small furniture factory, a newspaper and homes.  The settlement took on the name of Gilmore Town. When Father Schoenmakers began laying out the streets of Osage Mission Town, Gilmore knew his good friend’s new town would over-ride his settlement and he sold out in 1868.  Sam Gilmore died here in 1871 and his Castle Thunder was torn down during the same year[3].

John Mathews Post.
John Mathews was born in Kentucky in 1809.  At sixteen years of age he moved to west-central Missouri where he lived among the Osage.  In about 1838 he moved to the banks of the Neosho at Little Town, present day Oswego. Mathews is credited as being Oswego’s founder.   It is recorded that in about 1840 he purchased the trading post of Augustus Chouteau and operated the business as a blacksmith – gunsmith shop and trading post.

John Mathews is believed to have had both Indian and white wives and some of his children attended school at Osage Mission.  He was also a slaveholder and a southern sympathizer.  During the Civil war he became a prominent confederate guerrilla leader.  In 1861, Cherokee half-breed Colonel Stand Watie and Mathews participated in a raid on Humboldt that ultimately led to his end.  In the following months Union forces from Fort Scott pursued him relentlessly.  He was caught and shot to death near Chetopa.  After his death, his home and business was burned. It is noted that John Mathews grandson, John Joseph Mathews, a mixed blood Osage, became a well-respected Osage historian, writer and activist.

Canville Post.
Canville Trading Post is the most historic in Neosho County.  Its main distinction is that it was the site of the final signing of the Treaty of 1865 whereby the Osages ceded land in Neosho and Labette Counties opening that land for white settlement.  This was a precursor to the removal of the Osage to Oklahoma a few years later.

The post was founded in 1847 by A.B. Canville, a Frenchman who had been among the Osages since 1844 as a sub-agent.  He also married an Osage woman.  The location of his post is described as “on the south side of the Santa Fe railroad track about a quarter of a mile southeast of Shaw” (W.W. Graves in History of Neosho County).  He did a good business among the Osage and many of the others who traveled to the area to trade with him.  The post is described as three log houses about 25” x 40” that were very well built to provide fortification against attacks. In June of 1866 a Canville post office was established and a small settlement was formed.
​
Canville continued his business there until after the Osage moved into present Oklahoma, then he moved there too.  He passed away in July of 1878.
Go to:  4.  Earliest Protestant Missions - or -  Story.
Some Reference Information:
​  * These books are available from the Osage Mission - Neosho County Historical Society.  Last known price   was $16 each ($32 for both of the Neosho County books).  I believe they are also available at the Graves Memorial Public Library in St. Paul.

Note [2] - From written descriptions, the Castle Thunder building likely started as a traditional "dog trot" structure with the central breezeway.  Later the breezeway was built in to add enclosed floor space.  During it's life the Castle Thunder building served several roles including trading post, inn, tavern for local traders, settlers and cowboys.  It also served as a post office, Gilmore Town meeting room, and courtroom.  The name Castle Thunder reflects some of the good times that were had when the building was in the tavern mode.  The first known white child born in Neosho County, and the current limits of St. Paul, was born in Gilmore Town.  Ann Gilmore, Sam Gilmore's daughter, later married Peter Perrier and resided for a time at the Osage Indian Agency, Indian Territory (Oklahoma) 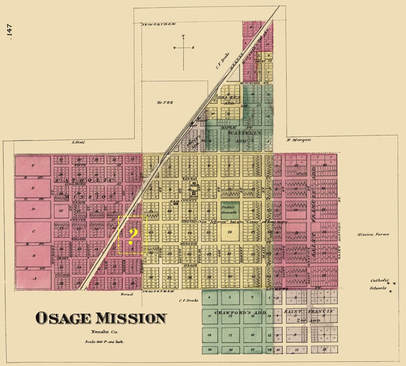 Educated Guess of Castle Thunder Location (Click)
[3] Where Was Castle Thunder?
As noted, Gilmore's Castle Thunder inn and trading post was torn down in 1871 and a lot has happened in the east edge of the Catholic Mission addition since then.  Physical evidence of its existence is long gone.  But there are some hints, some confusing, that put it close to, or on, the existing Industrial Crating grounds. From the above, it appears as though Castle Thunder was in the area south and west of the corner of Jefferson and Front Streets.  It would be presumptuous to assume the old post sat on the site of the existing Industrial Crating office but it was likely in that general area.   But remember — when the trading post was built, there were no streets or town.  The only thing between the Catholic Mission and Castle Thunder was about one mile of open prairie.