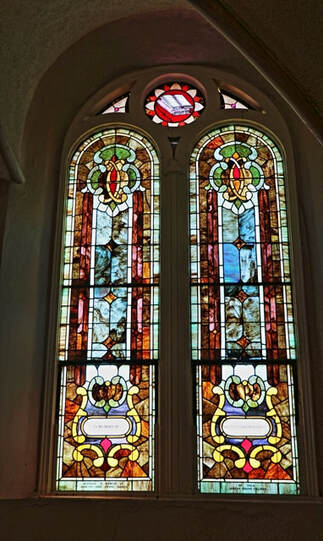 The Full 10 Foot x 7 inch Father Schoenmakers Memory Window. (Photo and Banner Photo - R. Brogan)
9. The 'In Memory of Rev. John Schoenmakers' Window.
The memory window for Father Schoenmakers is smaller than most of the others —  70 inches wide by 10 feet high.  It is located in the east choir loft near the main entrance to the bell tower.  When you consider the extraordinary impact he had on the Osage, the Mission, our Parish and the town of St. Paul, the size and position seem rather obscure.  But when, you turn around in the choir loft and look down, you remember this is his church!

Father John Schoenmakers died on July 28, 1883, ten months before his church's dedication.  The new stained glass windows were installed in 1900.  An article in the February 1, 1900, Journal says his window was donated by a friend.  Who?  We do not know.  Credit for this window is lost to history.  However, we do know from an inscription, at the base of the window, that it was restored in the memory of John and Jane O'Kane Farran by their Great Grandchildren.  We will focus the credit for the window on the Farrans.
Father John Schoenmakers.
Like all of the original Osage Mission Jesuit missionaries, Father John Schoenmakers was an immigrant.  He was born in a humble home in the village of Waspick, Langstaat, in the province of North Brabant, Holland. His father was Henry Schoenmakers, and his mother was Petronella Kam.  There was nothing about his youth that hinted he was bound to do great things.   After receiving a public education he entered the school of Charles De Neff in Turnhout, Belgium.  De Neff was an institution that groomed young men with missionary aspirations.  While he was at the De Neff school, he added his name to the list of other prominent De Neff graduates like Jesuit missionary Fathers Pierre-John de Smet and Charles Van Quickenborne.

But rather than being repetitive here, follow THIS LINK to our profile of Father John's life and accomplishments. That profile also includes information about another Schoenmakers window in Immaculate Conception Catholic Church in Pawhuska, Oklahoma — The Cathedral of the Osage.  However, it is noted that the manuscript of Who's Behind The Window? includes a great deal of detail more on the life and times of Father Schoenmakers.
The Farrans.
As noted above, we will focus on John and Jane O'Kane Farran.  But before we go on, we have hit another dead-end.  We know the Schoenmakers window was restored by their great grandchildren.  But we don't know exactly when.  What we do know is that some of the windows were removed and re-leaded during a major church repair and remodel in the 1974 - 1976 time frame.  Perhaps this web page will bring forth some more information.

On May 30th, 1864, the Farrans's arrived in New York City, from Ireland, on the ship Constantine.  The family ended up in Albany, New York in 1865, where oldest son Bernard married an Irish Lass named Katherine Tobin in about 1868.  Bernard and Katherine had five children, and remained in New York when their parents made their way to southeastern Kansas.

Anne Marie Farran Married John Joseph "J.J." Cavanaough at St. Mary's Church in Alban, New York, in 1865.  (It is interesting that Pvt. Cavanaough had just returned from service with the 123rd New York Volunteers, Company G, First Brigade, Firs Division, Twelfth Union Army Corps.  During his time in the Union Army he faced his own brother, Matthew, a Confederate, in battle).  Four years later, April 6th, 1869,  the Cavanaough's relocated to Fort Scott, Kansas.  Soon thereafter they settled a claim 2 miles east and 4 miles north of St. Francis Church at Osage Mission.  They raised a large family, including one girl that went to the convent, and a son that became a doctor.  Ann Marie and John were life-long members of St. Francis de Heironymo Catholic Church. 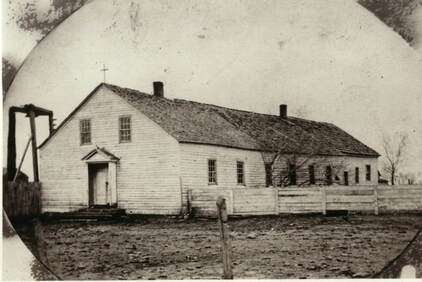 Mary Farran Married Dr. R.A. Brogan in the Original St. Francis Catholic Church in 1873. (Photo from the files of Osage Mission - Neosho County Historical Society)
Daughter Mary Teresa Farran married Doctor Robert A. Brogan [2]  on February 25, 1873.  The marriage was performed by Rev. Fr. Philip Colleton [1] in the original Osage Mission log church.  R.A. Brogan was the fifth of ten children of Irish immigrants Edward and Catherine Martin Brogan.  He was born in New York in 1842.   His early life was spent on the farm and he later engaged in teaching school, In 1869 he graduated from the St. Louis Medical College and moved to Osage Mission.  Here Here he opened a practice that included St. Ann's Academy and St. Francis Institute.  Dr. Brogan attended to Mother Bridget Hayden during here final days on earth.   Dr. Brogan also started a drug store that did a lively business.   Mary and Robert had six children.

​John and Jane Farran's youngest daughter, Ellen, received her teaching certificate on March 7th of 1870, at St, Ann's Academy, Osage Mission, Kansas.  The Lorettos must have left a favorable impression because on August 15th, 1871, Ellen, now known as Sister Mary Adelaide Farran, received her veil of the Sisters of Loretto at the Foot of the Cross. She took her final vows on September 8th, 1879 and began a teaching career that took here west.   Between 1885 and 1920, she taught at schools in Santa Fe, Taos, Mora Socorro and Bernalillo, New Mexico.  She passed away on August 16, 1920 and is interred at Rosario Cemetery in Santa Fe, New Mexico.  Her gravesite is very close to another Osage Mission connection. [3]