Peter & Susan Thines Bonifas. Shared by Iahmb
The majority of the Bonifas family remained in Ohio where they practiced the Catholic Faith.  While Peter Bonifas and Susan Thines were both in Ohio in 1870, soon thereafter they were married in Kansas City.  Peter's obituary indicates he came to Kansas in 1872.  In 1880, Peter and Susan were farming in Grant Township, Crawford County, Kansas, where they remained on their farm until at least 1886.  At some point later they settled on a farm just east of Osage Mission and he later engaged in an Osage Mission business partnering with Frank Menton.

In June of 1893 Rosa Catherine Bonifas, Peter and Susan's daughter, Rosa, graduated from Saint Ann's Academy.  Among her classmates were: Sadly in six years, Rosa passed away and is interred in St. Francis Cemetery, St. Paul.  By 1903 Peter and Susan were engaged in a restaurant business in Chanute but eventually returned to St. Paul to operate a bake shop.  Susan passed away in 1922 and Peter passed four years later.  They and children Rosa and Peter Alexander and Frank L. who are buried in St. Francis Cemetery.  Six remaining children are buried in Washington, Texas, Oklahoma and Frankford, Kansas.

Peter's younger brother, Jacob, is a bit of a mystery.  in 1880 he was 13 years old and still living with his parents in Jennings, Van Wert County, Ohio.  By 1887 he ventured to Kansas City were he was employed as a cooper. [1]  Eventually, Jacob, 32 years old, joined Peter's family in Mission Township in 1900.  Jacob seems to fade from most records but family members indicate his passing in 1917.   But he also had a church window named after him shortly after arriving at Mission Township. 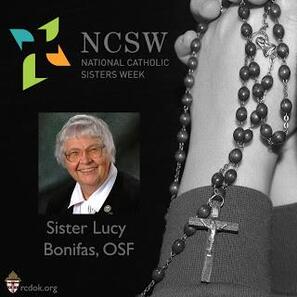 Sister Lucy Bonifas (https://owensborodiocese.org/2016/03/09/sister-lucy-bonifas-osf/)
A Religious Family.
As previously noted, the family of Peter Sr. and Margaret Bonifas were deeply religious and of the Roman Catholic faith.  The family produced a priest, Fr. Roger D. Bonifas (1920 to 2013) and Sister Lucy Bonifas.  Sister Lucy became a novice in 1955 and only recently retired in 2016.  She has led an interesting life as a seamstress, nurse, hospital worker and administrator.

The information shown here about, the Bonifas family and Sister Lucy, is distilled from an chapter in Randy Dunavan's book Who's Behind the Window. [2]  There is much more in the book.​