13. The Passionists Era Begins Amidst Promise, Doubt and Turmoil.
After the passing of two great religious orders—came another.
After the Jesuit departure, in 1892, St. Francis Catholic Church was served by two secular priests under the guidance of Bishop Fink of Leavenworth.   In April of 1893, a Passionist priest, Rev. Raymond O’Keefe C.P., traveled from St. Louis to St. Paul to give a retreat.    At the time the Passionist Order was seeking a location farther west and Father O’Keefe was impressed by the location, the obvious devotion of the local congregation and the historical holiness of Osage Mission.  On his return to St. Louis he began correspondence with the superiors of his order.  His enthusiasm was rewarded.

The November 23, 1893 Osage Mission Journal reported that “Rev, John Baptiste C. P., provincial of the Passionist Fathers, visited Osage Mission officially in regard to the movement to establish a Passionist Monastery here.”   A subsequent article in the February 1, 1894 Journal noted “Raymond Newton and Miss Maude Friedman were married at the Catholic Church January 30.  This was the last marriage performed in Osage Mission by Rev. Bononcini before he turned parish affairs over to the Passionists.”  A February 15 story announced the arrival of Rev. Raymond O’Keefe C.P. and Rev Fr. Sebastian C.P. who would make their home here.   After this, Journal records include several articles regarding the first marriages, funerals and baptisms performed by the new Passionist priests.  Ceremonies for the formal possession of the Monastery at Osage Mission were held on Sunday, September 9, 1894[1].  An accompanying article described the ordination of seven Passionist deacons on the same date.  Osage Mission was proud and relived to have another strong, active, religious presence in our town.
​
But the relief was dampened by the St. Ann’s fire in September of 1895.  The fire was a devastating blow to the Sisters of Loretto.  With only $16,000 of fire insurance they could not afford to rebuild the academy.  Despite pleas from the citizens and the Passionists the Lorettos left in August of 1896.  The community followed with petitions and offers to help pay for a new school.  Adding to the confusion was a restructure of the diocese and (now) St. Paul fell under the care of Most Reverend J. J. Hennessy, the Bishop of Wichita.  Perhaps turmoil complicated communications but the decision regarding the Loretto departure was final.[2]
​
For two years, 1896 and 1897, the Ursuline's served the Mission.  Then in 1898 the Sisters of St. Joseph, whose Mother House is in Wichita, relieved the Ursuline's for what became a long run of service. 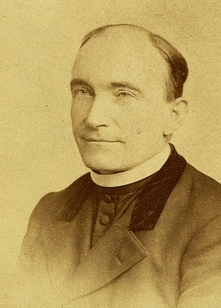 Father Hugh K. Barr, C.P.
The Early Work of a Passionist Historian.
Father Hugh K. Barr C.P. was a Passionist historian.  He was given the assignment of writing the history of the Passionists, in the United States, during the last decade of the 19th century.  This brought him to Osage Mission on September 8 of 1894 at about the time the Passionist Monastery (former Jesuit Monastery) was activated. Father Barr remained at the mission until October 22 and compiled a body of hand-written information, sketches and printed articles nearly all of which was written on or taped to yellow ruled tablet paper.  His Mission history was completed in 1898 and it appears as though information continued to be sent to him after he left Kansas.

We were able to obtain a copy of part of his Osage Mission work from the Weinberg Memorial Library at the University of Scranton, PA.  The information arrived on CD ROM in two sets:  There are pages labeled as blank and the numbering system suggests there is missing information.   But this archive is very interesting.   Content includes notes, drawings and several pages of newsprint. Part of it is written narrative and part of it resembles an inventory of things, events, donations and other information.  His history of the Mission is short, almost in note format.   One page titled “A Visit to Osage Mission” contains his name, the dates of his visit and a list of distances between locations he must have visited on his travel to the Mission.[3] 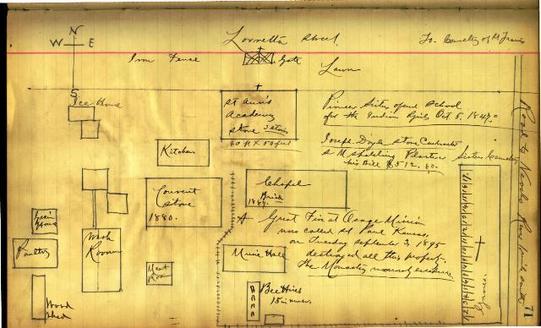 Father Barr's hand-drawn map gives a better location of the original Sisters of Loretto graveyard. Click to enlarge.
​While much of the information is not new to us today; it certainly provides a new perspective from another historian’s observations.  His map sketches of the St. Francis and St. Ann’s sides of the road are not to scale, but they do include information not shown on some of the more precise Sanborn fire insurance maps.   I was never quite sure of the position of the original Loretto Cemetery but Father Barr’s hand-drawn map of the St. Ann’s campus shows the locations of the grave sites and an adjacent page lists names and dates of death.   Using current landmarks, the north part of the cemetery might have been near or under the Lone Elm Schoolhouse on the existing museum campus (The graves were moved to St. Francis Cemetery in 1930).
Go to:  14. Citizen Lawmen - The Anti-Horse Thief Association  - or -  Story
​
​Or Go Straight To 15. The Passionist Influence is Expanded
Some Reference Information: ​ [1]  The monastery that the Passionists acquired in 1894 was the original Jesuit Monastery, built more than twenty years earlier.  That was the first of two monasteries that sat on church grounds.

​[2]  ​The Sisters of Loretto did return to Osage Mission from 1915 through 1922 with hopes of rebuilding the girl’s college.  Architectural drawings and funding were in place but the uncertainty of World War I caused the Lorettos to focus attention on their college at Webster Grove, MO.   St. Ann’s of the Osage existed only on blueprints.

The Loretto property south of the road, included in Father Barr's sketches, did not belong to the Passionists.  The Loretto's retained possession of the St. Ann's campus, and a large amount of local real estate, until it was sold in the 1960's

​[3]  I did not sign any releases and Father Barr's information is considered to be public and shareable.  I will be glad to share it with anyone with a thumb drive or similar device.  Transcription of the entire package into a single document would be a great project for an industrious and interested history buff.   You cannot help but learn a great deal while typing the man’s words and looking at the images; and your product would be searchable and easily sent to others. (Hint!)