In late 2009 I had been watching the Kansas Sampler Foundation’s 8 Wonders contests for several months.  I knew the 8 Wonders of Kansas History Contest was coming up.  Rosie and I had been members of the Kansas Explorers Club, a part of the Kansas Samplers Foundation, for a few years; and we shared occasional emails with Foundation Director, Marci Penner.
​
​Out of curiosity I contacted Marci and asked her if she had any idea of the number of History entrants they might get.  She said that the previous cuisine contest was pretty popular with about seventy entries.  She suspected the 8 Wonders of History contest could be similar. With that in mind, I talked to museum volunteer, Felix Diskin, about putting together an Osage Mission entry.  He thought it sounded like a good idea.
How it Worked.
The Kansas Samplers contests were set up for online entries.  Contestants submitted their nomination, online, with their organization information,  a synopsis of their story and the reasons why it was important.  In addition to the internet entry, contestants were invited to submit a more comprehensive written package if desired.  Once initial entries were submitted, by March 31, the foundation’s judges down-selected to 24 finalists.  Then the public got to vote for the final eight wonders of Kansas history. 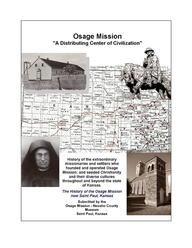 Click to download document
Our Entry.
We decided to submit our entry under the name of the Osage Mission – Neosho County Museum.  Felix prepared the synopsis, used for both the internet and written submissions, and a more detailed history of the mission.  I prepared some of the exhibit material including Exhibits 1 – 4 (Missionary Profiles, Jesuit Mission Stations, Local Historical Sites, The Mission Today).  Felix also wrote a Sources and References exhibit.  Together we put together a pretty good overview of a very complicated story.  Click on the figure at the right to download a copy of the written nomination. [1]
Now — Submit, Sit, Watch and Wait.  OH-OH!
We had our material ready at about the time the contest opened in early 2010.  We were among the earlier submittals.  When ours was completed, we watched the Kansas Sampler site as others were submitted.  Two things became evident: At that point, it seemed like we had little chance of advancing among a very strong list of competitors.  We considered our effort to be a learning experience.  Actually, I learned a great deal about our local history while publishing the nomination package.
We Underestimated Ourselves.
Sometime after the March 31st deadline, we were driving back from our daughter’s home in Larned and my cell phone rang.  Rosie picked it up and I heard her say “Just a moment Marci.  He is driving.”  I pulled over and Marci Penner briefly explained the foundation’s selection process.  They had a group of about ten judges, scattered around the state, who reviewed and graded all of the nominations via the internet.  Then she said something I will never forget:

​     ‘Several of our judges didn’t know where St. Paul was, but the selection team was in full agreement that the Osage Mission story was historically significant to the settlement of frontier Kansas.’

Then she asked me if the museum had any interpretive displays about the mission.  With tongue in cheek, I said “Yes we will soon.”  At that point, she told me we could consider ourselves among the 24 finalists in the 8 Wonders of Kansas History Contest.   A formal announcement would be done on April 22.  After thanking her and taking a deep breath, I called Felix and told him we needed to get the museum officers together to talk about how we were going to handle voting; but mainly where that interpretive display was going to come from.

On that drive home it dawned on me:

Below is a list of finalists — Our Running Mates (Alphabetic order):
An Osage Mission Display — At Last.
The day after my conversation with Marci, we met with the Diskins and two museum officers.  The museum allocated around $400 to put up a display.  After a couple of weeks of planning and sketching, we came up with a concept.  We rounded up a few mission items that were displayed separately and emptied a large showcase that was located near the lobby doors. Then we solicited the help of our friend Larry Jump, at Pitt State, to help with some foam core, metallic and vinyl display panels.  In the end, a significant part of the display information came from our 8 Wonders nomination package.

Dodge City's site 'Marshal' was a nice fellow with some interesting stories.
​A Trip to Inman.
Shortly after Kansas Sampler’s announced their finalists, we were all invited to their headquarters in Inman.  Marci’s staff made us all feel very welcome and described the election process in quite a bit of detail.  As we looked around the room, it became very evident, again, that we were among representatives of some very serious historical groups.  The Dodge City delegation, in particular, arrived in full dress with their marshal and a group of saloon girls.  They didn’t skimp money on costumes, and they most certainly had pulled the stops on funding and developing their nomination effort.

Final Voting During Mission Days.
With the down-select announcement made on April 22 and the final 8-Wonders voting deadline on June 18, our 2010 Mission Days Celebration fit conveniently in the middle.  While paper ballots were made available, most voting was done on the Kansas Samplers website.  Voters could sign in with an email address and cast three votes among the 24 finalists.  And yes, if you had more than one email address you could use all of them to vote.  I suspect Yahoo, Gmail, and other email services saw a pretty good population surge from Kansas during that time.
In addition to Mission Days, we had a kickoff meeting at the Museum and hung posters around town to get folks to vote.  As it turned out, we know we drew votes from across the United States and even a few from Canada and China; but we came up short on getting one of the top 8 positions.  The final results are shown below in alphabetic order.  Note the number of state and national historic sites in this group.
Disappointed?
​We were, of course, hoping for a top position.  But in the end, we are in the presence of a very select group of historical sites.  And when you look at sites, among the 167 candidates that were not in the finalist's group, our position was even more impressive. [2]   Also, there is no doubt that some of the nominations were funded by organizations like chambers of commerce or government sites.  Our volunteer effort was all that more satisfying.  Also, we enjoy a permanent position on the Kansas Samplers Website.   All things considered, we believed we had established a position from which we could grow.
Some Icing on the Cake.
​It was exciting having the contest active during our annual Mission Days Celebration.  But a couple more things happened during that Mission Days weekend that did, in fact, ice our cake:As I said above, the 2010 Mission Days experience was pretty darned exciting!

Tom Sevart, Blue Springs, Missouri, With His Gift Violin.
Some Reference Information:
1.  The nomination package was written more than ten years ago and is a little outdated, especially with regard to the number of Jesuit mission stations.  On page one it refers to more than 100 mission stations.  I can now account for more than 150 and there are probably more.  Instead of the 15 stations attributed to Father Colleton, there were more than 30.  The Jesuit missionary range covered an area from Mt. Vernon, Missouri, west to Dodge and Larned, with some visits to Pueblo, Colorado.  From north to south, they worked the areas south of the Santa Fe Trail, into southern Oklahoma and central Arkansas.  For more information on the Jesuit Missionary work from here, follow THIS LINK.

2.  Here is a list of some notable sites that did not end up on the finalist's list.  Take a moment to scan through it.  Many of these, as well as the finalists, are well-established historical sites that draw tourism dollars into their area; and provide full or part-time jobs at their sites.   There is little doubt, in my mind, that some of these organizations funded very professionally published nominations for the 8 Wonders contest. ​
3.   For more information about Father John Schoenmakers and the Immaculate Conception Church 'Schoenmakers Window,  Follow THIS LINK.