Who's Behind the Window?
The New Windows in Place — March 1900.
They have always been there — well, for at least 120 years.  We have taken the beautiful stained glass windows of St. Francis de Heironymo for granted and cannot imagine the sixteen years that those windows were clear glass.  Something we barely notice is the painted inscription in oval panels near the base of most of the windows.  Those are names of people who donated the windows in 1900.  They are among the people who built our parish and town.  Most of them are gone, but soon there will be a book that tells their stories. 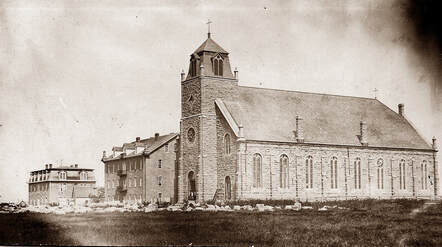 In its earlier configuration St. Francis Had a smaller steeple and clear glass windows. (Click to enlarge)
When St. Francis de Heironymo Catholic Church was dedicated on May 11, 1884 there was still work to be done.    The thirteen year construction project had been paced by funding; and Father Schoenmakers' desire not to burden his flock of settlers with a large debt. [1]  By the time it was dedicated the building was up and functional but less elaborate than planned.  The majestic steeple, elaborate altar, statues and other appointments, that were originally envisioned, would have to wait.  The elaborate arched, rosette and diamond shaped shaped windows contained clear glass, at least for the time-being. [1]   Sadly, Father Schoenmakers passed away ten months before it opened.

In 1893 things began to change.  The Jesuits had left a year earlier and the Passionist made a gradual — and then substantial commitment to Osage Mission/St. Paul. [2]  During the period of 1888 to 1902 the church saw several improvements to its structure and systems.  Perhaps the most visible were extension of the steeple to the existing height of 106 feet; a mew pipe organ and replacement of most of the clear glass windows with stained glass.
The Windows.
The January 11, 1900 issue of the St. Paul Journal reported that Father Boniface had concluded a contract with Mr. Jas. J. Wagner of the Kansas City Stained Glass Works.  The work would be finished in about three months.  The window project would replace all but a few of the large, clear, exterior windows with stained glass.   The January 11 article also said that Father Boniface had asked the people of St. Paul " ... to aid in this magnificent decoration of the beautiful church.  He appeals to the willing to leave a monument indelibly burnt in the glass to go down to generations yet to come." Eighteen large donated windows would be dedicated, by name, to individual or family donors. [3]
There are eighteen named donor windows, plus one that is unnamed:
​The People and the Stories Behind the Windows:
St. Paul native Randy Dunavan is working on an interesting project — "Who's Behind the Window."  The book is about the migration of Catholics from Maryland into Kentucky and other areas  and eventually to Osage Mission.  Many of these people are our ancestors, or other people who built homes, businesses and lives here in and around our town.  A very large part of Randy's book focuses on the people who donated for installation of the St. Francis windows, with very detailed profiles of each of the families or persons named on the St. Francis windows.  Names that are revealed from this study Go Well Beyond Those On The Windows Themselves.  They are St. Paul's earliest residents and hundreds of familiar families are represented in the book.  Some excerpts from his book are summarized on this website; but the book provides much, much more detail.  In a sense, it is a Who's-Who of early St. Paul.

Below is a sketch of the floorplan of the church with numeric keys for each of the featured windows and people.  To the right are links to individual pages that provide a description and position of each window; and a brief discussion of the individual or family.  In some cases, if the window itself is unique, we will tell you why.  Again, this is a very brief description and Randy's book goes into Much More Detail. [4]
Site Navigation Note:  Site navigation for this part of our website is a little different that the rest of the site.  In other areas link selection results in opening a new, separate page or tab.  The links above will open a page that replaces this one.  Then use the "Who's Behind the Window?" link on each page to return (or use the browser back-button.)  This will prevent having your browser clogged with several pages or tabs.  There are also navigation aids in the position shown below:
Some Reference Information:
1. Follow THIS LINK for a description of the original church building effort, and subsequent upgrades and repairs.

3.  Two more windows were also donated by church sodality groups.  These are the arched, painted windows above each of the sacristy doors.  These are discussed HERE.

4.  Randy was a member of the class of 1971.  After graduating from high school he studied in the seminary at Warrenton, Missouri and Neosho County Junior College; and served a hitch in the United States Navy.  He eventually ended up in Texas were he had a long career in sales with an automotive and motor-sports company.  Now retired, he can spend more time on his life-long interest — history and genealogy.

​Randy is serious about genealogy and has been at it for more than thirty years.  He started chasing Dunavan family history in the late 1980's when research involved physical visits to libraries, church offices, cemeteries, etc.  Today, research methods have improved significantly with on-line research sources and databases.  His own personal database includes nearly 270,000 individuals and that number increases almost daily.  Nearly all of those names have connections with St. Paul that reach across the world, especially Europe; and reach back into 14th Century Europe.  He has written 37 publications many of which are in the reference shelves of our local Graves library and the Osage Mission - Neosho County Museum.

Why the interest?  One answer might be; he comes from very interesting bloodlines.  For example:  Members of the Jarboe side of his family were among the founders of Westport, now Kansas City.  When the Lorettos came to Osage Mission in 1847 ... "Father Schoenmakers provided a comfortable two horse lumber wagon, and placed them under the care of Mr. Jarboe, a Kansas City merchant, who very kindly acted as their conductor." (from Father Ponziglione's memoirs, Chapter XII).

5.  The historic photo at the top of the page is from the files of the Osage Mission - Neosho County Historical Society.  The church floor plan - Ron Brogan.