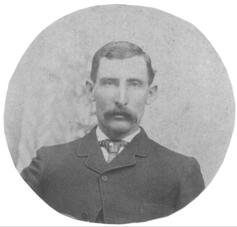 Thomas Keith "TK" Joyce (Shared by John Joyce)
​Thomas Sr. and Catherine Joyce were both born in Ireland and likely both in Kilkenny.  They spent time in the 7th ward of Rochester, New York where the 1850 census first records them as a family. It was there they lived among a mix of  Scots and Irish neighbors, that were described as laborers, carpenters, masons, and a couple of merchants.  In About 1853, the Joyce family relocated to the west some 450 miles near the small settlement of Marshall Township in Calhoun County Michigan.  Their time in Michigan must have been somewhat prosperous, because when they arrived a Osage Mission in 1869, they began acquiring property and starting businesses.   At that time they had seven children:  Elizabeth Jane "Lizzie" Joyce Quinlan (married in Michigan), Patrick J. Joyce, William H. Will Joyce, Thomas Keith "TK" Joyce, Catherine G. "Katie" Joyce Butler, John B. Joyce and Edward L. Joyce.

On March 27, 1879 the Chanute Times reported; "Thomas Joyce Sr. an old resident of Osage Mission, died on the 13th.   His wife Catherine passed on February 8, 1884.  Both were laid to rest at St. Francis Cemetery, St. Paul.  Of the seven Joyce children, some left but TK, Patrick, John and William spent much of their lives here and died here.  TK and John left a mark on Osage Mission and St. Paul with several business ventures and their families were prominent within the business, church and social communities. TK's wife, Ada, graduated from St. Ann's Academy and taught music and catechism.  TK and Ada had nine children: Ed, Bill, Mary, John, Blanch, Gene, Charlie, Olive and Maude.  Only one, John, put down roots at St. Paul

Like several of our window donors, the Joyce family has two members who followed religious vocations: Like many of the early window donors, the family and business stories include names of families and businesses from early Osage Mission and St. Paul.  Just a few of these, mentioned in the 45+ manuscript include: