​15. The Passionist Influence is Expanded.
As we entered the 20th century it was clear that the Passionists were ready to invest in St. Paul.   Facility improvements, repairs and a new monastery created a regional presence that gathered interest from across the nation. Without the Passionist influence, one has to wonder how our church building would have fared during the early 1900's.
When the Passionists took possession of the Jesuit property in Osage Mission on April 1, 1894 they acquired thirty-four acres of land on which set the present church, the previous Jesuit monastery building, a third stone building that was used as a school, a three-story frame structure known as the College Hall, a stable, ice house and a building that was used as guest and servant's quarters.  They also acquired a serious structural issue that was dealt with later.

​By the time Bishop Fink blessed the original Jesuit monastery building in September of 1894 it had been remodeled into a retreat house and 18 rooms were ready.  At that time a steam heating system was installed in the church. During the following year the firm of Dow and Caraley did some plumbing work in the church.

​By 1896, Osage Mission had changed its name to St. Paul and Rev. Father Peter Hanley had been elected as the second Rector.  During his term he brought a major improvement into the church—an large, very sophisticate pipe organ.  The December 1, 1898, issue of the Neosho County Journal reported:
"A sacred concert was held at St. Francis Church Sunday evening, November 27, in connection with the dedication of the pipe organ just installed.  Prof. Ben Nentwig, of Kansas City presided at the organ.  Prof. Ed DeVemie, Prof. J. Snow, Mrs. Kate Conway, Mrs. Kate Donnelly, Mrs. M.F. Whitney, of Kansas City; and Miss Teresa Maser, of Parsons, took part in the program.  Rt. Rev. Bishop Hennessey of Wichita was the speaker.  The organ was made by Lyon & Healy of Chicago.  A special train brought a large number of Parsons people here for the ceremony."
The turn of the century saw further improvements.   In January of 1900 the church contracted with Kansas City Stain Glass Works to build and install the existing stained glass windows.  Local parishioners donated part of the money for the project.  During the same year the church tower was extended 30 more feet to the present height.  In 1902 two more bells were cast and installed next to the Father Schoenmakers bell.  During the same year the church was entirely redecorated.  This included fresco work completed as a result of an estate contribution from Mrs. Peter Ward. 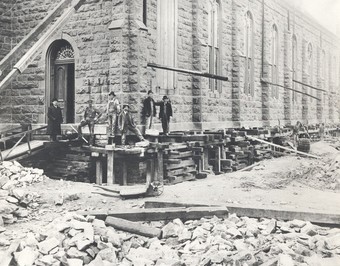 Much of the work to raise and repair the church was done by parishioners under direction of Grant Renne engineers.
By 1909 the Passionists realized the church had a serious structural problem.  The foundation was undermined and was beginning to fail.  This issue had to be corrected to save the building.  The July 29, 1909 issue of the St. Paul Journal reported:  "Work of raising St. Francis church and putting a new foundation under it is starting."  The Passionists had contracted with the Kansas City firm of Grant Renne to do what some people still consider unthinkable—the entire 7,000 ton structure was lifted from its foundation and a new basement foundation was installed.  When completed the church sat four feet higher making room for a basement chapel.  There is no doubt that this needed to be done, but it also prepared the structure for the next major improvement.
The Passionist Monastery.
In 1911 the Passionists solidified their commitment in St. Paul when the Provincial Chapter decreed that a new retreat house would be built here.  This was a major construction project requiring many changes to the existing church/school campus: 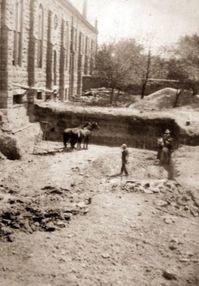 Digging the monastery basement.
The project was executed quickly by early 20th century standards and the new monastery-retreat house was dedicated in November of 1913.  Completion was in time to allow St. Paul to host fourteen Passionist exiles from Mexico during 1914.  These men had driven from their monastery in Toluca, Mexico and arrived in St. Paul penniless and exhausted; but thankful for their lives.  However, it is noted that some of them were later killed in Spain.
​
Perhaps most impressive was the fact that, after all of the improvements, the church cleared its debts in 1920.  A month-long drive for funds resulted in $15,000 being collected.  This parish spirit of generosity was tested again, in 1974, when the Grant Renee company and LaForge and Budd teamed together to re-stabilize the church foundation and do repair and remodeling work. 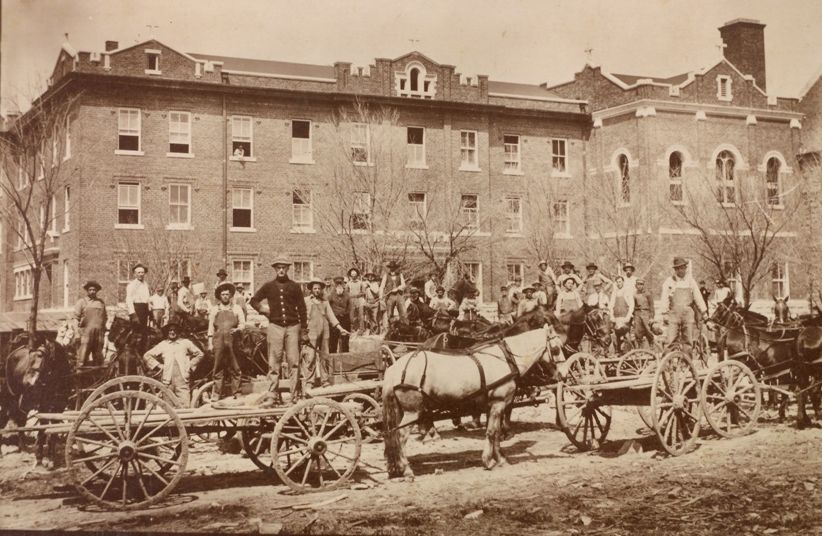 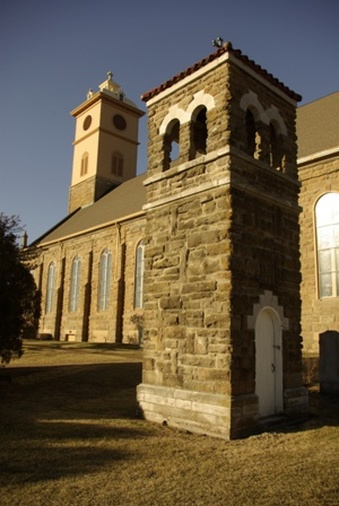 The garden bell tower was built by a group of inexperienced novices.
A True Community Presence.
​In 1936 the new monastery became more than a retreat house.  In August, St. Paul became the location of the new Passionist Novitiate of the West and those who lived here during the next three decades will always remember living in the monastic atmosphere.  Classes of young men in heavy wool habits and sandals came and went annually.  They seemed like very nice young men but we never really got to know them.  They were required to remain silent much of the time.  But, oh my--They Could Sing!  Those who heard the monastery choir during Masses knew we had our own taste of Rome's Sistine Chapel Choir.

The beautiful novice garden (now our church garden) was built and completed in 1940.  The garden tower that contains the bell from the original log church was also completed in the late 1940's.  A few years ago we were honored with a visit from one of the novices who helped build the tower.  Very sharp-of-mind in his 90's he recalled that he and a couple of other novices, who showed mechanical aptitude, were rounded up and told they would be stonemasons.   He also recalled the group might have needed special attention to stay out of mischief.  In any case, they did a magnificent job.

We had priests—lots of priests.   There were many scheduled Masses and some mornings there were Masses on all three of the front altars of the church.  A few of us remember the center-side altars that were also used at times. Some people didn't know that there were also Masses in the upstairs chapels and the basement.  Finding a Mass to fit farming or work schedules was not much of a problem.  I recall mornings during Easter or Christmas when all three front altars were used for three back-to-back Masses.  As a young altar server, if I was scheduled to serve the first Mass, I really wanted my buddy to replace me for Mass #2 and if not—PLEASE Mass #3!  We were not quite as used to three hours of kneeling as the Novitiates.

On the celebration of Church feasts we had the benefit of participating in the multiple Masses, solemn processions, the music of the students and the deep religious experience that can only be appreciated with the monastery presence.   Besides this, we had the privilege of attending some Passionist ordinations to the priesthood—a ceremony many people had to drive a long distance to witness.

Most of us did not understand what we had until it was gone.
More Transition.
The decades after the middle 60's were a tumultuous period with war, campus unrest and political problems.  Given all of that, it seemed even worse here.  After having been a Passionist novitiate for thirty years the St. Paul location was closed. The last novices left the St. Francis Retreat in 1968.  More sad days followed.

On February 23 of 1983, the Passionists closed the St. Francis Monastery and Retreat house.  After that, one Passionist remained as the Parish priest for a few years.  When Father Luke Connolly left in 1987, and turned the parish over to a secular priest, it ended more than 90 years of Passionist presence in St. Paul.  Two years earlier, attempts to re-purpose the majestic retreat house had failed and it too disappeared. 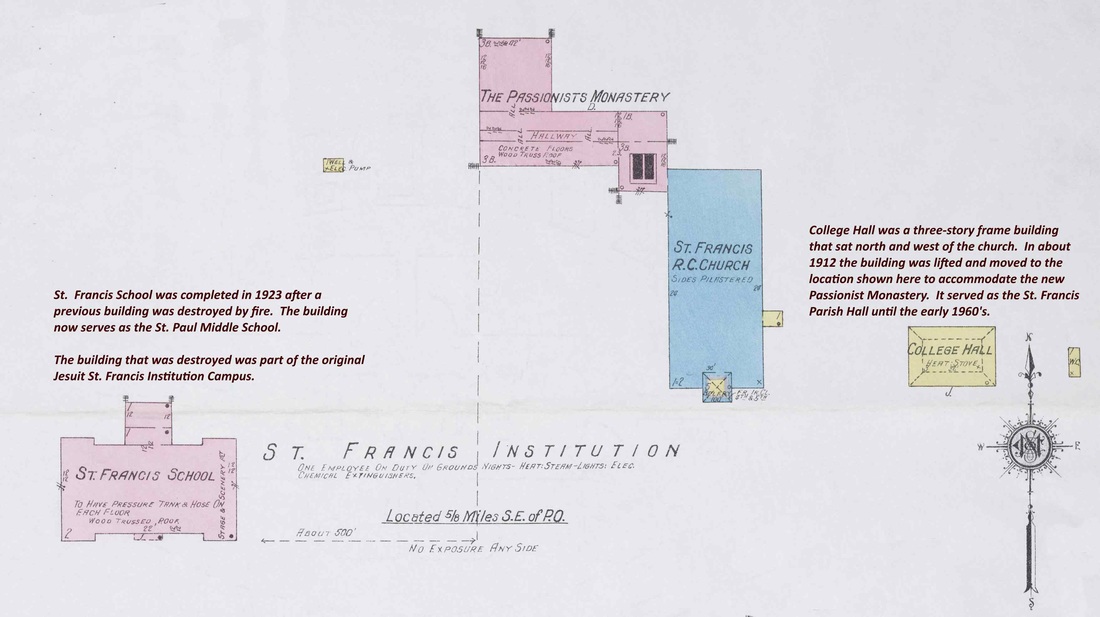 Map showing the Passionist Monastery attached to northwest corner of St. Francis Catholic Church in St. Paul. It is noted that the original Jesuit Monastery, that sat immediately west of the church, was razed to make room for the Passionist Monastery. This illustration was photo edited from a 1927 Sanborn fire insurance map (Click to enlarge.)
Return to:  Our Story
Some Reference Information:
Much of the material for this segment came from the following sources:
InFormation, Moments in Time.    A few years ago a part of our Passionist history visited the museum.  Steve George, of Arizona, was a student at the monastery in 1965-66.  A museum volunteer asked him to write down some of his experiences as a student and he took the request a step farther.  Steve is a web developer who already had a web site used to track some of his old classmates and experiences.  It also included a section about St. Paul.  To that site, "InFormation", he added a very insightful publication called "A Year and a Day".  In it he discusses things he experienced while he and his class were here; and parallels those experiences with things that were happening in the world that many of them were unaware of at the time.   Links to his site follow:*Steve asked me to mention that the main website, InFormation, has not been updated for a few years.  By the way, Steve is not related to the area George families.  He did not become a Passionist.