​ Some parts of our story begin east of here—along the Mississippi, Missouri and Osage Rivers.  Other parts came up from Oklahoma and Arkansas.  These elements set the stage for the entry of the Osages into Kansas. As the Osages came they brought with them civilization, commerce, religion and education.  To this, the white man added government, war and a plan to remove them from Kansas. ​
Our Story:
The story is presented like a magazine with fifteen main chapters or 'articles'.   I have tried to keep each article at around 1,000 to 2,000 words like a magazine story.  Some of these articles, have links to descriptive sub-articles that are short with illustrations.  Like a magazine you can read from front to rear or pick articles that sound interesting.

The first four chapters lead the reader to the founding of the Catholic Mission.  Generally, these set the stage, and provide some reasons why the Catholic Mission was finally founded.  These are necessary to understand how the essential union between the Osages, the French and the Jesuits developed over time.  Without that union we would not exist; and much of the southern Kansas landscape would be very different today.

Our Regional Time-Line:
The time-line below illustrates the approximate period of the fifteen articles.  Each numbered article/chapter can be selected from the "Contents" links list below the illustration.  The sub-articles are also listed in the Contents list. 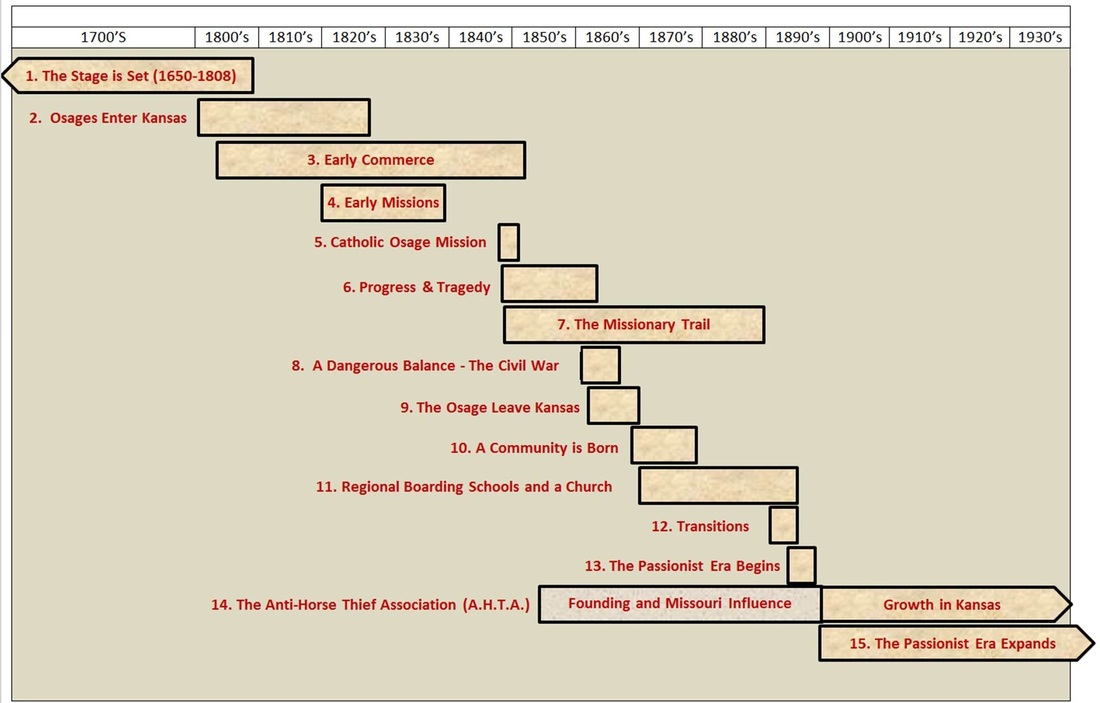 I believe our story warrants attention as a Kansas Historical Site, or a National Historic Site.  It would take a team, some funding and determined effort to achieve the prominence that would pull thousands of people into our area instead of hundreds. With prominence comes economic advantages including jobs.  After all, our local historian and author, W.W. Graves, achieved prominence with The Vatican for telling parts of the story; and, in turn, he became part of our story.  The story has also been the subject of countless papers, books, thesis and other material written over the past 100 years or so.   What we do with our story from now on is entirely up to us.   ​
Some Reference Information:
This is a story and not a thesis.  It is presented at a very high level and barely scratches the surface of our history. For those who want to dig deeper I have provided some references with the articles at this position on most pages. Generally these include respected sources like: Sister Mary Paul Fitzgerald, John Joseph Mathews, Louis Burns, W. W. Graves, James D. White and others; including some web sources.
​
* Chapter 9A discusses the treatment of the Osage by the Osage Mission priests and sisters.  The sub-chapter counters some comments we occasionally get, regarding abuse, when we post mission articles.