This June, 1910, photo shows a small army of about 200 Knights of Columbus members on the steps of St. Francis de Hieronymo Catholic Church in St. Paul, Kansas.  Given the challenges of the time the word “army” seems appropriate. 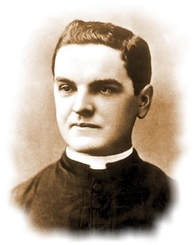 Father Michael McGivney - Founder of the K of C
Knights of Columbus Council 760– The Early Days.
On Sunday, March 29, 1903, St. Paul was filling with strangers.  The largest delegations came from Parsons, Topeka, Emporia, Kansas City and Mineral.  At 9:40 a.m. a special train arrived from Parsons with four coaches carrying one hundred Knights from Council 643, and an equal number of visitors.  The train was met at the depot by more than a hundred local citizens.  All formed a procession, across town, to St. Francis Catholic Church and College Hall.  During the day there was a Solemn High Mass at the church, a banquet and ultimately the institution of Knights of Columbus Council 760 with sixty new candidate members — the largest class of new members initiated in Kansas at the time [1].

Three months later, on July 23, another train from Parsons arrived in St. Paul.  When Parsons 643 and St. Paul 760 members were all aboard, two coaches were filled to capacity.  The train then proceeded to Fort Scott for the initiation of forty-five men into newly formed Council 796.  Thus, the progression of Father Michael J. McGivney’s Knights of Columbus spread across the nation, ultimately forming 19,000 councils with nearly two million members [2] [9]. 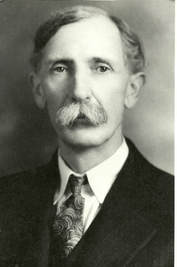 W.W. Graves - Founding officer and Knight of the Vatican.
It is worth noting that when Council 760 was formed, none of its members were from long-time, multi-generation parish families like many we have today.  St. Paul was barely 35 years old.   The name of our town had been changed from Osage Mission to St.  Paul less than 8 years earlier.

A example of a new Knight was the council’s newly initiated 33 year-old Lecturer. William Whites Graves had only been here for 23 years.  Graves arrived from Kentucky in 1880 at age ten.  That was about twelve years after the initial town council was formed.   Graves would later receive the highest lay honor of the Catholic Church for telling the story of the progression of the Church in Kansas — much of which is our own story [3].   ​For more information about Mr. Graves follow THIS LINK.
Core Principles:
The Knights of Columbus was formed around four core principles:  Charity, Unity, Fraternity and Patriotism. Adherence to these principals has resulted in the Knights becoming a formidable force in Christian philanthropy, brotherhood and support of the Catholic Church.  From a current perspective, our most visible trait is probably charity.  During the past three years alone, Council 760 has distributed more than $90,000 to individuals in need or local organizations.  But during the early 20th century, supporting the Church meant actively defending the Church from anti-Catholic organizations like the Ku Klux Klan. 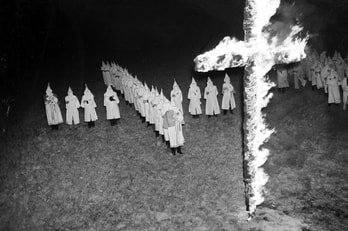 The Ku Klux Klan waged a media and violent war against the Church and the KofC
A Small Army Became Big.
The Church and the Ku Klux Klan have always been at odds.  But in the 1920's, the Klan declared all-out war against the Catholic Church and the Knights of Columbus.  Much of the dispute was fought with words against a Klan propaganda campaign, but it was also violent.  In 1921 a Catholic Priest in Birmingham, Alabama, was murdered shortly after marrying a recent convert and a Puerto Rican man.  The bride’s father who was opposed to the the conversion and the marriage pulled the trigger, but he was acquitted by a Klan-influenced court.  Three years later, in Gainesville, Florida, armed Knights guarded their church and rectory after Klansman nearly beat their pastor to death.   In Neosho County, Kansas, the predominantly Catholic town of Osage Mission – St. Paul was looked upon as serious political threat.  During the 1920’s the Ku Klux Klan was actively recruiting members with large, cross-burning rallies.  Crosses were also burned in front of a few Catholic homes.  Knights took active roles in local political races to offset what became a Ku Klux Klan political movement.
As the Knights of Columbus grew, so did its financial and political clout.  The Knights mounted an aggressive anti-propaganda campaign and fought the Klan with words, court-action and rewards for proven slanderous behavior.  Klan aggressiveness eventually faded.  Today, the he Knights have become active in promoting awareness of the Christian persecution by ISIS.  Ongoing support of the Church as well as philanthropic efforts prompted Pope John Paul II to refer to the Knights of Columbus as a “strong right arm of the Church.” [4]

Click to enlarge.
We “Celebrated” New and Advancing Members.
From time-to-time local folks come across relics from early Knights of Columbus meetings and degree initiations.  One such relic [5] [6] recently appeared in the form of a program for a large first, second and third degree initiation hosted by Council 760 on October 12, 1913.   Click on the photo at the right to enlarge the image of this very well preserved document.  The gallery below takes a look inside.  As the following excerpt from the October 16, 1913, St Paul Journal suggests, it was quite a celebration:

“The day’s program opened at 10 o’clock a.m. when a large body of both local and visiting members assembled at Grave’s Hall, and was led by the band to St. Francis church were Solemn High Mass was sung and a practical sermon was delivered by Rev. Fr. Rogers, C. P. who is one of the most noted missionaries of the Passionist order, and speaks in an eloquent manner and tone of sincerity.

The Knights’ and ladies’ reception committees met arriving trains all day and the visitors escorted to headquarters in automobiles.  The program of the day was carried out to the letter.  The exemplification of the degree work started at two o’clock and was not completed until seven o’clock.  The first and second degrees were exemplified by the local council and the third degree by the state team under direction of W.D. Jochem of Wichita, state deputy.

After the initiation ceremonies the crowd proceeded to College Hall where the ladies had prepared a bountiful banquet and three hundred partook.”
​

With several toasts and a supply of cigars, the day's activities likely ended with a relaxed group of Knights and wives in a smoke-filled College Hall Building.  For more information about the Knights of Columbus, Including Council 760, follow THIS LINK to the St. Francis - St. Ambrose Parishes website.
Some Reference Information:
​1.  Refer to St. Paul Journal front-page article of March 30, 1903 for the institution of KofC Council 760.
2. Refer to St. Paul Journal article of July 23, 1903 for the institution of Council 643, Fort Scott.
3.  In 1952 W.W. Graves received a Vatican Knighthood of St. Gregory the Great for his work in recording the history of the Church in Kansas.  For more information about Council 760 charter member, William Whites Graves, follow THIS LINK.
4.  The Knights vs The Klan, The Knights of Columbus, Columbia Magazine, Online Edition 11/1/2017, http://www.kofc.org/en/columbia/detail/knights-vs-the-klan.html.
5.  Thanks to Judy Fager, St Francis Parish, for finding the very well preserved pocket-program for the October 12, 1913 initiation program that inspired this article.  This document has been donated to the Osage Mission - Neosho County Museum.
6.  Refer to St. Paul Journal article of October 13, 1913 for the a description of the initiation program.
7.  The banner photo contains about 200 Knights.  I have made several attempts to count noses and finally settled with 196.  That is probably inaccurate because every time I counted a block of faces, I looked back and saw a hat or mustache hiding in a shadowed area of the photo.   This photo is in the Council 760 archive at the St. Francis Parish Hall, St. Paul.
8. The evening program notes a toast on "True Knighthood" by Rev. Fr. McKernan.  Father Thomas McKernan received some notoriety as a mission priest and a poet.  Shortly after his ordination  in 1907, he was given charge of a mobile train mission car called the Chapel Car that traveled along a circuit that included much of the Wichita Diocese, with longer excursions to Oklahoma, Texas and Louisiana.  Later he  was assigned to parishes at Greenbush, Wichita, Great Bend, Parsons, and St. Benedict's College (Benedictine) of Atchishon.  In 1937 W.W. Graves published a book "The Poet Priest of Kansas, Father Thomas Aloysius McKernan" that tells the story of this remarkable priest who was orphaned at age six.  Father McKernan published his own book of poems "Musings" sometime prior to Graves' book.  The 189 page book contains poetry about many subjects, all written by Father Tom.  It does not have a published date.
9. For the record, all three of the parishes represented by these councils — 643, 760, and 796 — were started through the missionary efforts of Osage Mission Jesuit Missionaries.