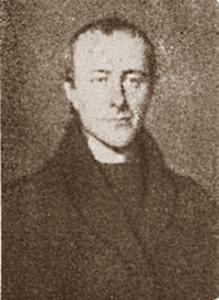 Father John Schoenmakers
A Site Survey of the Mission - 1846.
It took nearly three years to complete arrangements, the complexity of which is beyond the scope of this segment (See Reference Information below).  So we’ll fast-forward to the fall of 1846 when thirty-nine year-old Father John Schoenmakers visited a primitive location thirty miles west of Missouri border with the frontier desert.  He was here to do a site inspection of what became his home.  The purpose of the inspection was to ascertain what equipment and supplies would be needed, by himself and a missionary team, to start and sustain the Mission.  He also wanted to introduce himself to the Osages.

What he found at the site was disturbing.  The buildings were not yet completed and the contractors were uncomfortable with the remote location.  They were among very few whites in the region and they wanted to get back to civilization.   Supplies and equipment were scarce, and they had cut many corners.  The poor quality of their work would become evident when the Mission was occupied.   His meetings with the Osages were a mixed blessing.  He was very warmly welcomed by the chiefs and their people; but then he fully comprehended the term “savage” as it was used to describe his new flock.  Father Schoenmakers had been briefed in Missouri on what to expect, but he was unprepared for what he observed.  Nonetheless he returned to St. Louis and began assembling his missionary team and supplies.

The routes taken by the Jesuits in April of 1847; and the Sisters of Loretto in October of 1847.
Arrival of the Black Robes.
​On April 28, 1847 a small procession of ox-drawn wagons rolled into the grounds of the Catholic Osage Mission. Five men climbed down from the carts and were quickly surrounded by an enthusiastic group of Osage who had come to greet the Tapuska-Watanka (priest lords).  The missionaries included Father Schoenmakers and his young assistant Father John Bax; and three coadjutor brothers:  John Sheehan, John De Bruyn and Thomas Coglan (Brother Thomas O’Donnell joined them in 1848).  All five of the men had already immigrated to a new land when they came to America.  But the Mission site might have seemed alien.  Father Bax’s impression of their arrival is embodied in the opening quote.
​
The team of Jesuits was travel-weary.  They had left St. Louis on April 7 via river steamer and the voyage down the Missouri River took nearly a week.  When they arrived at Westport their possessions and supplies were transferred to wagons for the rough, dusty prairie leg that took nearly two weeks.  Fatigue might have been bolstered by the excitement of their new flock of Osage.  They unloaded the wagons, set up their classrooms and opened the Osage Manual Labor School for Boys on May 10, 1847.  By the end of the month fourteen Indians and mixed-bloods had enrolled—at the end of two months it was eighteen. 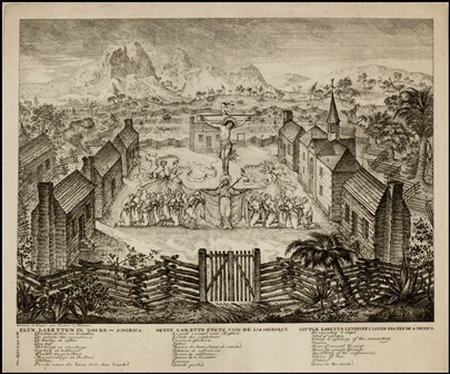 A stylized drawing of the Loretto at the Foot of the Cross Convent at Nerinx. Kentucky. The drawing is believed to have been done in Belgium from descriptions; which might explain the mountains and palm trees. A colorized version is shown in Mother Hayden's segment.
Staffing the Girl’s School.
The opening phase was complete but Father Schoenmakers’ contract with the government included educating Osage boys and girls.  So he set about the difficult task of finding a group of religious women to run his girl’s school.  In St. Louis he talked to several orders of nuns.  None were willing to face the rigors and danger of the isolated prairie assignment.  Discouraged, he traveled to Kentucky to visit the Loretto Mother House in Nerinx.  The Sisters of Loretto were receptive.  Their ranks included sophisticated, well-educated young women who had vowed to serve the missionary works of God.  On October 10, 1847, Father Schoenmakers returned to the Mission with Mother Concordia Henning and Sisters Bridget Hayden, Mary Petronilla van Prater and Vincentia McCool.  The Osage School for Girls opened on the day of their arrival.

Now, the Mission was functioning precariously.  The nine Jesuit and Loretto missionaries were among few white people in the region and all but one of them were immigrants.  Kansas was not yet a territory and statehood was fourteen years in the future.  The only semblance of law and authority was Fort Scott, nearly forty miles away.  As time passed, Father Schoenmakers became a regional point of authority.

​The time ahead of the missionary team would be both rewarding and frightening. 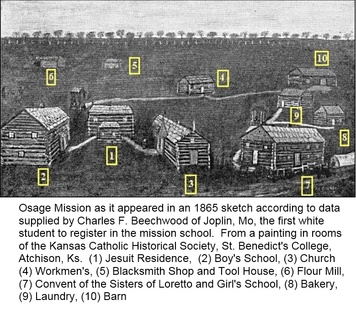 The Layout of the Catholic Mission.
When completed the Catholic Mission complex included ten buildings.  The major buildings were the church, two school buildings, and a Jesuit residence.  The mission also included several other maintenance and utility buildings needed to sustain the schools at a very remote location.  Follow these links (or "Story" sub-links) to three pages that will describe:
Go to:  6.  The Early Days - Progress and Tragedy - or - Story
Some Reference Information:
*Note:  Sister Mary Paul Fitzgerald’s “Beacon on the Plains” provides many of the details regarding approval of the Catholic Osage Mission as well as the wording of the actual contract between the government and the Jesuits.  The book is available at the Graves Memorial Public Library or may be purchased from the Osage Mission – Neosho County Historical Society.