​10. A Very Unique Community is Born.
“As the whites settled first around our Mission, the idea struck me of a Mission Town. Gen Blair was to be remunerated if possible and Gov. Geo. A. Crawford wrote me a letter congenial to my plan. The town took a start, whilst Sam Williams and Ben McDonald brot* us a mill …... Our friends in Ft. Scott have labored hard for our railroad interests and today, whilst we celebrate the event, our city is being surveyed for the opening of a promised railroad.”
Excerpt from a speech given by Rev. John Schoenmakers on September 24, 1870  (The speech is here)
​Recalling scenes from old western movies, imagine an immigrant settler-entrepreneur stopping the family wagon at the crest of Beechwood hill.  Gazing down into the beautiful Neosho Valley, the driver says to his wife:  “Here!  We will build our home and town here!”  The rest of the movie is about the struggles to attract essential commerce, schools and churches into a new settlement.  By the late 1860’s that scene was being played out at locations across the Kansas prairie.

But that did not happen here—not by any stretch of the imagination.  The Osage Mission – St. Paul story is unique among frontier startups for several reasons and that uniqueness served us well for many years.

First—With the end of the Civil War, and finalization of the Osage treaty agreements, a sense of calm was returning to the region.  Legal floodgates restraining white settlement on the Osage reserve were opening and thousands of settlers were moving into the fertile lands of the Neosho, Verdigris and Arkansas River basins.  Located barely thirty miles from the Missouri line, and near the eastern edge of the reserve, the Catholic Mission site was on the virtual doorstep of the westward movement.

Third--commerce was already here.  The Osages and traders had drawn economic stimulus into the area years before.  Gilmore Town had developed into a settlement and the postmaster role had been transferred from Father Schoenmakers to Sam Gilmore a few years earlier.

Fourth--and most important, a church and schools were already here.   Father Schoenmakers and Mother Bridget Hayden already had at their disposal a team of well-educated teachers, administrator’s, priests and nuns. They had a dream-team to assist with founding one of the most unique towns and educational systems on the Kansas frontier. Their mission schools would have to be re-invented but Fr. Schoenmakers had the resources and a plan.

It is also noted that the wide-ranging Jesuit missionary work that started in 1847 continued into the 1880's.  But as the town of Osage Mission grew, the Jesuits focused much of their energy on Osage Mission church and school interests and tribal missionary work in Indian Territory (Oklahoma). 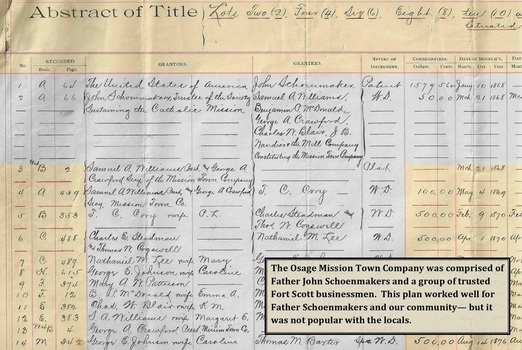 Original Land Abstract - Click to enlarge.
​The priest’s vision of our founding was also unique.
Father Schoenmakers' founding town company was composed of Gen. C. W. Blair, Geo. A. Crawford, S. A. Williams, Benjamine McDonald, John Naudier, the Mill Company and himself.  Other than himself, all members were Fort Scott men who had already invested time and capital in the settlement.   He knew the men, trusted them and believed he owed them a debt of gratitude.  General Blair, in particular, had been post commander at Fort Scott during the war and Father Schoenmakers credited him with saving the Mission and other settlements in the region. These men had already invested in a new Grist Mill and were instrumental in having a railroad line directed to Osage Mission.  However, his selections riled several local businessmen who believed they should have been included in the town company. By that time, the good Father had already immigrated to America, founded a remote mission, dealt with devastating epidemics, buried his trusted assistant, endured a war and exile and had seen his beloved Osages nearly decimated.   He was going to build the town his way, and he could smooth the testy settler's feathers later! 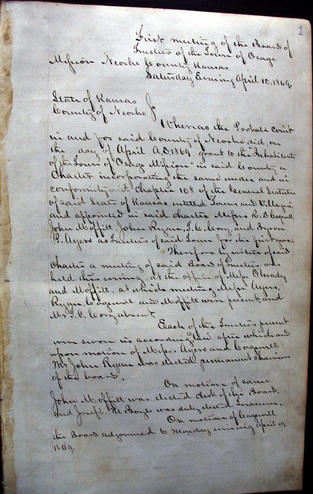 Page from the first trustee's meeting of the Osage Mission Town Company - April 10, 1869 (click).
​On March 1, 1868 Father Schoenmakers deeded a portion of his land to the town company.   On April 10, 1869 the trustees held its first town council meeting and started the process of being incorporated under Kansas law.  By then the town had been platted for sale to settlers and businessmen.  The town was platted with a central residential and business area plus five additions: St. Francis Addition, St. Francis II Addition, Drakes Addition, Roycroft Addition, Crawford’s Addition, and Catholic Mission Addition.  Funds from the two St. Francis Additions were directed to Father Schoenmakers' schools plan.  Sam Gilmore’s Gilmore Town was quickly over-ridden by the new town and it became the Catholic Mission Addition.  The church and schools were not in the platted city limits.

​Osage Mission experienced rapid growth and by the middle 1880’s reached a peak population of about 1,400.  More importantly it maintained population during a period when some other area settlements grew and died within a decade or less.  He had selected his team well and when Father Schoenmakers was satisfied his mission town was in good hands, he withdrew from the town company and devoted his energies to his schools and a new church.

And Oh-My Goodness—he certainly built quite a church!
Go to:  11.  Regional Boarding Schools  - or -  Story 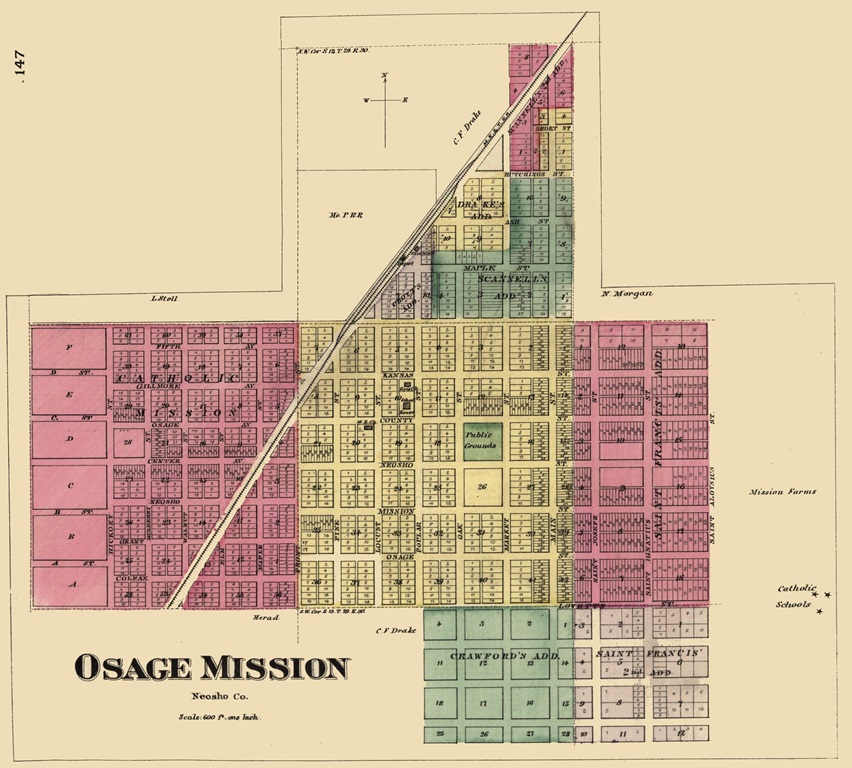 Early map of the town of Osage Mission. Note the schools and church are outside of the city limits.
Some Reference Information:*Note:  Spelling of words like "brot" (brought) or "bout" (bought) was common into the early 20 century.