7A. Missions—Mission Stations—Churches
“For us of the twentieth century the importance of the Osage Mission lies, however, not in its accomplishments as civilizer of the Indians, but rather in its contributions to the civil and cultural needs of the pioneering white settlers of southeastern Kansas.  But the point that is likely to be overlooked that it was the Osage who pleaded for the missionaries to come to Kansas.  Without the Indian there would have been no Mission.”
Sister Mary Paul Fitzgerald, Beacon on the Plains. 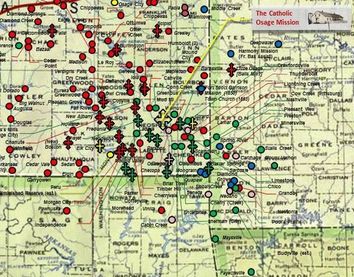 Click to enlarge.
​ When the Jesuits came into Kansas, they brought a crucial mechanism for the spread of civilization into our area – trail riding missionaries.   The Catholic Mission served as a center for the propagation of Christianity and the Catholic faith south of the Santa Fe Trail.  Mission stations and churches were founded at more than 150 locations in five states.  The colored dots on the “Missionary Trail” map on the previous page illustrate much of the Jesuits work.  A segment of the map is shown here.

Missions.
A standard definition of a mission reads something like:  “A group of people, sent by a religious organization, across boundaries or into a foreign land with the purpose of evangelism or humanitarian work.  A mission often has a specific location and buildings”   That is a good definition for the Catholic Osage Mission.  When the Jesuits came to our area the western Missouri line was the border with a wild, foreign territory—The frontier or "Great American Desert"). The Mission was located in a very remote, hostile location with little semblance of law and authority.  When the Catholic Mission was fully established there were about ten buildings here including schools, residences, the church and maintenance or service buildings (such as a blacksmith shop).  The Catholic Osage Mission was a semi-permanent facility that had a life of about twenty-three years.​ 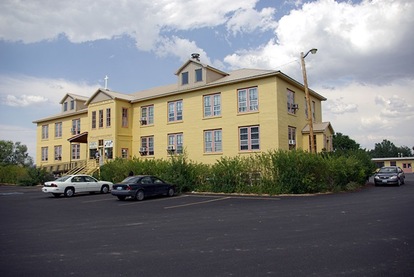 St. Stevens Mission, central Wyoming.
​Another longer-term example is the St. Stevens Indian Mission in Central Wyoming.   St. Steven’s was founded by the Jesuits in 1886.  At the time the Arapahos of the Wind River Reservation were unsettled and unhappy.  The Arapaho Nation was approaching the pitiful state of the Kansas Osage a few years earlier.  The mission was founded for religious and humanitarian purposes and, after a turbulent start, was successful.  So successful that it still operates, as a mission, with a modern school, church and museum. One reason I used St. Stevens as an example is our own Father Paul Ponziglione served a 21 month assignment at St. Stevens during one of its turbulent periods (spring of 1890 through early 1892).   We visited St. Stevens a few years ago and were saddened to discover that they, too, had forgotten much of their history related to the Jesuit missionaries. 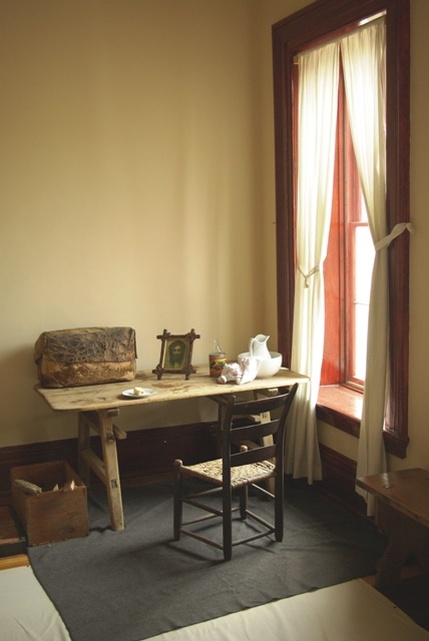 Transient Jesuit Room Display at Fort Larned National Historic Site.
​Mission Stations.
Mission Stations were temporary.  There were no permanent facilities and some mission stations, within a settled area, might have changed locations during subsequent visits by the priests.   A mission station was a place where area Catholics could gather to fulfill their religious obligations on a fairly regular basis.  “Regular” might mean a few times a year.  Some stations served their purpose for a short time until a church was constructed, rail construction ended or until a settlement simply failed.

Mission stations were often in homes, business buildings, railroad maintenance houses or temporary fort facilities. One example is the Jesuit station at Fort Larned.  A few years ago the head ranger-historian at the Fort Larned National Historic site explained that during the 1870’s the fort had a politically-appointed Presbyterian chaplain.  However, nearly all of the soldiers were Irish or German Catholics.  Father Philip Colleton, from the Osage Mission, made occasional trips to the fort and Dodge City to celebrate mass, hear confessions and offer counseling. The fort has a replica of the “Jesuit Room” in one of the officer’s quarter’s buildings and the display discusses Osage Mission.
Churches.
Churches are ....  churches.  But many of the churches in the southeastern quadrant of Kansas were started by the Osage Mission Jesuits, as evidenced by the cross symbols on the mission map.  Some started from mission stations that were quickly converted to churches.  Others took time.  Two examples:
Tree-Stump Evangelization.
The 150+ mission stations and churches were listed, mapped and had recordable life-cycles.  But as the Jesuit Missionaries traveled from station to station they never knew what they would find.  Whenever two or more Catholics were found in an area, Father Ponziglione would call them together in a tent, shed or house so they could fulfill their religious duties.  On occasions, the priests stumbled across desperate, half-starved settlers who had lost their way or become discouraged.  They didn’t even have furniture and a tree-stump or wagon might serve as an altar.  In these situations they tried to do whatever they could to help but these efforts were never recorded on lists or maps.
Some Reference Information:
Note [1]  Links to a three-part article in the Wichita Catholic Advance Newspaper about Father Ponziglione’s work in early Wichita, Kansas: