Once we sifted John from among the fifteen candidates, his activities were fairly easy to follow.  As noted above, he appears to be smart, rambunctious and social, making him a favorite for the area newspapers.  He attended schools here including our St. Francis Institute college.  During this time he made several friends, several of whom became well known local citizens — ​Frank Barnes, John Brogan, George Bonifas, Pat Conway, Joseph Hentzen, Joseph Metzger, William Dowd, Frank Fox, James Quinn, Thomas Quinn, Fred Sork, Leonard Wheat and Bryon Shea.   As he grew older his circle of friends grew to include: ;  C. J. Hentzen*, Frank Barnes*, the Gutting* sisters, Ed Fitzsimons*, the mayor's son Henry H. Null, among others (*Also window donors). [1]

Of particular importance is a relationship he developed with Dr. Robert A. Brogan.​  In December of 1896 John Butler assumed the management of Dr. Brogan's Drug Store.  John also grew close to Dr. Brogans Sons John Edward and Joseph Brogan.  This relationship undoubtedly led him to  to enter pharmacy school in Kansas city in 1897; a path that led to a decades long career as a druggist.  It also eventually led him out of St. Paul.

Over a period of a few years, John and Joseph Brogan started businesses in St. Paul, Parsons and Coffeyville.   He also acquired a license to practice pharmacy in Indian Territory.   The Butler story is another that eventually intertwines with many of the St. Paul residents and names.

The Advance Register of March 8, 1946 included an obituary:  John A. Butler, 73, a former Coffeyville druggist, died February 21st in the home of a sister, Mrs. Mayme Conway, in Muskogee.   Butler was born in 1872 in Osage Mission, now St. Paul, Kansas.  He moved to Coffeyville in 1909 where he resided until 1943, at which time he moved to Muskogee.   Surviving, beside the above sister, are two other sisters, Mrs. Lizzie Shea, Kansas City and Mrs. Hanna Quinn, Los Angeles, California.  Funeral services were held in the Muskogee Church.  Burial was in a Muskogee cemetery.
John A. Butler funeral service was held at the Holy Spirit Catholic Church and then was interred at Greenhill Cemetery, Muskogee, Muskogee County, Oklahoma. 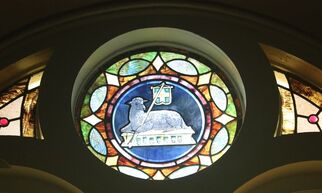 The John Butler stained glass is crowned with Agnus Dei with the vexillum. This symbolizes the Lamb of God with a Roman Standard with a Cross. (Photo - R. Brogan)
Some Reference Information:
1.  That is quite a collection of local names above.   But it just points out that nearly all of the stories in Randy Dunavan's Who's Behind the ​Window? intersect other families, businesses, parishioners and friends that resided in Osage Mission - St. Paul, Kanas.  The eighteen family stories, plus some of the other window stories, end up being a "Who's Who"  and the "What Was Happening?" of Osage Mission - St. Paul and much of our southeast Kansas region.  The brief John Butler profile above, was distilled from about 20 pages of Randy's book.
Oh!  And don't forget the Alice Gander Books that are also available from our site or directly from her!