2. The Osages Enter Kansas.
The Osage and their French trading partners opened the doors of civilization and commerce in southern Kansas.  Much of the progress occurred here at home in present day Labette, Neosho, Montgomery and Wilson Counties.   But as the Osage themselves left our area, doors closed behind them.​
​Auguste Chouteau’s 1794 Fort Carondelet agreement provided an exclusive trade grant with the Osage until 1800 and strengthened a Chouteau fur trade monopoly.  The Chouteau’s were able to maintain their monopoly for about two years after expiration of the agreement. 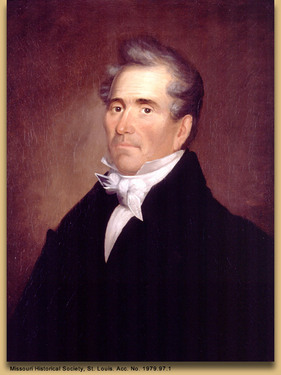 Manuel quickly established himself in the fur trade with a reputation for being industrious, aggressive and adventurous.  In 1802 he was granted exclusivity to trade with the Osage on the Missouri and Osage Rivers; thereby interrupting the Chouteau lock on Osage business.  However, this monopoly ended when Upper Louisiana was transferred to the United States in 1804.  At about that time Pierre Chouteau was appointed United States Indian agent to the Osages, further strengthening the Chouteau-Osage alliance.
Chouteau’s Move into Oklahoma and then North.
Lisa’s short-term interruption of the Chouteau’s Missouri trade monopoly might have stimulated them to expand west.  As early as 1796 the Chouteau’s had established a trading post on the Neosho River near present-day Salina, Oklahoma.  They later established a post on the Verdigris in northern Oklahoma.  By the time of the Lisa interlude, they were familiar with the territory and Pierre Chouteau persuaded as many as 2,000 Osage to move to the Three Forks area near present-day Muskogee and Fort Gibson.

This was a shrewd, strategic decision.  The Arkansas River was a reliable and navigable trade route back to the Mississippi.  Also, the Arkansas, the Neosho and the Verdigris were rich in fur game and the rivers were navigable routes north into southern Kansas.  The Osage and other tribes knew that the area known as the Great American Desert was much more fertile and friendly than white explorers had claimed.  In fact areas surrounding tributary junctures with the three rivers had large, dense forests that offered abundant hunting and lumber for building.  Word of favorable hunting and lodging opportunities traveled to the Missouri Osage as well as the relocated Oklahoma faction.

Map of Osages Migration from Missouri and Northeast Oklahoma.
​Southern and Southeast Kansas.
It is not known exactly when the Osage established a significant presence in southeast Kansas but 1810 is probably a good guess. Shortly after Fort Clark (Fort Osage) was established (1808) it was noted that a portion of the Osage Nation had relocated from the forks of the Osage River in Missouri to the banks of the Neosho in present-day Labette County.   This was about the time the Chouteau’s opened a trading post near the juncture of the Neosho River with Flat Rock Creek.

Doors Close Behind Them - 1825 Treaty.
Some of the tribes were forced to move west.  The infamous 1838 Cherokee Trail of Tears is the most publicized outcome of Andrew Jackson’s May 28, 1830 Indian Removal Act.    The Potawatomi Trail of Death, which ended in Linn County, Kansas, in 1838, was another dark moment in our history.  The Indian Removal Act authorized Jackson’s government to deal with the “Indian Problem” through negotiations that would move the tribes west of the Mississippi River and eventually into the plains of the Great American Desert.  In several cases the movement was done by armed soldiers who left graves of the very young and very old behind them.

By contrast, the Osage were able to negotiate their way west a few years prior to the Indian Removal Act.  The Government might have taken a softer hand with the Osage Nation because they were large in numbers and stature. According to Louis Burns, the total population of the Osage, in 1815, was about 12,000.  An Osage Warrior, in full regalia, including shaved head and his tall, quill roach might tower to seven feet in height.  Shortly after the turn of the century they occupied Missouri and Oklahoma as discussed above and were present, in northern Arkansas. They also claimed the plains from Missouri to the peaks of the Rockies to be theirs—but some others did too.

On June 2, 1825 William Clark and members of the Osage Nation met in Council Grove, Kansas and signed a treaty. The treaty included fourteen articles and under terms of the first article the Osage ceded their lands in Missouri and Arkansas.  In return they received a tract of land that stretched across much of the southern border of present day Kansas with Indian Territory (now Oklahoma).  The tract was fifty miles wide, measured from the northern border of Indian Territory (present Oklahoma), north to just north of the present Neosho-Allen County line.  The eastern border was the western edge of the Cherokee Neutral lands which, using current boundaries, was about ¾ mile east of the Neosho-Crawford County line.  From there the tract extended west to the 100th meridian (near present Dodge City). The new reserve was to be theirs as long as the sky was blue and waters flowed.  They would be gone in about 45 years and the tribe would be nearly decimated before they left Kansas.

The Osage and French Pull Commerce, Civilization and Religion into Southern Kansas.
Even before the treaty was signed, large numbers of Osage had begun an exodus from southern Missouri into Kansas.  Many of their numbers would remain near the eastern end of the reserve—in present Labette, Neosho, Montgomery and Wilson Counties. Others would settle farther west near present Arkansas City.   As they entered eastern Kansas their French Trading partners came with them bringing the earliest elements of civilization into the area.  As they entered:
Go to:  3.  The Earliest Commerce in Southeast Kansas - or - Story.
Some Reference Information: