U.S. Census Data — According to an Osage Mission Journal Article, We Reached About 1,400 in the Early 1880's
The banner illustration shows a couple of monastery students standing in front of one of the city-limits signs proclaiming “900 Fine People.”  That photo was probably taken around 1965 when novitiate student Steve George was here.  I remember the signs, but I cannot say for certain that we ever achieved the number.  The signs might have reflected a sense of community optimism — 'By Gosh, We Are Going to Get There!'
Optimism!
Optimism reigned supreme in those days and why not?

St. Paul was a very self-sufficient community.  Folks didn’t hop in their car and go to Parsons, or anywhere, for many of their needs.  I recall a period in the 60’s when there were four grocery stores here in town.[1]  One of those stores (Owens) also offered dry goods, as did their next door neighbor Paul Munding’s and Paul's $4 bluejeans wore forever.  We had three restaurants, a hardware store, two liquor stores, Ben Crager’s Pool Hall, a creamery, barber shop, an Electrical–Radio-TV repair shop and three service stations as well as Gene Groner’s auto repair shop.
In March of 1960, the Graves Memorial Public Library was formally turned over to the Mission Township board.  By then the library project was firmly on its feet; and the library was located in the old Dick's Studio which was on the south side of Central street near the current library building.[2]

In November of 1960 it was announced that a new post office building would be built on the southeast corner of 5th and Central.

A few years earlier (1958) three area men filed Articles of Incorporation to begin Hy-Grade Construction and Materials.[3]  The original intent was to acquire land for the extraction of sand, gravel and construction materials.  When the Loretto property came up for sale in 1962, Hy Grade purchased much of the land south of town and expanded their business to include farming, ranching and pecan production.   With Hy Grade, the O’Brien Rock Crusher and several other businesses there were enough local jobs to support several families.

In 1961, my own family relocated their business to St. Paul from another community.  Brogan and Norris Grocery served us well until my parents and my aunt and uncle retired in 1974. The business continued to support families for years afterward.  The enlarged building is now occupied by Mission Construction Inc.

​A sense of optimism is reflected in a small pamphlet published by Fielding Hopkins [4] in 1961.  The booklet starts by describing an outstanding “Year of Progress” that was highlighted by the completion of the new Wildlife Game Refuge, the Roadside Park and several new or recently remodeled homes.  The first photo shows the new St. Francis Parish Hall which was completed in 1960 at a cost of $65,000.  Click on the cover to open a PDF file of the document.  (This document is part of the Graves - Hopkins Collection at the Osage Mission - Neosho County Museum, St. Paul.) 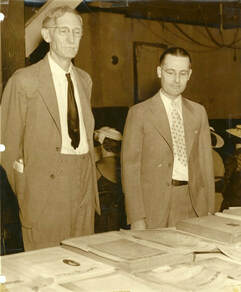 W. W. Graves (L) and Fielding Hopkins (R) Were Among St. Paul's Strongest Boosters. Photo in Mid-1940's (?)
Community Awareness.
A simple fact of the time was St. Paul had a group of active civic leaders who promoted the town, it's businesses, schools and other features.  The term “City Fathers” comes to mind, but it really doesn’t work.  Some served in city government but not all of them.  The women’s Home Demonstration units also played an important role in boosting the city projects.  The leaders were a group of men and women who had a strong interest in seeing the community succeed.

A common link among the group of leaders was businessman, publisher and historian William Whites Graves.  Graves died on July 22 of 1952; but it is certain that nearly all of the local leaders attended the Graves banquet seven weeks before his death.[5]   They had read his books and Graves had taught them that the Osage Mission/St. Paul story was among the  most remarkable stories in Kansas and the four-state region

Each of those leaders had a stake in St. Paul’s success — they had skin in the game.  Based on the gift of knowledge that Graves had given them, they knew that as long as St. Paul preserved its remarkable heritage, it would be OK — and so would they.  In effect, they were an informal historical society.[6]
It Wasn’t All Good.
The young men shown in the banner photo were likely in the 1964-’65 St. Francis Monastery Novitiate Class.  The 1966 Novitiate would be the last one, and that marked the weakening of the relationship with the Passionists that started in 1893.  In 1985 the monastery closed. In 1987 the last Passionist priest left St. Paul.[7]  The departure of the Jesuits and Lorettos in the 1890's, combined with the end of the Passionist era were painful milestones that diminished our missionary and historical awareness.
Some Examples:
Here are some more family names that have left our city during the past 48 years:  Aikins, Ashcraft, Balfay, Bozone, Buchanan, Burkhart, Carroll, Christman, Circle, Clarkin, Coombs, Cox, Dick, Delange, Dunavan, Eberwein, Eisenbart, Ensch, Goodsel (Two married daughters of a family of eight remain.  Another daughter lives north of town.), Fox, Frost, Haverly, Hawkins, Hazen, Hentzen, Hopkins (Daughter Karen Steinbacher remains, pending a home sale), Joyce, Kiister, Koenig, Lancaster, Laudick, McCall, Merry, Moody, Moriarty, Mullen, Munding, Nunnink, O’Rourke, Owens, Phalen, Ryan, Slattery, Titus, Volta.  And there are more that might pop out for some of our readers.
Some Reference Information:
1.  In 1960 there were two grocery stores.  Owens Department Store near the west end of the Central business area; and Ensch’s at the opposite end.  In February of 1961 Art Goodsel started construction, at the corner of Main and Washington, of a building that would contain a service station, garage, cafe and a grocery store (Later became the Lodge – now empty).   In October of that year my family began construction of Brogan-Norris Grocery which is now Michael Beachner’s Mission Construction office.

2.  Prior to transfer of control to the township, the library board was made up of women from three local Home Demonstration Units.  During the late 1950’s W.W. Graves strongly recommended that St. Paul start a library and he seeded it with books from his personal collection.  Knowing his days were short, Graves delegated the project to the women’s Home Demonstration organization knowing they would get it done.  Many of the Home Demonstration units, in various communities, were very effective project management teams.  Follow THIS LINK for more information about Graves and his library project.

3.  The three original organizers of the HY Grade Corporation were George Burkhart and Gene Jacquinot of St. Paul and Harold McAtee of rural Girard.

4.  Fielding Hopkins was a local businessman and civic leader.  The brochure shown above was written by Fielding, the realtor.  But he was also an insurance agent.  He was a nephew of W.W. Graves and worked side by side with him in his newspaper and book publishing business, Journal Publishing.  Fielding’s father, Arthur J. Hopkins, also worked with Graves in several ventures including the A.H.T.A. newspaper and some theaters.  During Graves failing years Fielding “Hoppy” Hopkins kept the St. Paul Journal going until it was sold.  Variations of “Boost Your Community” on the inside cover of the booklet appeared often in Graves’ newspaper and other writing.

In 1963 Mr. Hopkins assisted the Sisters of Loretto with the sale of several hundred acres of land south and east of St. Paul.  He, with other local people, worked hard to maintain a local relationship with the Osage Tribe in Oklahoma.  During the early 1960’s Hoppy also did some early planning and sketching for an Osage Mission Museum and Shrine.  Business and health issues slowed the project.  Fielding passed away on February 12, 1969.

William Whites Graves
​5.  On May 31, 1952, W.W. Graves was honored by state and local officials, journalists, the Catholic Church, and local citizens, for his work in preserving the role that the Osage and the Catholic Church played in the settlement of Kansas.  At the banquet Graves received a Vatican Knighthood of St, Gregory the Great, and became an honorary Osage Chief.  Follow THIS LINK for more information.

9.  Randy Dunavan also donated a copy of the 1960 census to the Osage Mission - Neosho County museum.