11A.  St. Francis Institution for Boys
“There were students in the college from several states and some of them very bright.  A rivalry soon sprang up as to which would make the best grades in the classwork and monthly examinations.  Those who lived here were called “day dodgers” because they attended school only by day.  The outsiders boarded at the college and we called them “nighthawks”  ... As I now look back upon that period I can see how great an influence that rivalry has had upon the years that have followed.  It put “pep” in me, gave me confidence in myself and convinced me I could win if I tried hard enough.  I formed habits that have remained with me and have been potent factors in making the subject of this book possible.”
“Making Money With a Country Newspaper”, W.W. Graves, 1926
​By the time W.W. Graves wrote “Making Money With a Country Newspaper” he was pretty successful.  The small book was his way of explaining to other struggling businessmen how he became successful after a very modest start.  Graves credits his success to three things:It is also apparent from studying his life he was not adverse to very hard work.
​ 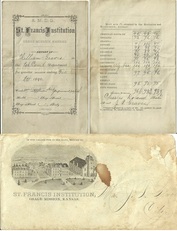 ​St. Francis and its women’s counterpart, St. Ann’s Academy had excellent reputations.   St. Francis attracted students from several distant states and Old Mexico as well as many local boys.  In fact the two school’s reputations resulted in many families settling near Osage Mission because of the educational opportunities for their children.  St. Francis offered a standard college curriculum of history, geography, mathematics, language, rhetoric, composition and grammar with an emphasis on business.  Some of the business classes included; typewriting, shorthand and book keeping.  Being a Jesuit college, the top entry of the student report card was Christian Doctrine.  I hope Mr. Graves doesn’t mind me using one of his report cards as an example. (click image) 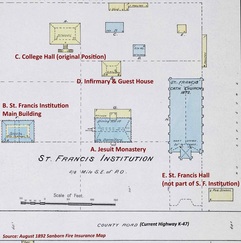 ​The St. Francis Campus.
St. Francis Institution was chartered, by the Jesuits, in May of 1870.  The school sat on the grounds of the Osage manual labor schools.   Using current landmarks, they occupied the area between St. Francis Catholic Church and the existing St. Paul Schools.   The manual labor school structures continued to be used until the new buildings were ready and then they were razed.    The campus consisted of four main structures plus a poultry house, ice house and utility sheds.  Click on the image at the right to enlarge. 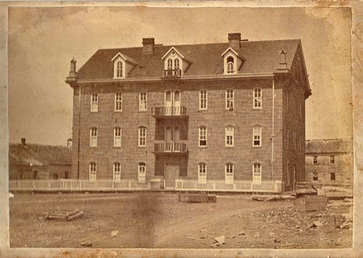 Click to enlarge image.
A.  The Jesuit Monastery.  This was the first of two monasteries built on the lot.  It sat on the same location as the existing St. Francis Rectory.   It was a three-story stone building with a fourth floor under the gable-roof.   It had a 75’x50’ footprint with the long dimension going east-to-west.   The Sanborn fire maps of the era show some frame construction on the back (north) side but photos of that side are unavailable.  It was a large, attractive structure with roof gables higher than the church’s gables.  In addition to housing the Jesuit priests, part of the building was used as a dormitory for boarding students.  Construction of the building was started in October of 1871 and completed in about July of 1873.  It was used until 1912 when the Passionists razed it to make room for a more modern monastery. 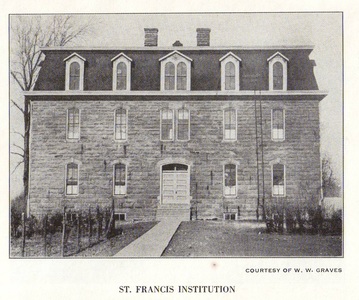 Click to enlarge image.
B. St. Francis Institution.   This was the main college school building.  It sat about 130’ west of the Monastery, or just southeast of the existing high school building.  It had a 60’x45’ footprint with the long dimension going east-to-west.  It was a two-story stone structure with a third story under a mansard roof.  Construction was started in early 1872 and it was completed later that year.  The building was used until the Jesuits closed the school in 1891.  After the St. Ann’s Academy burned in 1895 it was used as the girl’s department until the Sisters of Loretto left in September of 1896.  It was then used as a parish school until it was destroyed by fire in 1921.  The present middle-school building succeeded it when it was dedicated in January, 1923. 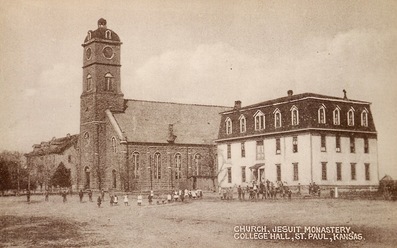 Click to enlarge image.
C.  The College Hall.  College hall was one of two frame structures on the campus.  It was a three-story building with the third floor under a mansard-style roof.  At 60’x44’ it was similar in size as its stone counterpart.  Using current landmarks, the building originally sat near the playground equipment north east of the existing school. During its life College Hall served in three roles for the schools and community.  It was initially a second building for the Institute.  After departure of the Jesuits it served as a parish school building for some time.  When the Passionists began construction of their new monastery in 1912 it was jacked up and moved to a location just east of the church where it served as the parish hall until it was razed in 1961.  It is not known when it transitioned from a school to the parish hall.  Many of the older residents of St. Paul remember the hall when it was east of the church. 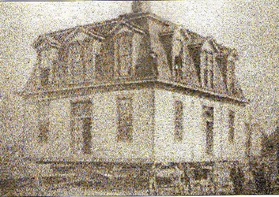 The Infirmary was moved from east of the church to 325 S. Main.
D. The Infirmary and Guest House - Now the Packard Guest House.  The infirmary and guest house is the only building left from the St. Francis Institution Campus—but it has moved.  It was constructed as a 36’x24’ two-story house with the second floor under a mansard-style roof.   The building sat immediately north of the Jesuit Monastery.  I do not know exactly when it was built but it appears on the fire insurance maps during the period between 1885 and 1892.   I also think it served as the medical infirmary and guest quarters for the Institute, St. Ann’s and the church itself. When planning for the modern Passionist monastery began it was directly in the footprint of the new building.  In about 1912 it was jacked up and moved to its present location at 325 Main.  It is now the Packard Guest House. 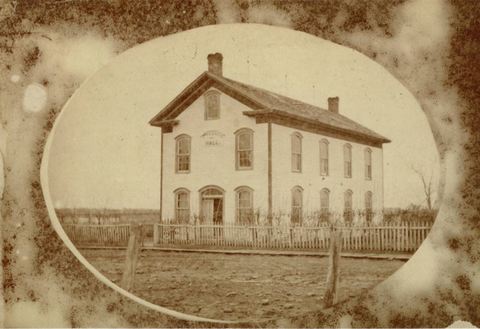 E.  St. Francis Hall.  St. Francis Hall was part of the parish school system—not St. Francis Institution.      But it does have historical significance and is discussed here.   In fact, historian W.W. Graves described it well in “Fr. John Schoenmakers S. J., Apostle to the Osages”:

“The first building of any importance, of frame construction, was erected in 1869. It was known for many years as St. Francis, Hall. At first the lower story was used as a library and reading room for the public. The ladies of the parish, in 1869, organized a library society, and held a social in the Mission orchard to obtain funds. There were a number of Osages still living in the locality, and they attended this social along with the whites. The ladies raised $500 in one day with which to purchase books. With these books, they started, during the fall of 1869, what was probably the first-free public library in the state of Kansas. Socials were held annually afterwards to increase the number of books. For fifty years this library continued to be used by the public. At present part of the books are still in use in the St. Francis school library near St. Paul. The building is now part of the Monastery barn.”  To this I would add that Father Philip Colleton has been credited with starting the library and possibly designing and overseeing construction of St. Francis Hall.
​
I have not seen actual dimensions of the two story building but in examining doors, windows and window spacing I estimate it at about 25’x 40’.  Using current landmarks it would have been in the southwest corner of the St. Francis Church parking lot when used as a school.  As noted above, it later became part of the Passionist Monastery barn after it was moved to the general area of Prairie Mission Retirement Village, north of the church. 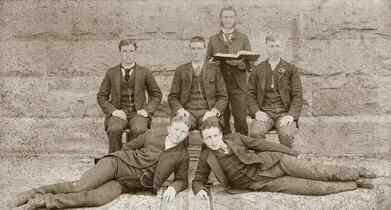 St. Francis Institution Students?
Some Reference Information: *  A confession.  I honestly do not know if those boys were near the St. Francis building or if they were students.  The photos were among other St. Francis Institution items, including Mr. Graves grade cards, when I sorted and archived the Graves-Hopkins collection in 2015.  But there were seven other photos that fit the category "unidentified."  In looking at photos of the St. Francis Institution building and the Jesuit monastery, the large sandstone blocks make sense.  It could be the church in the background, but the foundation isn't quite right.  Still a very neat period photo that fits the story.  There — I came clean and feel better!
* Note:  W. W. Graves wrote a lot, but really didn't say much about himself unless you caught his 3rd person reference as "the Journal Man.  Making Money With a Country Newspaper is an exception.  He talks about himself and it is a pretty revealing look at a man who should be considered a local hero.  The book is out of print with little likelihood of being reprinted.  It would be a great preservation project for someone willing to do an OCR scan and bring it back to life.